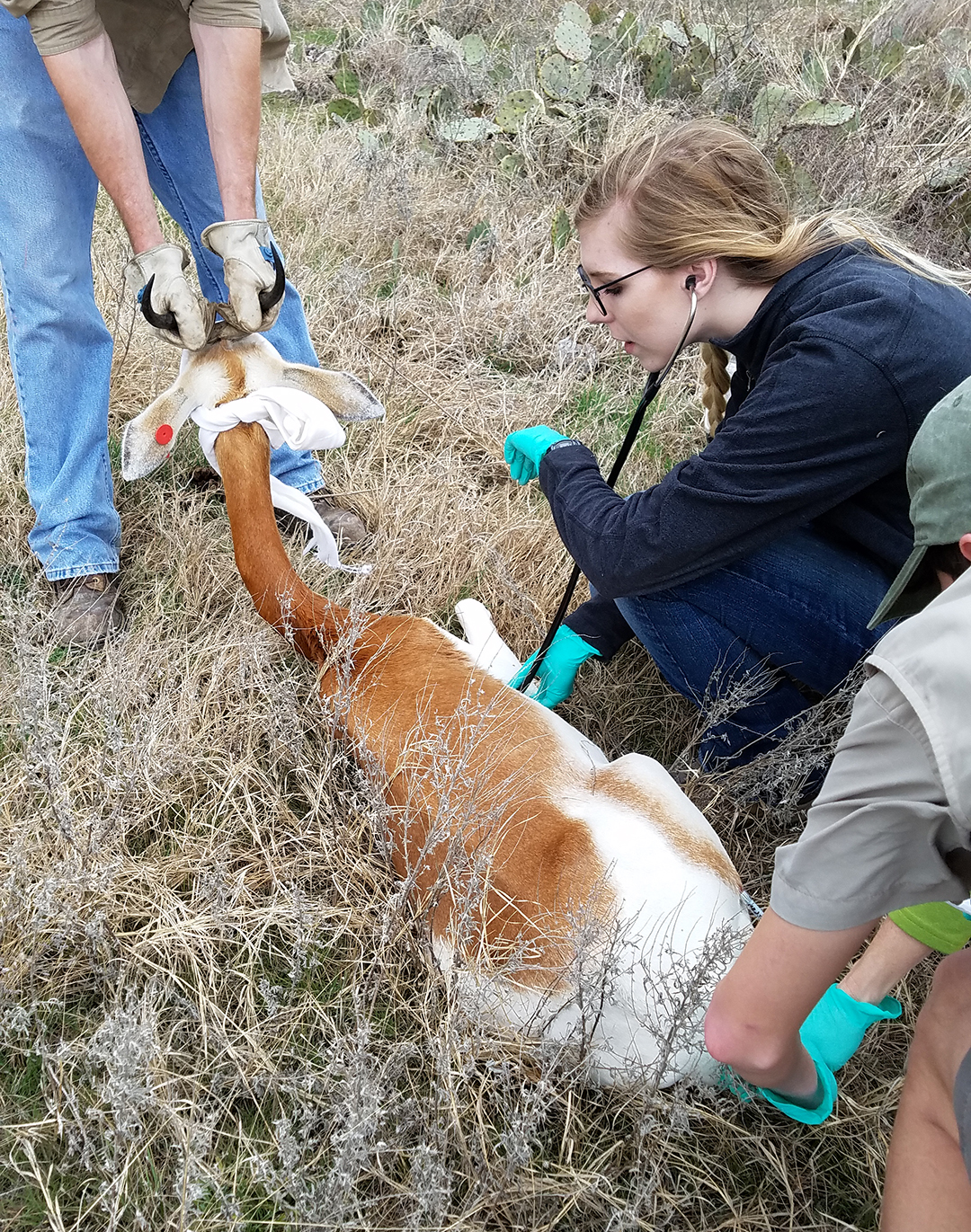 After all, she grew up in Keller, Texas, which is less than 80 miles from Fossil Rim. Many preceptees have never been to Texas prior to their stint at the wildlife center. Technically, she is a native California girl (Laguna Hills), but Lockwood said her time as a Texas youth had her prepared for the adventures that awaited at Fossil Rim.

“I’m from Keller, so I’ve been to Fossil Rim since I was a child,” said the preceptee who trained in the animal health department from Jan. 22 to Feb. 22. “I really wanted to do some kind of work here, so I was looking at externships and saw that Fossil Rim offered one. I knew I really liked Fossil Rim, so I wanted to try it out.

“This was exactly what I was hoping for. There were more rhinos and cheetahs, in terms of the hands-on work in animal health, than I expected. And maybe some bad weather that I didn’t expect, which kept us from doing some things on a few days.”

Set to graduate from Texas A&M University in May 2018, Lockwood is getting her doctorate in veterinary medicine.

She fondly recalled several experiences from her month at the wildlife center.

“Working with the rhinos was memorable,” Lockwood said. “Especially the black rhinos, since they had some medical issues when I was here and we worked with them almost every day. I got really well acquainted with them.

“The pre-shipment exams and vaccinations for the cheetahs were significant to me. We did a lot of immobilizations of wildebeest in preparation for shipment, and you could see how easily they would get spooked after several others had been darted, which limited how many exams we could finish in a day.”

Lockwood said cheetahs and rhinos were her favorite animals to care for.

“I got to work with the black rhinos more, but I have a soft spot for the white rhinos because they are so sweet,” she said.

Shortly before her term was complete, Lockwood gave a presentation to staff and volunteers about anthrax.

“It’s a bacterial disease that’s endemic to certain areas of Texas, and it causes acute death in a lot of exotic hoofstock species,” she said. “It can cause disease in carnivores and pigs, but mainly due to contaminated meats in zoos overseas. More often than not, you aren’t treating it.

“You are finding a dead animal and then attempting to prevent other animals from getting it. The main signs in a dead animal are being very bloated and lacking rigor mortis with profuse, unclotted dark blood coming from bodily orifices.”

Fortunately, she did not have case studies from Fossil Rim to draw upon.

“There wasn’t much research to do here because we aren’t in an endemic area for anthrax, and there are no incidences of anthrax at Fossil Rim,” Lockwood said. “But, we are surrounded by counties that have had cases of anthrax. I gave my project as a general overview so people could recognize it if we ever do get an anthrax case within the facility. It can be very deadly in humans if not treated quickly.”

Lockwood really appreciated spending time with a number of people associated with the animal health department.

“I shadowed closely with (veterinarians Dr.) Julie (Swenson), (Dr.) Holly (Haefele) and (Veterinary Technician) Allyssa (Roberts),” she said. “They showed me a lot of things and shared different points of view while I gained hands-on experience. It was really great working with them.

“I also worked with Dan (Broyles) the volunteer, who is really cool. There was a zoo intern here from Texas A&M for two weeks, (Dr.) Brooke (Griff), and the days we got to work together were great. They are all full of knowledge.”

Between her departure from Fossil Rim and graduation, Lockwood will stay quite busy.

“After Fossil Rim, I’m off to an externship at Smithsonian National Zoo for six weeks, then a two-week externship at Wildlife Center of Virginia before I return to school for final rotations and graduation,” Lockwood said. “From there, I’m headed to Conejo Valley Veterinary Hospital in California to do a one-year internship for mixed small animal and exotic practice.”

All the while, she is thinking even further down the road.

“Ideally, I’d like to go back to school to possibly get my master’s in public health,” Lockwood said. “I really want to be able to travel and work in third-world countries implementing veterinary medicine and public health programs to help prevent animal disease. No matter what, I definitely want to work with exotics.”

She believes the month at Fossil Rim will be very relevant to her future.

“These are all species I will potentially end up working with, so I think all of my experience here will translate to my future career, especially regarding disease prevention,” Lockwood said. “From getting vitals on an animal to using a syringe to building all the day-to-day skills I need.”

A past preceptee pointed out how important it is to apply for this Fossil Rim opportunity far in advance, and Lockwood does not see the point in deliberation on the matter.

“They shouldn’t have to think about taking this opportunity,” she said. “It is different experience than at zoos with all of the acreage and hands-on experience, so it’s valuable for everyone.”

Recalling her visits to Fossil Rim as a girl, the plain-and-simple enjoyment of the experience is not lost on Lockwood.

“It is super fun,” she said. “Outside of The Wilds in Ohio, it is difficult to find an experience similar to Fossil Rim in terms of these close animal feeding encounters in a natural environment.”