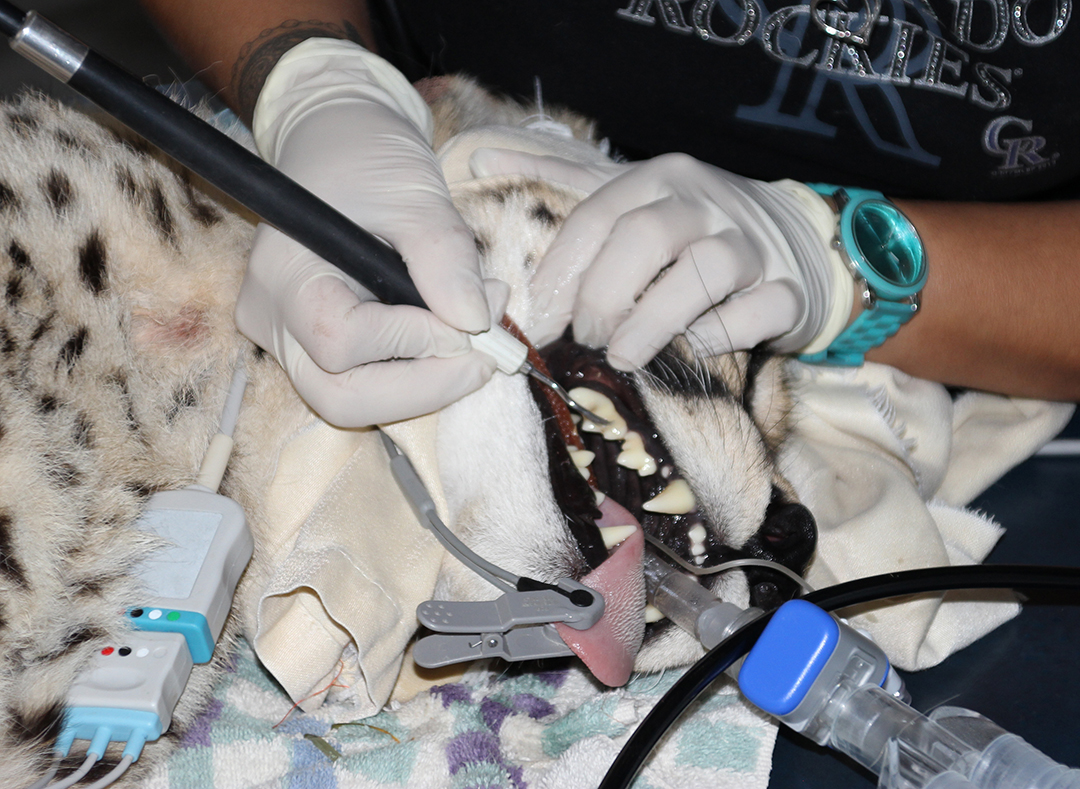 Fossil Rim Wildlife Center Director of Animal Health Dr. Holly Haefele gave a February presentation to interns about her department, and even in an overview approach there was so much to learn.

“In general, that means getting out ahead of disease,” she said. “We need to be proactive, not reactive.”

She began by discussing animal diet, which can be a major factor in maintaining good health.

“When zoos first started, sometimes the dietary needs of a species were unknown, and it was only a matter of time before an animal died from inadequate nutrition,” Haefele said. “In the last 30-40 years, zoo care has come very far. Today, some zoos have nutrition departments that employ zoological nutritionists.”

Proper diet helps animals maintain good body condition, and the appropriate mix of vitamins and minerals helps them function at an optimal level, which is especially important at a breeding center like Fossil Rim.

“Quite a few animals have iron storage issues; here, those are our black rhinos,” Haefele said. “Black rhinos are very good at absorbing iron from their GI tracts. This is not a problem when they eat their normal diet of browse, which is high in iron-binding compounds. Those special compounds, like tannins, do not allow the gut to absorb as much iron.

“In captivity, we can’t perfectly replicate a wild diet, and with fewer iron-binding compounds, more iron is absorbed. When too much iron is taken in, it can lead to disease. We do provide as much browse for our rhinos as possible (10 pounds daily, per rhino, 5 times per week).”

“In 2004-05, we participated in a dietary study based at the Fort Worth Zoo, which led to several changes,” Haefele said. “A key change was in the proportion of pellets to salad mix and insects provided. The birds love to eat salad and insects, but they have limited nutritional value.

“By limiting the salad and bugs, we forced them to eat more pellets. Chick weight doubled, likely giving them a better chance of survival after release into the wild.”

Transitioning to vaccinations, Haefele pointed out that vaccines made specifically for cheetahs or giraffes cannot be found. Her staff counts on common sense in that regard.

Next, Haefele explained the importance of behavioral enrichment to animal health.

“You want to provide an appropriate environment for an animal,” she said. “Limiting stress is important – especially chronic, low-level stress.”

Cheetahs are prime candidates at Fossil Rim to be affected by stress.

“They can develop some diseases we think are linked to chronic stress, such as gastritis,” Haefele said. “Possible sources of stress for them are being on exhibit, as well as males being around a bunch of other males. Studies have shown that males produce better sperm if they have three or fewer (animal care specialists).”

Offering animals the space to have normal-sized family groups may go a long way in helping reduce abnormal stressors. For example, many of Fossil Rim’s hoofstock species live and breed in large groups, often with hundreds of acres to roam.

“Essentially, they do what you would expect them to do in the wild: eat, ruminate, poop, and interact with each other,” she said.

“Our APC chicks move into really big pens before their release, where they can fly and build up their pectoral muscles so they are able to escape quickly when faced with danger in the wild,” Haefele said.

Grooming was the next facet of preventive medicine she addressed.

“Here, we do beak trims and nail trims on birds, plus hoof trims on hoofstock,” she said. “You could argue hoof trims aren’t preventive because the problem is already there, but you can prevent future injury and more prolonged foot problems. For example, we will do that for one of our giraffes in the near future.”

Haefele turned her attention to exams next, and there was a lot of ground to cover.

“Anytime we have a hoofstock animal in hand for another reason, we take that opportunity to do a full exam,” she said. “We take blood and fecal samples. We bank serum and whole blood in advance of being asked for it so we can participate in various research studies.”

On a related note, exams specifically targeting an animal’s mouth and teeth are important.

“Just like humans, having chronic inflammation in an animal’s mouth can affect its whole body,” Haefele said. “When we have a carnivore on the exam table, we always plan to do a dental cleaning.”

For rhinos, carnivores and the residents at the Children’s Animal Center, they all get routine exams. It is typically 2-3 years between exams for a healthy cheetah, which is helpful since there are so many of them at Fossil Rim.

“Looking at a particular animal over time allows you to establish ‘normal’ parameters, which is helpful,” Haefele said. “Normal parameters can differ between institutions, and even individuals of the same species, which is also beneficial to know.”

For carnivores, heartworm disease is a concern, so they receive drugs on a monthly basis administered by the animal care staff. A drug to reduce flea populations is given monthly, while tick medication is utilized occasionally. There is a rotating schedule throughout the year for dewormer.

“For hoofstock, our main worm concern – Haemonchus – can be resistant to a lot of drugs,” Haefele said. “We only treat the animals if they have a problem, which we identify by examining a fecal sample and getting a fecal egg count. It’s very labor-intensive for our hoofstock staff, as far as all the poop collection. I estimated that in a three-month period we did over 300 fecal exams.

“It’s been very rainy (relatively) since 2015, so we’ve seen higher parasite counts. We do (prescribed) burning of our hoofstock pastures to kill larva living in the grass.

“Equids can help control Haemonchus. They eat the larva off the grass and it dies, thus decreasing the pasture load, so combining herds can help. Most of our parasite issues are in the Main Pasture because of the species we have and how they utilize the pasture.”

Considering the Haemonchus parasite has become an increasing issue in recent years, Haefele addressed other methods of combating it.

“Tannins are really effective at controlling Haemonchus, so if you can get your animals to eat enough plants high in tannins it can really help,” Haefele said. “Copper oxide wire particles can kill larva when fed to hoofstock, so we treat our sable and gemsbok herds often with copper.”

While in the stomach of a hoofstock animal, Haemonchus literally drains the host’s blood.

“The host animal can lose one-fifth of its blood volume in a single day and have very few red blood cells left within a week,” she said.

Contraception can play a preventive health role at Fossil Rim.

“We don’t use it much here, but it is extensively used at zoos with limited space,” she said. “An example here would be one of our giraffes who was really small when she was younger, and we worried about her being injured by the bull and safely delivering a calf. We used a drug to effectively prevent pregnancy because she didn’t have enough of the key hormones.

“We also shut down her estrous cycle. Luckily, after we stopped using the drugs and she had grown to a more normal size, she became pregnant and had her first calf in 2017.

Whenever an animal dies at Fossil Rim, the animal health staff performs a necropsy – or animal autopsy – to understand as much as possible.

“It is important to do them immediately,” Haefele said. “Hopefully, we take what we learn and prevent other deaths. APC chicks are a great example here, in regards to identifying and containing a disease. When you have 30 chicks hatching in a day, you need to get ahead of a disease outbreak.”

For protection of animals and people, biosecurity and hygiene are very important to prevent disease at Fossil Rim.

“We wear gloves routinely when handling an animal, and will add other protection if we have a known disease situation to prevent transmission from one animal to another through us,” Haefele said. “For example, we might use a bleach footbath at the APC facility to prevent the spread of very contagious (avian) pox.”

She pointed out that for many diseases animals can get, people are also susceptible. Diseases that infect both animals and humans are known as zoonotic diseases, or zoonosis.

“I have to think about protecting our staff, interns, volunteers and visitors,” Haefele said. “Gloves, masks and rabies vaccines for our animal care staff and animals. Then, for preventing disease transmission from people to our animals, black rhino interns, vet students, and anyone in animal care or animal health are tested for tuberculosis. Rhinos are susceptible to getting it from humans, so we want to make sure people caring for them don’t carry the disease.

“We want to make people aware of the risk and limit their chance of contracting disease. While our animals at the Children’s Animal Center are well cared for and examined frequently by the veterinary staff, animals always carry bacteria. Handwashing is an important step in preventing disease.

“Some people are immunocompromised and at increased risk of disease, including the elderly and pregnant women. Young children are considered at greater risk because they are likely to put their hands in their mouth. It’s always a good idea to wash your hands after touching animals – including other people.”

Animals are frequently transported in and out of Fossil Rim to and from other facilities as they often participate in nationwide breeding programs – cheetahs, for example.

“I want to make sure we don’t bring in anything detrimental to our cheetahs or any of our animals,” she said. “I find out which animals are coming from where, talk to that vet staff about group history, look at that particular animal’s medical record. Testing is done before an animal arrives and many go through a quarantine period based on the level of risk.”

One thing is for sure, after Haefele’s hour with the interns was up they were in a better position to help her with disease prevention at Fossil Rim due to greater awareness.

Yes! Masks are still required if you get out of your vehicle.
X