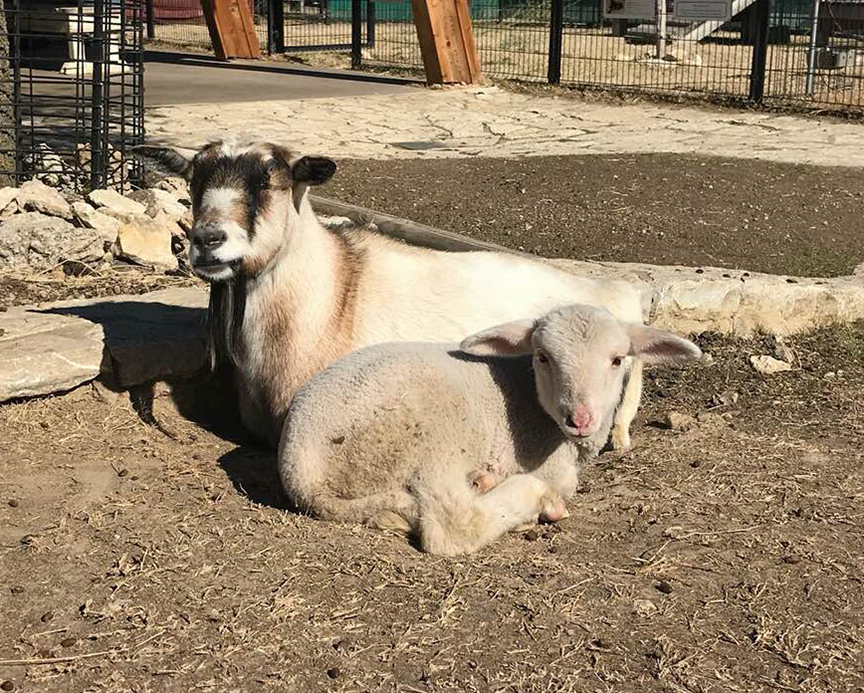 The Children’s Animal Center (CAC) at Fossil Rim Wildlife Center has a new resident, and we are hopeful he will not be sheepish around visitors.

“Earl” is our one-month-old lamb and the goal is for him to become integrated into our free-roaming goat herd.

“Earl was first discovered by a generous family from Alaska on their ranch property in nearby Clifton, Texas,” said CAC Supervisor Kristina Borgstrom. “They were out hunting on their property when they heard the bleating cries of a little lamb.”

Only a day or two old, Early was found all alone with the family unable to locate any sheep in the vicinity.

“The family began to bottle feed Earl and took him into their care,” Borgstrom said. “As they prepared to return to Alaska, they needed to find a good home for Earl and approached Fossil Rim with a proposal. With the help of Fossil Rim’s animal health staff and Mary Jo Stearns, who has a history of caring for young animals at Fossil Rim, the Children’s Animal Center accepted the challenge of hand-rearing Earl.”

Earl relocated to Fossil Rim in the first week of January and was paired with the female goat “Ethel,” who is thus far doing a fine job in a foster-mom role.

“The two of them lived at our neonate facility for several weeks until Earl was given a clean bill of health and had become a champ at bottle feeding,” Borgstrom said. “On Jan. 16, Earl underwent successful castration surgery and completed the checklist of items to be done before he could move to the CAC.”

Earl and Ethel relocated to the CAC a few days later and are settling in. Earl is currently allowed to roam the main yard at the CAC with the herd of goats under staff supervision during slower guest traffic days. On busy weekends, he may be placed in the goat-only pen in the near future.

“While Earl is definitely a handsome young sheep, we ask that staff and guests follow our CAC rules with him,” Borgstrom said. “Our policy is that we ask all guests and staff to please not feed, chase, pick up or sit on our animals. They may only be petted or brushed if they are out roaming the main yard. We ask that Earl not be restrained in any way for photo opportunities to ensure that his experience is a positive, enjoyable one.”

Be sure to visit Earl and all the CAC residents any day for free when you come to the Overlook from 10 a.m. to 4 p.m.