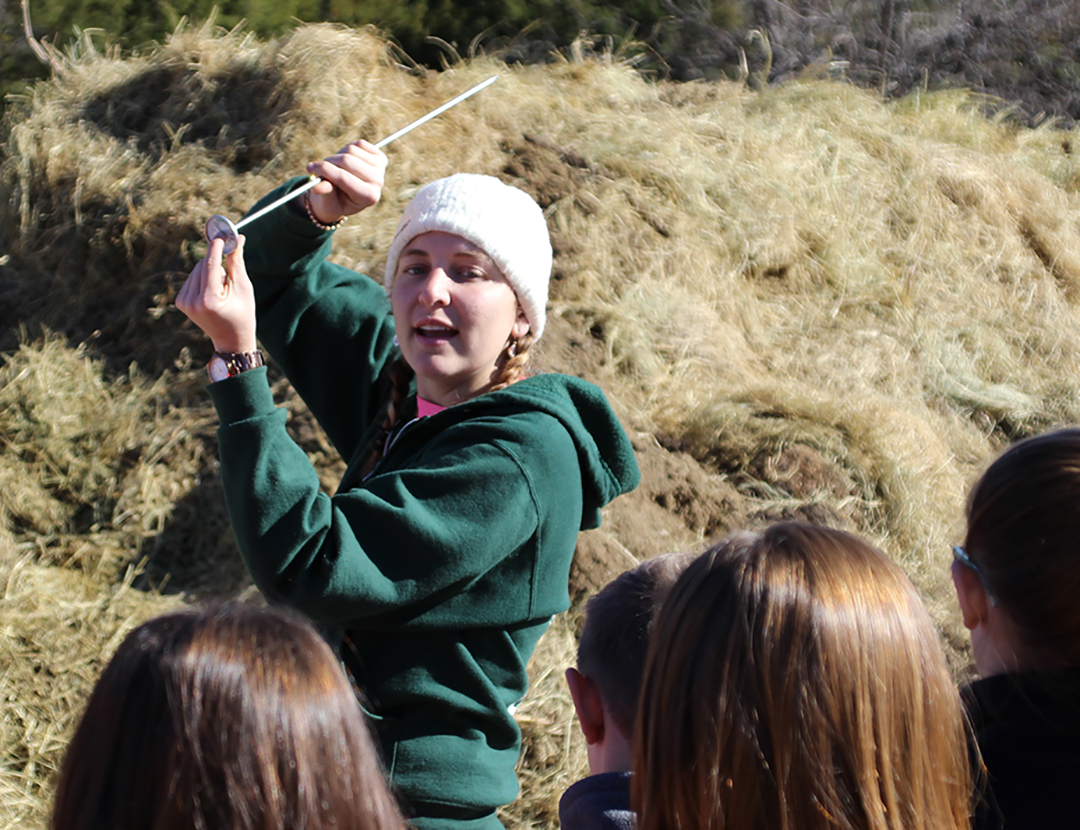 Fossil Rim Wildlife Center and Glen Rose Intermediate School have enjoyed a productive partnership for years now, and a recently added aspect of that team effort led to an educational morning field trip.

Students visited the wildlife facility on Jan. 23 to see the continuous creation of compost they are fueling.

Caitlin Pyle, Fossil Rim recycling and waste conversion coordinator, welcomed three groups of fifth-grade students to the park’s compost area. The students have been tossing food waste items like fruits, vegetables and bread into a compost bin after their school lunches and those materials are transported to Fossil Rim for compost purposes.

“In the spring of 2017, Caitlin approached our campus about collecting food scraps from kids’ lunches,” said Lisa Cox, fifth-grade science teacher. “So, we did a pilot program that summer with 50 students and collected about five gallons of scraps per week. Caitlin picked them up and brought them to the compost piles.

“When school started this year, she came to the campus and talked to each fifth-grade class. At lunch, they contribute the fruits, vegetables and bread they don’t eat into a compost bin. Then Caitlin picks it up or I bring it out here.”

Cox was pleased with the interest she witnessed from the students on the visit day.

“The kids are out here today to see where their food scraps are going, and understanding that it is contributing to fertilizer, which leads to healthy grass for the Fossil Rim animals,” Cox said. “As these three groups are riding the bus back to school, I hear the kids being astonished at how much compost there is. I think they are taking home a badge of honor – proud to know they are contributing.”

“Animal care staff stops by to dump hay that was uneaten or used as bedding, as well as manure, at the edge of a windrow,” Pyle said. “I move and manage it as I need to among all the windrows.”

Most of the manure is from Fossil Rim white rhinos, but there is also manure from Grevy’s zebras, Przewalski’s horses and sometimes giraffes.

“We get more giraffe manure in the winter, since it is only collected when they are in their barn,” Pyle said.

“Quality compost is all about having a good balance of ‘browns’ and ‘greens,’” Pyle said. “Browns are carbon-rich materials like dried leaves, hay and wood chips. Greens are nitrogen-rich materials like grass clippings, vegetable and fruit scraps, and animal manure. The students have been taught not to put items like meat or dairy products into the school’s compost bin.”

Pyle mentioned that, thanks to decomposition, the composted material only has 25 percent of the mass it did originally. She brought a compost thermometer to show the students and explained that she takes the temperature in different areas of the windrows. Compost piles actually emit visible steam when the surrounding air is cold, as was early on this particular morning.

“(The steam) is produced by healthy, active organisms in compost,” Pyle said. “The heat is due to decomposition of high-nitrogen organic matter because of the activity of numerous organisms.”

The optimal temperature for a compost pile is 131 degrees, and the temperature would actually need to reach 300 degrees before spontaneous combustion would become a concern. Looking down the line of a windrow, students were surprised to see the heat shimmer visible against a backdrop of trees.

Organisms that facilitate the decomposition can include microbes, worms, snails, insects and fungi; although Pyle said the heat of these windrows is usually too high for earthworms to be found. The organisms break down the organic material aerobically, which means they use oxygen to do so. Bacteria are the powerhouse of the process, as they break down the matter to create carbon dioxide and the aforementioned heat.

Pyle talked about regularly turning – or aerating – the compost pile. This is important for the aerobic process, although as compost matures it is alright for the pile to be turned less frequently.

Pyle found a piece of plastic in one of the windrows and used it as a teaching moment, while the students seemed troubled that it may have come from their compost bin.

“Plastic does not decompose, so you all please make sure you never throw away any plastic with your food scraps at school,” she said.

Fossil Rim has 110 acres of hay fields, so the need for compost to promote grass growth is significant.

“We use compost for our hay and grazing fields, but also beautification projects around the facility such as when we recently needed to grow new grass at the Children’s Animal Center,” Pyle said. “When the new road was built for the Gosdin Scenic Drive, we used compost where the old road used to be in order to help that area grow back to its natural (vegetative) state.”

The interest in compost and the school’s contribution was evident from the students.

“It’s kind of cool to see where our food went, because if you think about it, an orange can eventually turn into soil,” said Nicholas Itayem, a fifth-grader in Cox’s class. “That all the little scraps of food can turn into these big piles (windrows) is mind-blowing.”

Josalyn Franell is a fifth-grader in Ruth Ann Emerson’s class.

“It was really interesting to know that all the bacteria are moving around to cause all this energy,” Franell said. “I think it is neat that it takes up to a year to produce compost. I have family in Oregon who have a compost pile.”

In fact, most of the students in the third group said they know someone with compost at their residence.

Itayem said he contributes orange peels and strawberries to the compost bin at school.

“It is interesting that all the bacteria can make huge piles of nice, fertile soil that helps grow all the hay they use at this giant facility,” he said.

“Our teachers make sure everyone is putting the right things in the compost bin,” Franell said. “We should keep doing this in higher grades because it contributes to Fossil Rim.”

Pyle is hopeful that will be the case in the years to come.

“The goal is to take this program on to Glen Rose Junior High as these fifth graders make that campus transition,” Pyle said.

“I want to thank you all for your food contributions,” he told them. “Without you, our compost wouldn’t be the same.”

People who live in the Fossil Rim area and would like to step up their compost game should consider joining Pyle Feb. 22-24 for her Master Composter Training workshop. To learn more about it, go to https://fossilrim.org/special-events/ and find it in the February listings.