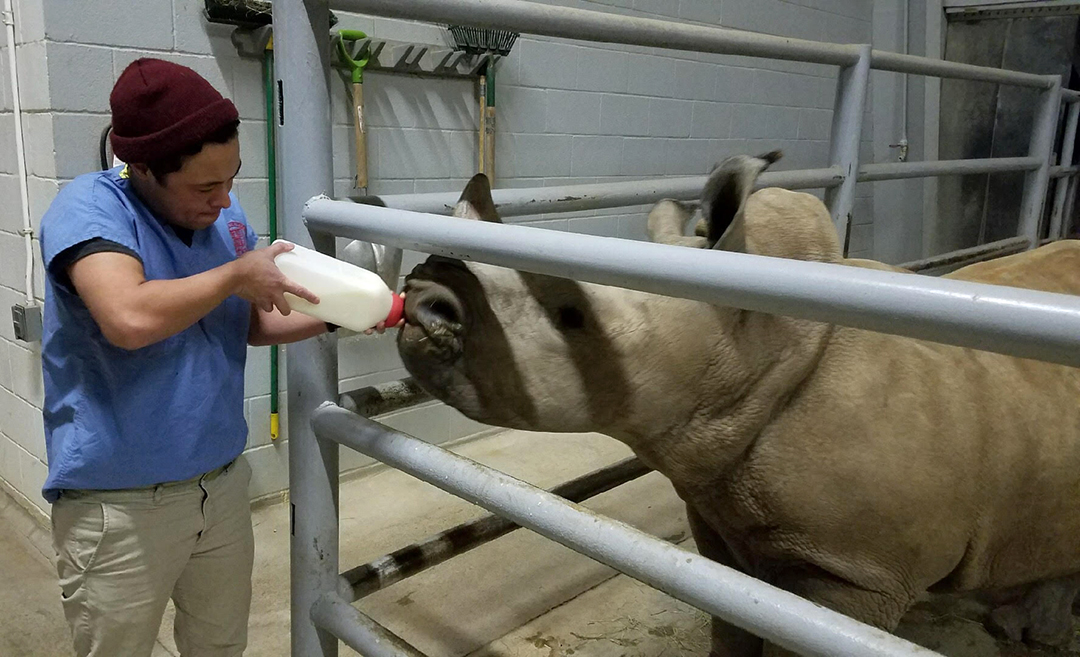 Many years before he would arrive at Fossil Rim Wildlife Center to gain hands-on experience, Julian Rivera could see animals in his professional future.

“When I was little, I wanted to be a biologist, so this is the way I decided to go,” said the veterinary preceptee who lived and learned at Fossil Rim from Dec. 3 to Jan. 19. “I was known to be forgetful as a boy, and for a fourth-grade presentation about tigers, I’d forgotten my paper at home. To my surprise, I recited the whole paper from memory for the class. I think, when you are interested in something, it takes you to the next level.”

The Chicago native attends Cornell University in New York on the zoological and wildlife medicine track. His graduation is set for May 2018, and Rivera got his undergraduate degree in neuroscience at Smith College in Massachusetts.

Word-of-mouth was key to his Fossil Rim interest.

“Some of my professors have a history with Fossil Rim, including Robin Radcliffe, who was formerly a director here,” Rivera said. “Steve Osofsky and my advisor Alexander Travis also gained experience here. I really wanted to follow in their footsteps. Especially when you see somebody doing what you want to do, you want to know how they got there.”

Rivera had done a prior externship at a traditional zoo.

“This was so different,” he said. “I knew the animals would be free-ranging, but it’s like humans are the ones in the enclosures here. I found it hilarious when I would be outside doing my laundry at the intern house and people would drive by – I was the one behind a fence, not the animals.”

He was also surprised to experience so many immobilizations and the speed and efficiency at which the staff performed them.

Regarding experiences that stood out in his mind, Rivera reeled off quite a list.

“Everything we did with the cheetah cubs was amazing, especially the exams,” he said. “Doing vasectomies on cervids (deer) could come in handy in the future. First, we staged a surgery and I did a lot of research on the procedure. Then, I watched several vasectomies start to finish, assisted with anesthesia and paid attention to every little detail.

“(Dr.) Julie (Swenson) had me walk through it with her verbally. Next, I did half of the procedure before completing one by myself; it was cool to progress to that point.

“Feeding ‘Jiwe’ the white rhino calf was really special, and I was also surprised how much I liked working with the Attwater’s prairie chickens (APC). We had to amputate a wing after repeated fracture and there was a lot of bandage changing involved, but the bird did really well.

“The plan was for him to live at the Children’s Animal Center; I think it’s really important for kids to see the native Texas animals and feel a connection toward them. Working with the APC staff through that process was really interesting.”

Rivera mentioned one more species that caused him to have a “moment.”

“We were vaccinating Mexican gray wolves, which involved a lot of people to capture these very wild animals with nets and do a quick vaccination,” he said. “I had an epiphany that this is what I need to do for the rest of my life; I could really see it in that moment.”

Rivera talked about the staff members who helped him get the most out of those six weeks.

“Obviously I worked the most with (Dr.) Holly (Haefele) and Julie, the veterinarians, and Allyssa (Roberts), the veterinary technician,” he said. “They were really good influences on me. At school, we get a relatively narrow spectrum of influential people who followed a certain path, but these two (veterinarians) didn’t go through the traditional path of internship and residency. Meeting people who made their own way changed my idea of how you can become a veterinarian.”

Like all Fossil Rim preceptees, Rivera recalled many educational van trips across the park’s acreage.

“Julie did a lot of taxonomy lessons and provided a lot of background info on what we were going to do,” he said. “It’s important when treating an animal to know how it fits into the overall scheme of animal classifications, so I appreciate her taking the time to do that. A lot of the technical stuff regarding lab work that is done here isn’t taught to vet students at school, especially with nontraditional species, so I also learned a lot from Allyssa.

“Avian blood cells are very different from those of mammals, so bloodwork on birds is really complicated. Allyssa walked me through that sort of lab procedure.”

He came to view the animal health department as a bridge of sorts to connect the various staff members of animal care.

“I worked with just about everybody in animal care, which is awesome because the vet staff seems to be the connection between all the different animal departments,” Rivera said.

Shortly before leaving Texas, Rivera presented a project he had been working on to staff and volunteers.

“I focused on assisted reproduction in captive cheetahs,” he said. “Here, we have the ability to do natural breeding, but in a lot of zoo situations female cheetahs aren’t able to have their normal reproductive cycles and the males aren’t as fertile as they would be in the wild. I looked at the possibility of enhancing genetic diversity through breeding, and some of the new medical procedures being used across AZA facilities to aid in cheetah reproduction.”

Only time will tell if he returns to Fossil Rim one day, but that is a notion Rivera can get behind.

“It would be amazing to work somewhere like this,” he said. “I’m really interested in the study of wildlife diseases. The dream is to work at an AZA-accredited institution and do disease research.”

He pointed to the applicability of many Fossil Rim experiences in professional situations.

“The day-to-day experience – knowing what it’s like to work at a place like this is critical,” he said. “The different techniques and protocols that I learned for things like immobilizations are invaluable. Learning how to find the information I need in an efficient way is important.

“The mentorship from the vet staff was crucial. I was able to ask them every question I could possibly think of, whether it was career-related or about a given procedure we were doing. And, of course, actually doing the work myself instead of just watching made a huge difference – hands-on experience.”

When asked about what he would want prospective preceptees to know about Fossil Rim, Rivera pointed to a potential difference-making consideration.

“I would stress the need to apply in advance – more than a year,” he said. “I applied two years ago, so keep that in mind. Also, this is one of only a few organizations in the U.S. capable of offering an experience in this vein, so don’t come here expecting a regular zoo.”

He thinks the beauty that Somervell County offers in conjunction with some surprising residents will make an impact on the park’s first-time visitors.

“This is a gem in the middle of Texas,” he said. “You wouldn’t expect to find a rhino, a cheetah, or a maned wolf and see them this close. I think it gives you a connection to these animals, seeing them act like they would in the wild among herds.

“Go to the Overlook Café and look out across the land. It’s a beautiful place.”