Staff Puts A Lot Of Stock In Hoof Care 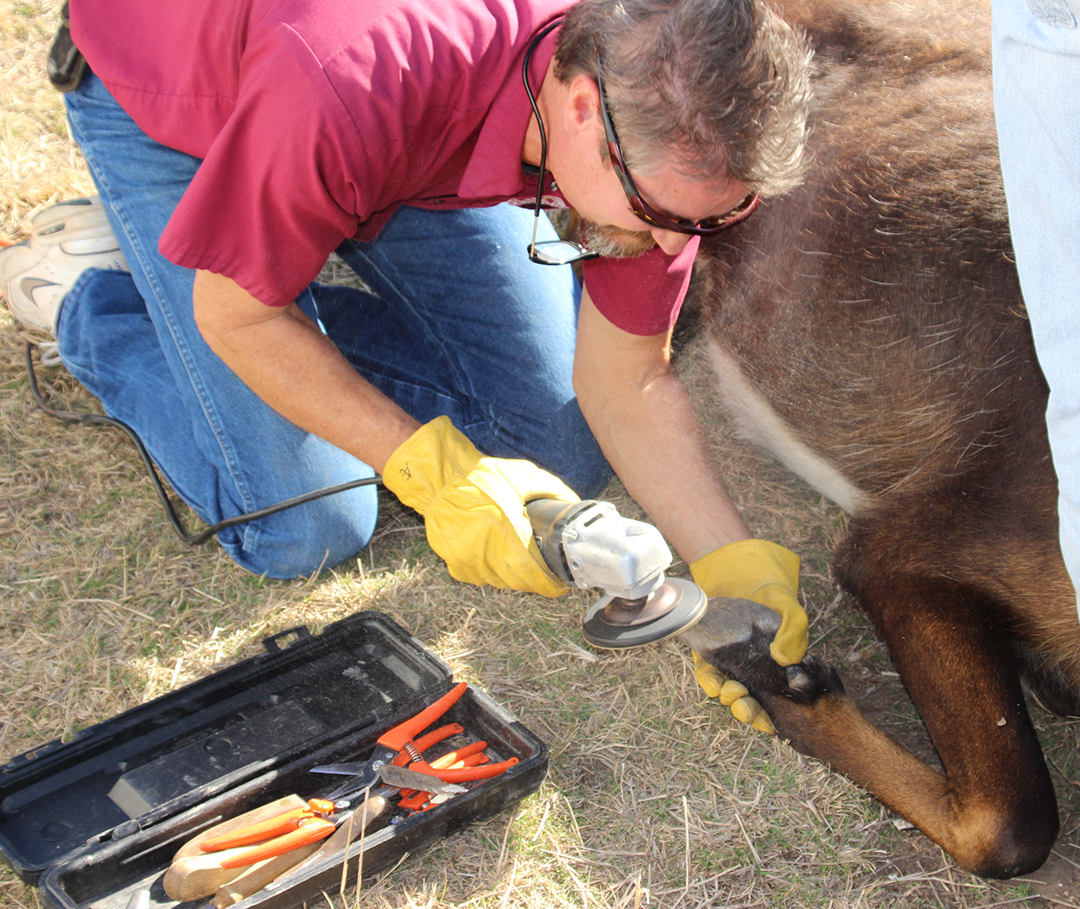 Hoofstock is a term used to describe many of the species at Fossil Rim Wildlife Center. As it turns out, hooves themselves are paid a lot of attention.

When an animal’s hooves are not growing properly on their own, Fossil Rim staff members will often intervene.

“Some of our species need our help regarding their hooves,” said Dr. Julie Swenson of the animal health department. “In part because the substrate is different here compared to their native land, plus the amount of travel they do on a daily basis is different here than in the wild. So, we have hooves that get overgrown. If you allow that to continue, it can make it difficult for the animal to walk and lead to injury later on.”

In early January, a day was devoted to hoof trims of multiple sable antelope.

“Sable, as a species, are not necessarily more prone to hoof overgrowth than our other species,” Swenson said. “However, we have a couple of individual animals in that herd that are more prone to having their hooves grow long. One reason can be if they had a previous injury to a hoof and it isn’t bearing weight appropriately, which can lead to arthritis further up the leg and that one hoof growing longer. Or, potentially if you had an animal on a higher protein diet for a while – maybe due to an illness – protein and a variety of other nutrients can trigger faster hoof growth.”

It is difficult to make overarching statements on hoof growth, according to Swenson, because it often depends on the individual animal and at Fossil Rim it is usually substrate-related as to which species have faster hoof growth rates. On that note, the terrain makes Fossil Rim’s aoudad susceptible to hoof issues.

“Our aoudad are a mountain species that climb onto rocks all the time in the wild,” she said. “We don’t have as much of that here, so they are more prone to hoof problems than some of our other animals that are more adapted to grasslands.”

“We have several species where their native habitat is fairly close to Fossil Rim, and those species tend to fare better here in regards to hoof growth,” Swenson said. “But, even in those fairly resistant species, you will still have occasional individuals – typically secondary to an injury or a conformational problem – that will have overgrown hooves and require the occasional trim.

“There are even areas within the park that are better for the hoof types of certain species than others. We have moved animals to a different pasture before for that reason, such as Grevy’s zebras now upon the rocky terrain of the Grevy’s Pasture. We move our Przewalski’s horses out of the grassy Klein Pasture when their hooves start to grow too long, and then they will chip down those edges in a rocky pasture.”

Sometimes, guests will mention they would like to purchase extra animal feed, but Fossil Rim’s animal health department put a limit in place and hooves played into that decision.

“The high-protein diet here also means high calories, which a lot of these animals would have a limited supply of in the wild,” Swenson said. “Especially in a drive-thru safari setting, if the public is feeding large amounts of feed, it can actually negatively impact an animal’s health with hoof growth being a key result. Then, we have to work harder to keep those hooves under control.

“That’s why we limit the amount of feed we sell to the public. They have enough feed to attract the animals and see them up close, but not enough to contribute to problematic foot growth. Overfeeding has other important negative effects, such as obesity and changing the balance of an animal’s diet.

“Hoofstock require a large amount of fiber and roughage. We prefer them to get at least some of that through hay, grasses and browse, as opposed to pellets.”

Before a hoof trim can be planned, staff must identify the need.

“Animal care (staff) is definitely the first step for us to find out about hoof overgrowth,” Swenson said. “They are checking on those animals every day, keeping an eye out for overgrowth and when it becomes significant enough to warrant anesthesia for a hoof trim. If an animal is lame, seems withdrawn from the herd or can’t keep up with a moving herd, animal care lets us know it should be prioritized.”

Swenson detailed the general process for a standard hoof trim.

“First, we must find the particular animal we need, and ear tags make that easier,” she said. “You then dart the animal with anesthetic, which acts rapidly and puts the animal under anesthesia within 5-6 minutes. Then, the hoofstock staff manually restrains the animal to keep it in a good position.”

To briefly interrupt the steps, when an animal is being restrained it is interesting to understand why “pool noodles” are involved.

“The pool noodles are actually horn hoses,” Swenson said. “There is a hose much like a garden hose on the inside, and then the foam structure everyone sees. The horns on these animals are very sharp, and if they are even moderately light on anesthesia they can toss their head and injure someone if we don’t use the horn hoses.”

After the animal is restrained – depending on the drug combination used – animal health staff will usually intubate the animal to aid breathing. Then, the work on the hooves, or a particular hoof, begins.

“We clean out the hoof with a hoof knife or pick to make sure the base of the foot can be seen,” Swenson said. “You even out the sides of the hoof wall, take off the extra bit of the toe to make the hoof shape as normal as possible. There can be several instruments involved – nippers, cutters and files. Then, a grinder is used along the bottom to even out all surfaces.”

While this process is underway, Veterinary Technician Allyssa Roberts has taken a blood and fecal sample, left the pasture and headed back to the clinic to analyze the samples before calling to report results.

“We don’t want to anesthetize these animals multiple times if we don’t have to, so we take advantage of the opportunity to look for other problems at the same time,” Swenson said. “That typically includes a check for parasites. One of the parasites we have here can cause the host to become anemic, which results in low red blood cell count. During a hoof trim, the technician usually draws the blood sample and perhaps a fecal sample, takes it back to the clinic and runs those tests.

“Then, we get a call telling us what the PCV (pack cell volume) and fecal egg count are. A high fecal egg count or low PCV means we will give the animal additional treatments before we wake it up.”

While the quality of the work being done is important, the veterinarians stay mindful of the time an animal is under anesthesia.

“We want to use the least amount of drugs possible during a procedure, so that means working as quickly as possible to reduce or eliminate the supplemental drugs needed after anesthesia,” Swenson said.

When the hoof work is done, the anesthesia is reversed. Depending on the protocol used, the reversal is often performed with two different drugs.

One is administered intramuscularly and the other in a vein. Within 3-8 minutes, the animal is standing and rejoins the herd.

“If an animal doesn’t get up quickly or seems still sedated and stumbles, other members of the herd may come over and injure that animal,” Swenson said. “It’s not always malicious; they may be worried the animal will get attacked by a predator, so they may be poking and prodding it to get up. They don’t understand that animal is incapable of returning to the herd at that moment, so they often injure it accidentally.”

On that note, after this particular sable awoke, Ben Jernigan of the hoofstock staff stayed beside it in his truck until it was able to stand up and walk away.

Sometimes, even Fossil Rim’s largest animals need to have their hooves addressed.

“Giraffes aren’t necessarily harder to trim the hoof on than our other animals, but they are much harder to anesthetize and there are more possibilities for complications,” she said. “We do usually involve a farrier for the giraffes, since that allows us to focus on the anesthesia more specifically. Luckily, we don’t need to do much hoof repair on our rhinos, but it happens occasionally. For example, our white rhino bull ‘Bernard’ had some toenail issues when he arrived that we had to work on for several months.”

The animal care and animal health departments often work closely at Fossil Rim, and hoof trims are a prime instance.

“This is definitely a good example of the teamwork between animal care and animal health,” Swenson said. “Animal care staff are the ones initially looking at the animals and noting they need a hoof trim. During the procedure, the vet staff is very focused on anesthesia and the hooves. Meanwhile, (animal care) focuses on the animal as a whole, but also all the animals around us to make sure we and the animal under anesthesia are safe.”

Swenson agreed with the notion that hoof trims seem to be an art form of sorts.

“It is definitely an art,” she said. “Hoof trimming is difficult, because every hoof is slightly different. Every species bears their weight in a different way. You have to know what ‘normal’ is for that species before you try to recreate it.

“Usually with overgrown hooves, you aren’t going to be able to get them completely normal in one sitting, so it’s going to require multiple trims. You need to visualize in your mind what needs to happen in future trims.”

Fossil Rim guests may usually be preoccupied looking at horns or an animal’s markings, but just know our staff is monitoring them from head to hoof.