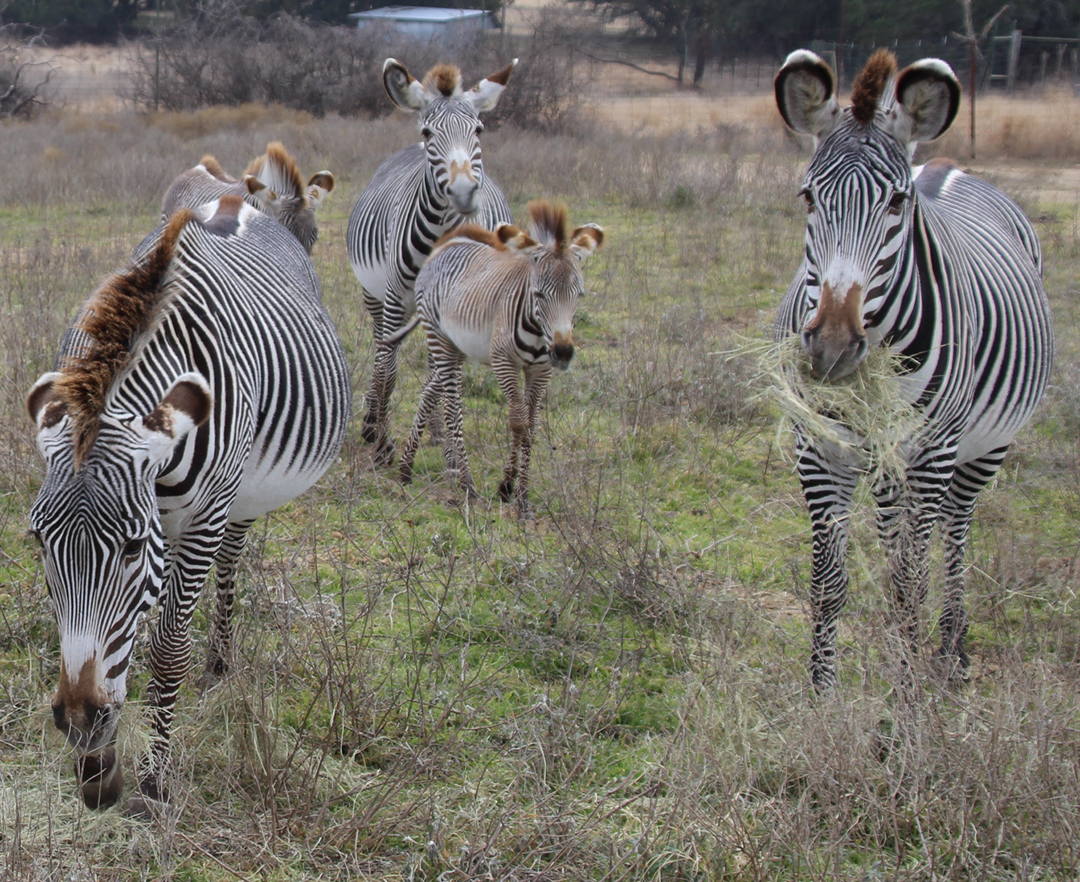 When visitors think of zebras at Fossil Rim Wildlife Center, they are going to envision Hartmann’s mountain zebras the overwhelming majority of the time.

After all, there are eight mountain zebras roaming the Game Preserve pasture daily for everyone to see. However, there are seven special zebras of a different sort that are rarely seen by anyone not on the animal care staff. They are endangered Grevy’s zebras, and they live in the appropriately named Grevy’s Pasture.

Becca McLachlan, animal care specialist – hoofstock, is one of the few people who see the Grevy’s regularly.

“We have four adult females and two male foals that were born in late 2017, which live in the Grevy’s Pasture,” she said. “We also have a stallion currently living in his own yard.”

McLachlan pointed out some differences in the two Fossil Rim zebra species.

“There are some easy ways to tell them apart,” she said. “Grevy’s are a little bit bigger, plus they have larger, round ears compared to the narrow ears of a Hartmann’s. Grevy’s have very narrow stripes, while toward the tail of a Hartmann’s they have especially broad stripes.”

From a behavior standpoint, there is not as much differentiation.

“Both species like to stay with their (respective) herds,” she said. “They both roll in the dirt, but Hartmann’s tend to be dirtier for whatever reason. Both are very food-motivated for pellets, coastal hay and grass.”

It is impressive to see how adept the animal care staff is at identifying specific animals without referencing an ear tag, but due to experience they find it to be easy.

“One way that we tell individuals apart – since they all have different stripes like human thumbprints – is to look at their chest markings,” McLachlan said. “It’s an easy spot to pick out right at the base of their neck. For example, we have a female with a single dot in the middle of her chest. Another female has what is almost a heart shape, so it is an easy identifier when you are first learning to tell individuals apart.”

McLachlan makes sure to check all hooves, which is an important consideration for all of Fossil Rim’s hoofstock species.

“We keep an eye on hooves daily, but since I’ve been here (2016) we have not needed to do a hoof trim on a Grevy’s zebra,” she said. “They walk around enough in this rocky pasture to wear down their hooves naturally, which is ideal.”

Like other Fossil Rim animals, the Grevy’s receive more feed when the weather turns cold.

“In the summertime, they are okay eating pellet feed and grass in this 30-acre pasture,” McLachlan said. “They each get two cups of pellets every morning; we usually don’t need to supplement their diet in the summer. In the wintertime, they also get a round bale of coastal hay, which they eat until it’s gone and then we bring them another one.”

There is usually another equid species nearby, which has to be considered to prevent conflict.

“Our female Grevy’s and foals share a fence line with a Przewalski’s horse stallion,” she said. “That’s fine, but if we move the Grevy’s stallion in with the herd, we have to move the Przewalski’s horse to another pasture. Even though they are different species, they will fight over the females.”

“That isn’t too much of an age difference, and they get along very well,” McLachlan said. “The smaller foal is a little more timid and shy. The older foal has been more outgoing from the start. He tried to push his mom off of food pellets, and has been very obvious about what he’s wanted.”

McLachlan knows how important these new additions are.

“Grevy’s zebras are classified as endangered, mostly due to habitat loss and poaching, so having any births is exciting,” she said. “We are very happy to have two foals born this past year. It makes a big difference for the species as a whole.”

Response on Fossil Rim social media consistently proves that Grevy’s zebras are very popular with guests, but their current isolated location is a case of what is best for the animals.

“Grevy’s zebras tend to be a more aggressive species in general, so having them (along the Gosdin Scenic Drive) is not ideal,” McLachlan said. “They do better in this pasture all to themselves. It’s quieter, there aren’t other animals bugging them and there’s limited human interaction. We don’t want any animals getting hurt if the Grevy’s stallion tries to defend his herd.”

Guests can visit the Grevy’s Pasture on an Adventure Tour; check out https://fossilrim.org/guided-and-group-tours/.

Be on the lookout for a video of McLachlan and the Grevy’s zebra herd that will post Jan. 31 as part of our celebration of International Zebra Day.