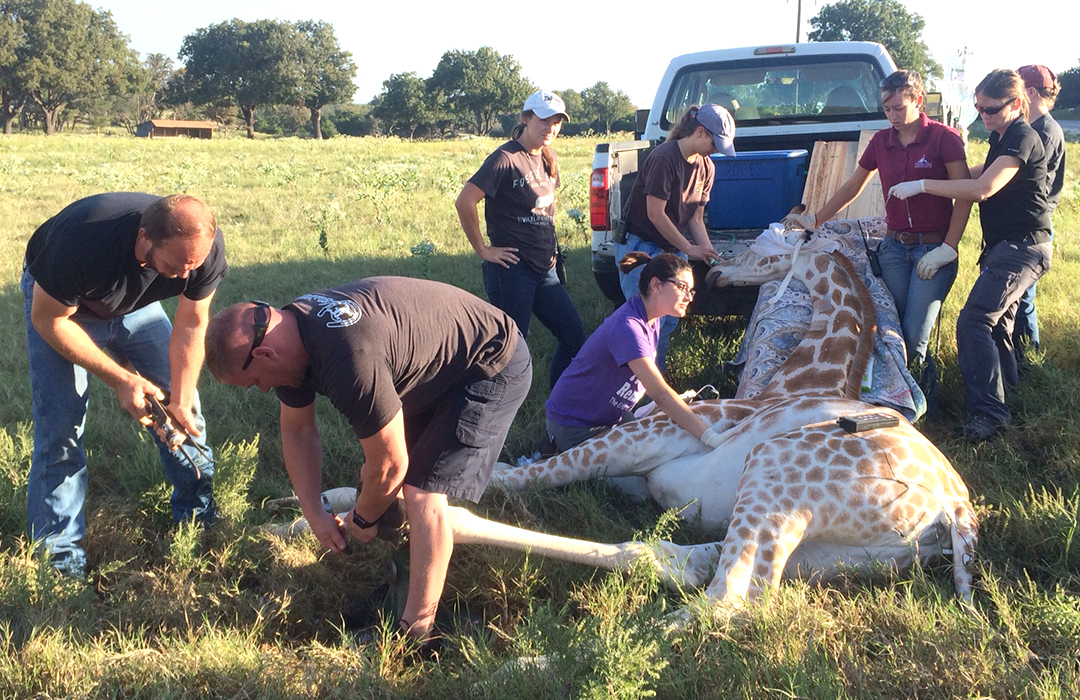 Megan Morrison learned a lot about conservation in the wild during her studies abroad in east Africa, but she wanted to gain a better understanding of how animals are managed at a wildlife facility.

To do so, the Wisconsin native traveled to Texas, where she was a hoofstock intern at Fossil Rim Wildlife Center from Sept. 4 to Dec. 22.
“I actually know some of the same people as (fellow Wisconsin native and giraffe caretaker) Molly (Shea), which is kind of crazy,” Morrison said. “I found out about this opportunity on an internship/job board. When I started looking at Fossil Rim, I thought it was a really cool place I was definitely going to apply for.

“After my experience in Africa, I was really interested to learn about captive management of species, sustainable herd health, and how (Hoofstock Curator) Adam (Eyres) and (Director of Animal Health Dr.) Holly (Haefele) work to manage their herds here. I was able to see the flipside of conservation in the wild at this facility, even as the animals breed in a natural environment here among the herds.”

“I’ve always loved animals,” she said. “My grandma, Barb Hotchkiss, took me to volunteer at Wildlife In Need Center in Wisconsin when I was little, and she also loves animals. My mom, Beth, is the same way. She came to visit me at Fossil Rim, and she loved it.”

During her time at DePauw University in Indiana, Morrison majored in biology with a focus in wildlife conservation and animal ecology. After graduating in 2015, she spent a year teaching English at the junior high level in Taiwan.

“It was challenging and interesting; I really love to travel,” she said.

Regarding her time at Fossil Rim, Morrison is pleased with the wealth of experience she gained.

“I got to work with a lot more different species than I was expecting, and it was very hands-on,” she said. “It was better than I expected – being involved in different procedures, watching the vet staff work – and they really let the interns experience just about anything they want here. The staff asked what I wanted to learn about, and then made sure I could be a part of those experiences.”

In regard to standout experiences from her internship, baby animals always played a role.

“The first baby bongo born during my time here – I’ve always loved bongo, so I was excited about that birth and being there for the neonate exam,” Morrison said. “Seeing the calf up close was awesome. Helping with the rhinos and bottle feeding (the white rhino calf) ‘Jiwe’ is another experience I have to mention. You get to be so close to them, which was so cool.

“I really loved being able to see the Grevy’s zebras, including the two foals born this year. I may never get to see Grevy’s again up close, so that was a great experience.”

“I really like ‘Neo’ the bongo bull; he’s super cute,” she said.

Shortly before her internship ended, Morrison made a project presentation to staff and volunteers.

“I worked on a project about some sable females with a focus on sustainable herd management,” she said. “Which females would be the best to keep in the herd for strong genetics, herd health, etc.? I wanted to develop a database where the individuals can be evaluated and scored. I looked at five female sable, and one scored significantly lower, so she might be a good candidate to be shipped elsewhere in the future.

“The others had their own positives and negatives. It was important to me to develop projects that could be used in the future – how could I help Fossil Rim? I hope that database is helpful. That was my main project, but I also did a smaller project about finding ways to assess animal temperament traits and being able to describe traits of individuals.”

Morrison said she spent time learning about rhinos from Justin Smith and Tim Lloyd, as well as giraffes from Shea, but her primary shadowing subject from the hoofstock staff was Becca McLachlan.

“Becca is great,” Morrison said. “She’s taught me so much and was really helpful when I had research project ideas. She would talk about things she noticed while working with past interns and give me some feedback on projects.

“Becca is really passionate about all the animals here and would tell me stories about different animals and species. I’m glad I got to work with her.”

After saying her goodbyes at Fossil Rim, Morrison will turn her focus to graduate school at the University of Wisconsin-Madison.

“I want to do wildlife conservation, so I’m going to be working with a guy in the wildlife and forestry department,” she said. “After I get my master’s, I want to work in human-wildlife conflict.”

After getting what she hoped out of her Fossil Rim term, Morrison thinks prospective interns would be wise to do the same.

“It’s an experience you probably aren’t going to get anywhere else, and if you love working with animals and being around people who also do, this is the place to do it,” she said. “Even being able to live at the intern house in the middle of the (Front) pasture and see wildebeests – that’s not an experience you get often. It’s a short internship, but very memorable. If you talk to the staff, they can help you achieve certain goals and learn about what you are interested in.”

For guests considering their first visit to Fossil Rim, Morrison notes it is a great alternative to the time and expense of a trip overseas.

“There are places you can go to see animals in their natural environment, but not a lot of people get to go over to Africa on safari,” she said. “Being able to come here and see these species up close, you’ll learn a lot about them and Fossil Rim as a conservation facility.”