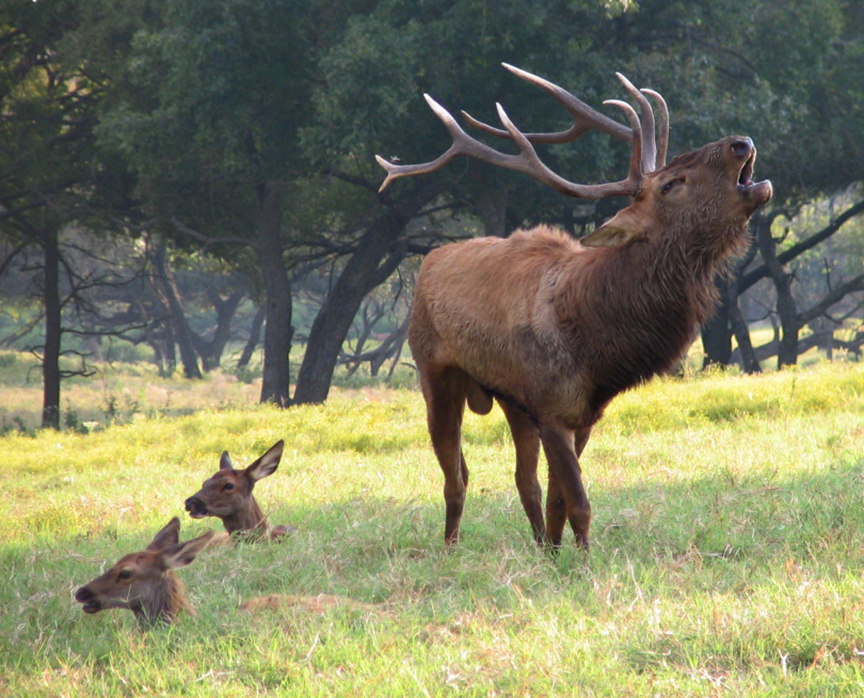 Fossil Rim Wildlife Center prides itself a conservation breeding center, so it is always pushing for a population increase, right?

Well, not exactly, according to Director of Animal Health Dr. Holly Haefele.

“It seems counterintuitive to think about the use of contraceptive techniques at zoological facilities like Fossil Rim, because one of our major goals is to breed more of the endangered species we have,” Haefele said. “Even though we have a lot of space at Fossil Rim, it’s not unlimited. We do talk about population control, especially for some of our bigger herds that we aren’t pursuing a conservation endpoint with. We may have 1,800 acres out here, but we also have about 1,100 animals, so we want to control some of our populations.”

Vasectomy is the primary way contraception is employed at Fossil Rim.

“As many people know, that’s when you take a small section from the vas deferens out of a male to prevent sperm transfer,” she said. “We use this method in two of our cervid herds to control population. A number of years ago, we decided we didn’t want to add (European) red deer to our herd, so we vasectomized all 35 males over a period of two years. It was very successful.

“After we’d vasectomized half of those males, we had no more births because we started by picking the most dominant males. Even though they were vasectomized, their hormones were intact so they were still able to do all the normal things except for breeding. They maintained their territories and the attention of the females.”

Similarly, fallow deer are not one of Fossil Rim’s managed conservation programs.

“We employ the same technique for fallow deer,” Haefele said. “We want to decrease the number of animals in that herd. We went out to get the biggest males and vasectomize them. So, you might not want to breed a particular animal, but you still want him on exhibit to maintain a normal herd group or social situation.”

Vasectomy is utilized in a different manner for several antelope species.

“We saw the need to improve management in our antelope herds like sable, gemsbok, waterbuck and addax,” Haefele said. “We really wanted to achieve a particular calving interval for a number of reasons, such as having lactating females when there was quality grass, having a calf crop that was weaned prior to the winter and preventing babies from being born in the winter under non-ideal conditions. You achieve this by putting a breeding male in the herd for 2-3 months in the summer, and then with a nine-month gestation period you get babies in the spring.”

But if that male is removed for the rest of the year with no replacement, the “normal” herd structure is lost.

“The breeding male keeps the herd together, plus he has some influence on youngsters in the herd,” she said. “Young males might start breeding if there isn’t a dominant male in the group to push them away.”

Fossil Rim has a remedy that both controls the breeding window and maintains the desired herd structure.

“We vasectomize a bull of that species, and when we take the breeding male out, we put the vasectomized male with the herd,” Haefele said. “Unlike castration, a vasectomy allows the male to maintain normal testosterone levels and male behaviors. He stays with the herd the other 9-10 months.

“We’ve been doing that for eight years and it works well. We will use an antelope breeding male for about three years and then switch him out for the sake of genetic diversity.”

Sometimes, Fossil Rim will turn to contraception as a preventive health measure for individual animals.

“We had a giraffe ‘Jurz’ born a number of years ago, and she was tiny,” Haefele said. “She was born to a small female, which we think might have been why Jurz was slow to develop. We had a huge bull at the time, and we anticipated Jurz becoming sexually mature at about age three.

“We were worried she would have trouble giving birth to the calf – a dystocia situation. We were also concerned she could be injured when the bull mounted her due to their size difference.”

The decision was made to utilize contraception, but Jurz required both pregnancy prevention and having her hormones inhibited so she would not enter estrous, and thus the bull would no longer be interested in her.

“We ended up using a gonadotropin-releasing hormone agonist drug called Deslorelin,” Haefele said. “We injected the drug under her skin just like the microchip for pet dogs and cats. It downregulates the pituitary release of reproductive hormones. We used that method for several years.

“When she was eventually large enough to breed and we had a smaller bull, we stopped using the implants so that she could get pregnant. We were all very happy to see this past January that she had her first calf and it is now doing great.”

Haefele shared another example of a female animal with health concerns.

“We had a dama gazelle that we discovered was pregnant and had a healed pelvic fracture,” she said. “We knew she would have trouble giving birth to the baby. She did indeed, and we ended up performing a C-section to get the baby out. We did not want her to get pregnant again, so we used a contraceptive drug called PZP vaccine.

“It’s a cool technology that was developed to control feral horse populations. It fills the receptors on an egg that sperm would normally attach to. You can deliver that via dart gun in the pasture.”

When it comes to methods of reversible contraception, like the aforementioned examples, it is a more feasible option for female animals.

“Reversing a vasectomy is a difficult procedure, and in zoological cases I’m aware of, a surgeon who normally operates on humans is brought in to do it,” Haefele said. “A lot of primates can be given monthly birth control like a human would take. Drugs can temporarily be given in food for hoofstock.”

There are many different reasons why, and the concept may seem strange at first glance, but sometimes contraception is the right answer for managing animals at a breeding center. Veterinarians assess the situation for each animal and population, and then act accordingly to achieve the best outcome for both.