Cheetah cubs get checkup before transfer 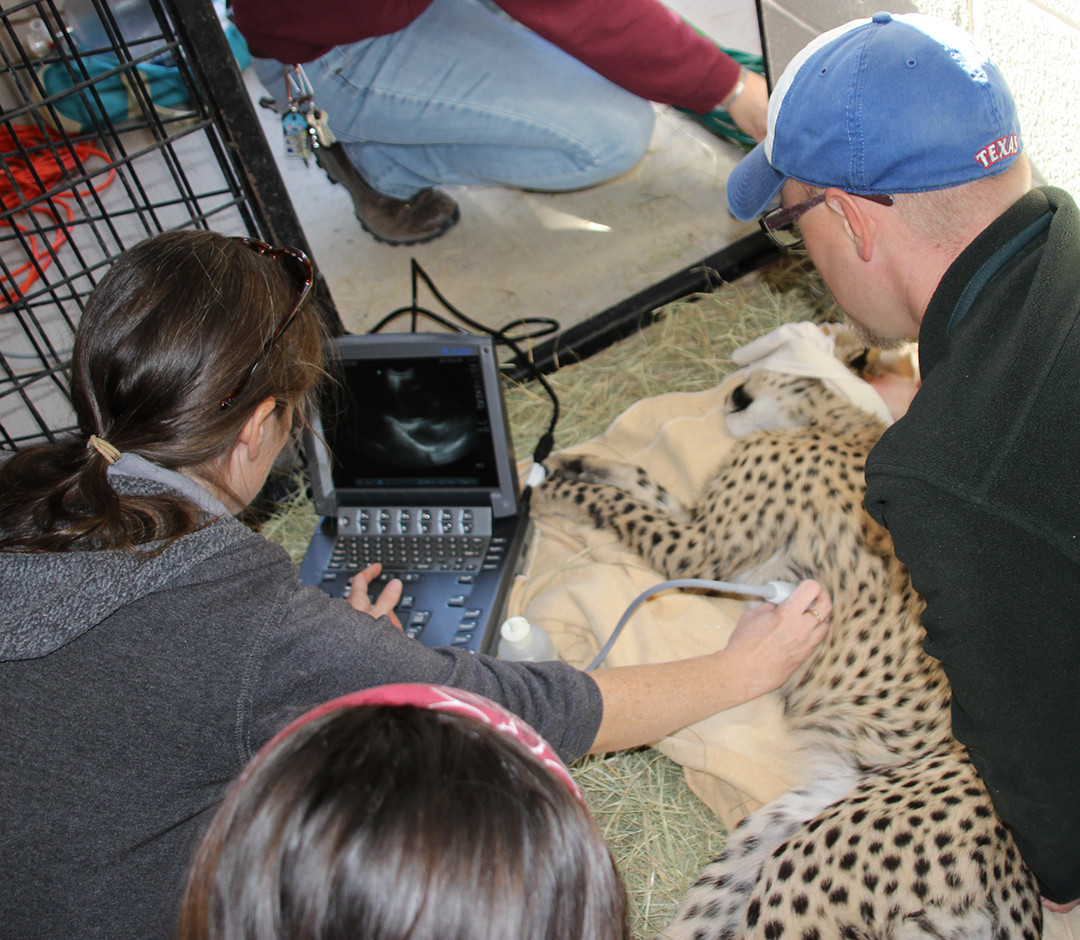 The patients were six-month-old cheetah cubs “Cersei” and “Sansa.”

“We got to do something pretty fun – an exam on two healthy cheetahs,” Haefele said. “These cubs are hand-reared and will be going to the Caldwell Zoo in Tyler soon, but first we wanted to give them a thorough checkup.”

One of the aspects that made the exam unusual is where it happened – at the Robert B. Haas Family Cheetah Conservancy aka “Cheetah Hill” instead of at the veterinary clinic.

“As opposed to a standard adult cheetah exam, we didn’t do these in the vet clinic,” Haefele said. “It is an easier process at the clinic for several reasons, but we talked about it and decided that doing the exams in their enclosure on both of them at once would be the least stressful route for them. Otherwise, we’d probably crate them and take them to the clinic; if we only did one at a time, they would’ve been pretty nervous.

“Instead, they went to sleep and woke up at the same time, so they didn’t miss each other. When they are separated, they are pretty upset.”

“It is unusual we would do two exams at the same time,” Haefele said. “Injectable anesthesia doesn’t last forever, so I wanted to get these exams done as soon as possible because we had about 30-45 minutes before they started waking up. I think we ended up at 35 minutes, which was good.”

The method in which anesthesia was administered would not be an option for many of Fossil Rim’s animals.

“We know we can handle them, so we decided to utilize hand injection,” she said. “If they were six months old, but not hand-raised, we would have probably netted them and then done the injection. Most animals out here require that we dart them or use a pole syringe, but these cubs are used to our animal care staff.”

Carnivore Curator Jason Ahistus and Cheetah Specialist Alex Sharkey each secured a cub for a vet to hand inject.

“Even though they are hand-reared, they can be troublemakers – especially Sansa,” Haefele said. “I cannot get a blood sample from 27 pounds of angry cheetah without having the animal sedated. We used our normal anesthesia protocol, which worked nicely.”

Before the injections, Haefele asked Sharkey when the cubs had their most recent food and water.

“Anytime we do anesthesia, it’s preferable for patients to have fasted in the previous 12-24 hours,” she said. “It’s just a safety precaution; we don’t want them to vomit while under anesthesia. Restriction of water is variable based on their environment and situation.”

“We did a very thorough physical examination,” she said. “We used an ophthalmoscope to look at the eyes, we did an abdominal palpation to feel the kidneys and intestines, we did radiographs and ultrasound to check the heart and abdomen, plus we used the ultrasound to collect urine samples via syringe.”

The age of the cubs was another atypical aspect of the exam. In fact, the vets had never done an anesthetic examination on cheetahs approximately this age.

“Cubs are usually with their mothers for 18-24 months before they would be considered to go to another facility and thus need a pre-shipment exam,” Haefele said. “The hearts of these cheetahs are still small enough that we could see them entirely at once with ultrasound, as opposed to viewing them in sections. Cersei and Sansa both look really healthy, so it’s always enjoyable to see an exam go well for cubs.”

While it is more likely that male cubs will stay together for the long haul, it looks like these two females may remain with each other for the foreseeable future.

“Sansa and Cersei aren’t actually sisters,” Haefele said. “Sansa was born at Fossil Rim with her brother, while Cersei was born with her brother at another facility. They were close enough in age that we decided to bring all four cubs together, and then pull the two males to go to another facility and keep the two females together. They think they are sisters and are tightly bound, so it will be nice for them to go on exhibit together at the Caldwell Zoo and play nonstop.”

Dec. 4 is notable for these cubs and their entire species, considering it marks International Cheetah Day.

“International Cheetah Day is a big deal for a number of reasons,” Haefele said. “We have 33 cheetahs currently, and they are one of our more prominent species, as well as an important conservation effort. This is a time to bring awareness to the species. Currently, the estimated population is 7,100 in Africa, which is down considerably over the last 30 years.

“The population is shrinking for several reasons, including loss of habitat. Whatever we can do at Fossil Rim to get people thinking about conservation of endangered and threatened species while teaching them about cheetahs, it is definitely worthwhile.”