Everything checks out for red wolf male 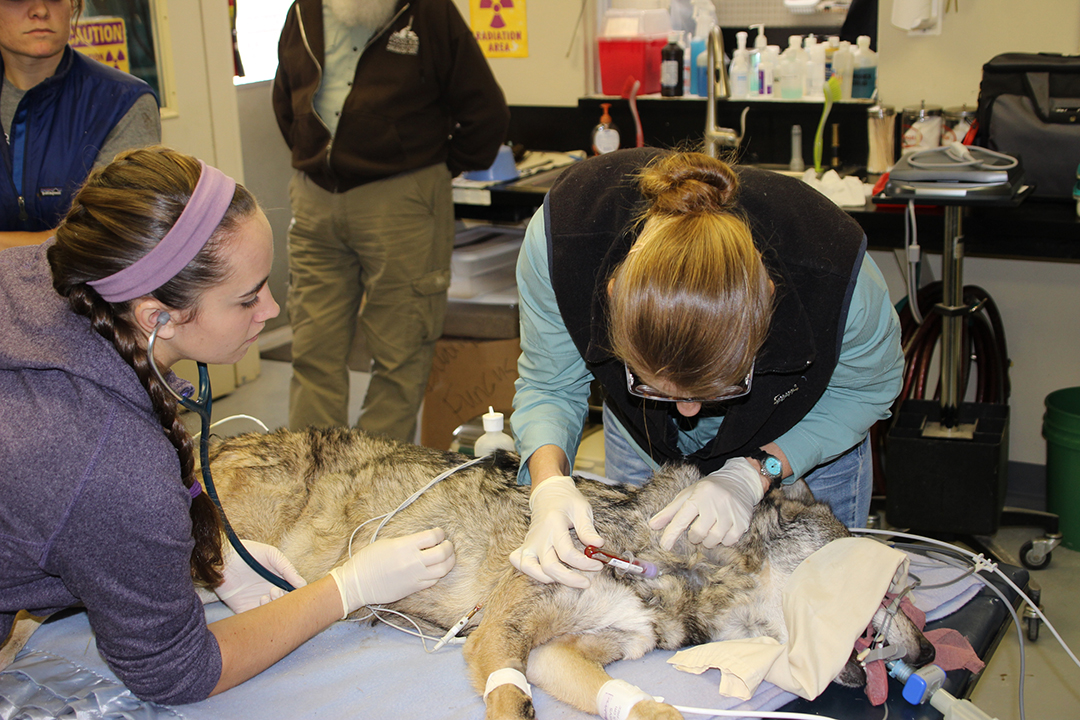 When an animal is preparing to leave Fossil Rim Wildlife Center, protocol usually dictates a health exam is conducted.

Sometimes, even when the animal is not going anywhere the exam is still essential. This was the case for “Pip” the red wolf on Nov. 1.

“We participate in a lot of Species Survival Plans (SSPs) through the AZA,” said Dr. Holly Haefele, director of animal health. “So, we often trade animals with other institutions to improve the breeding success of those populations. For example, oftentimes we are doing an exam like this for Pip the red wolf because an animal is going to another institution. This was just Pip’s annual exam before he goes into a breeding situation; he’s not leaving Fossil Rim.

“We will be doing an identical exam on a maned wolf that will be going to another facility. It’s part of our preventative medicine programs where we try to do an exam every 1-2 years, depending on the carnivore.”

“We do a dental exam and cleaning, plus radiographs of the whole animal,” she said. “Pip is 10 years old; and we did see some boney changes that would be consistent with arthritis. We took blood samples to help us assess how well his organs are working – is he making enough red blood cells, is he responding to some sort of infection or inflammation, etc. It gives us a snapshot on him, and we can compare to his previous exams.”

As it turns out, when blood and other samples are taken from Pip, or any red wolf, there is great interest well beyond Fossil Rim.

“Red wolves are special as a critically endangered North American species, and currently part of a program run by the U.S. Fish and Wildlife Service,” she said. “That’s the case for our Mexican gray wolves and Attwater’s prairie chickens – also in crucial programs for North American endangered species. Often, there are many people doing research on these species at the same time – universities or other research institutions – so we get requests. We have a system to track who is asking for what.

“With red wolves, we are not only banking genetic samples and serum samples for the SSP and Fossil Rim, but also currently taking fecal samples, serum samples and lab tests for a research project on inflammatory bowel disease. We see similar high demand for rhino samples.”

Even as work is getting done at Fossil Rim – in the animal health or animal care departments – there is often invaluable learning underway, as well. On this day, the beneficiary was Veterinary Preceptee Samantha King.

“We try to get our fourth-year vet students to start thinking like veterinarians,” Haefele said. “So, they think through everything – what drugs we’ll use on this animal, what have we used before, look at his old records with an eye out for any red flags in past exams, read related literature, and do a walk-through of the procedure to determine needed supplies – what if there is an emergency when we are away from the clinic?

“Then, we walk through the process during the actual exam to make sure they understand every step. So, it always benefits our students to get hands-on. Do radiographs, use ultrasound, and in this case Samantha was assisting Pip with his breathing under anesthesia.”

Haefele was pleased to report positive exam results for Pip, especially considering he is roughly equivalent to a 70-year-old human.

“Pip looks really good,” she said. “He was born here in 2007, but lived at the Fort Worth Zoo for a while. He came back to us a little chubby in 2016, but our carnivore team has done a nice job of getting him into a desired weight range. Just like people, having excess weight as an older animal can predispose them to a variety of problems.”

Positive test results earlier in 2017 drew attention to Pip as a breeding candidate.

“Another institution came here in February 2017, and we immobilized Pip to do an electroejaculation to collect semen,” Haefele said. “He has never bred, but we now feel confident it was a matter of the female he was previously paired with. Those samples have been frozen, so even after Pip dies he could potentially father a litter. I was encouraged to learn 20-year-old black-footed ferret semen was used to facilitate a pregnancy and then a litter, and that was an animal which had never bred in captivity.”

With 2018 approaching, it is an exciting time for Carnivore Curator Jason Ahistus and Carnivore Specialist Tessa Townsend as it relates to Fossil Rim’s red wolf program.

“Pip was living with his sister ‘Amber,’ who was also born here in 2007 amongst a litter of seven pups,” Haefele said. “She can’t breed, but Pip can so we brought in a male and a female from another facility. The incoming male now lives with Amber, while the younger incoming female will hopefully breed with Pip. They met in adjacent enclosures, and since everything looked good, they were placed together.”

Townsend will be tasked with carefully observing the pair during breeding season, and she looks forward to reporting a potential pregnancy so the carnivore department can begin pup preparations. 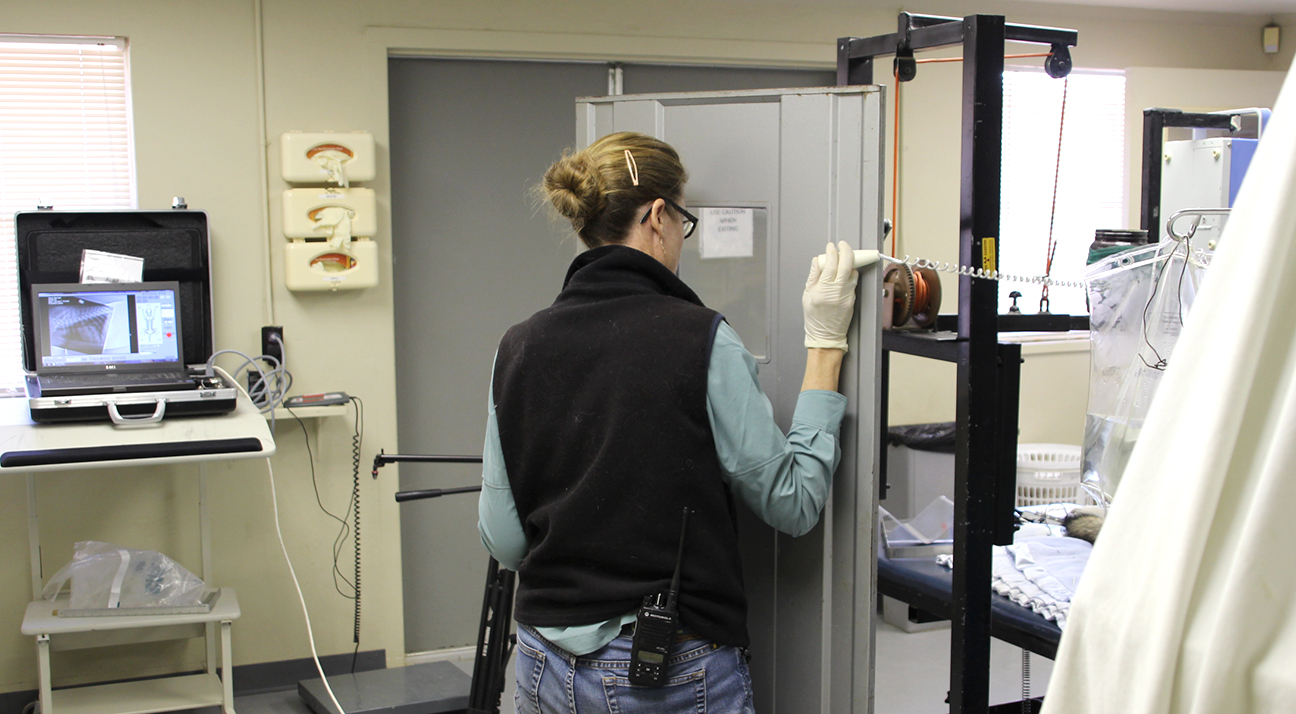 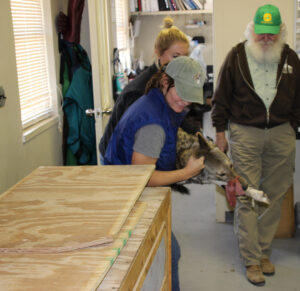 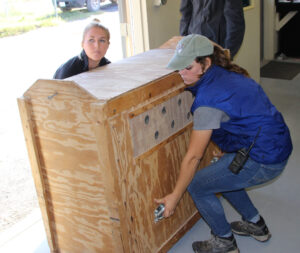