Fall In Love With Autumn At Fossil Rim 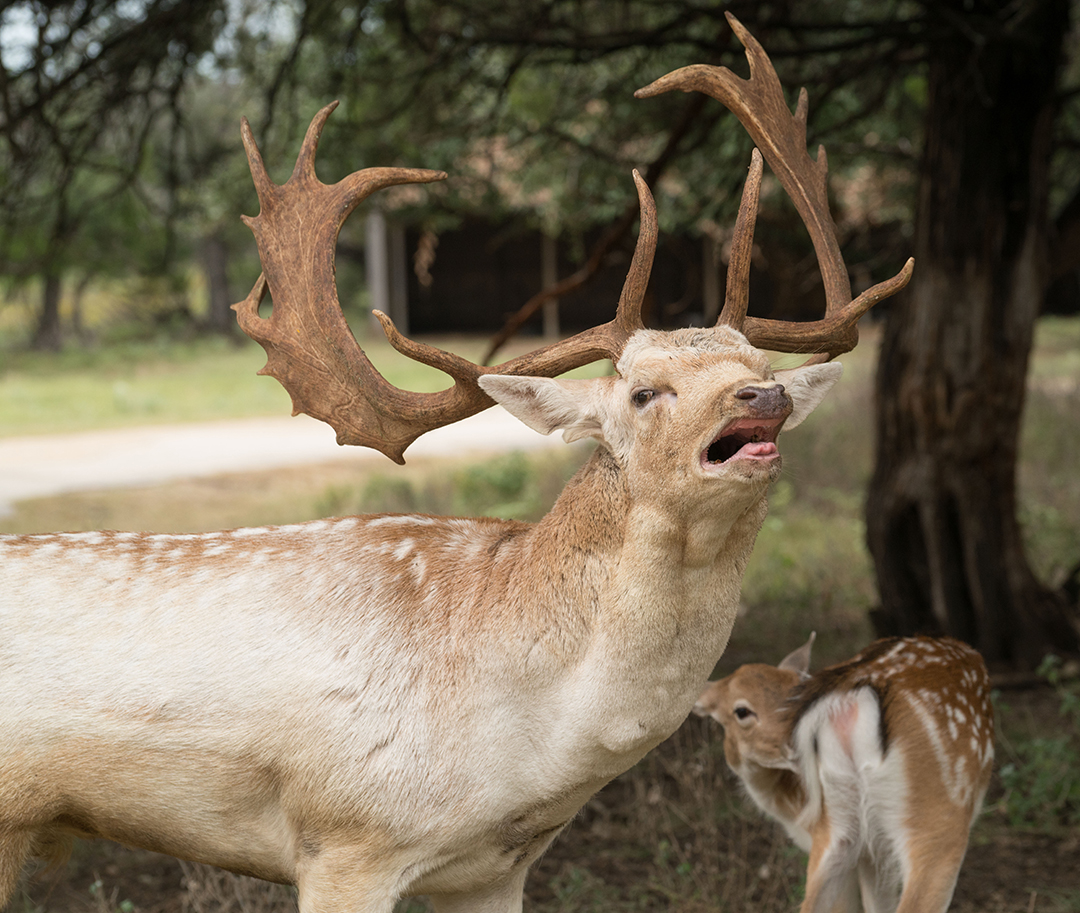 One of the best times of year to visit Fossil Rim is during the fall. As the weather cools, the animals tend to be more active and visitors can get a better look at the amazing species that live at Fossil Rim. After our busy spring and summer, the fall is a great time to tour the park at your own pace and avoid the crowds.

This is also the time to see many birds migrating south, including cedar waxwings, hawks, hummingbirds, and white pelicans. In November, the trees will be changing into the beautiful fall colors.

Additionally, three of our four deer species are in rut (breeding season) and you can see some remarkable displays as the males clash antlers and vocalize in their competition for dominance and the right to breed. Most of the red deer, fallow deer, and white-tailed deer have rubbed off their velvet (hairy skin layer that protects the antler during its growth) and are now in hard antler.

During most of the year, male fallow deer will live in bachelor herds while females and fawns will group together. This same social structure is also seen in the red deer and white-tailed deer. However, during the fall rut, males will compete for breeding rights and will assemble harems (groups of females).

This is particularly true in the red deer, where you can see a large group of females with one male. Fallow deer may form harems or several males may join a group of females. The larger, more dominant males will also establish and defend a territory, the most dominant securing the prime locations to woo the females.

Male deer attract females in a few ways which vary a bit based on species. When males are scratching off their velvet or while in hard antler, they often will rub their antlers on trees or the ground in a display of dominance and fitness.

Males will also challenge each other and clash antlers as they compete for females and/or territory. In some species (such as the red deer), males will roll in the mud and urinate on themselves, creating a “perfume” by which to attract females.

Vocalizations, ranging from bugling to roaring depending on the species, are also a form of impressing females and intimidating other males. Vocalizing serves several purposes; it is a way for males to show that they are physically fit and ready to mate, they are defending their territory or harem, or they are ready to fight with other males over available females.

The vocalization of a fallow deer sounds like roaring while a red deer’s call is closer to the bulging of an elk. These loud sounds can be heard over large distances – just ask Fossil Rim’s neighbors!

The gestation (pregnancy) period for white-tailed, fallow, and red deer ranges from 6.5-8 months based on the species. Females rear the fawns, and female offspring can breed when they are 1.5-2.5 years old. Males reach sexual maturity between age 1-2; however, it could be several years before those males can truly compete with the more mature, established males.

So come on out to Fossil Rim, enjoy the beautiful fall weather, and take the opportunity to see our animals celebrating the end of another hot Texas summer.

2 thoughts on “Fall In Love With Autumn At Fossil Rim”