True American carnivore worth fighting for 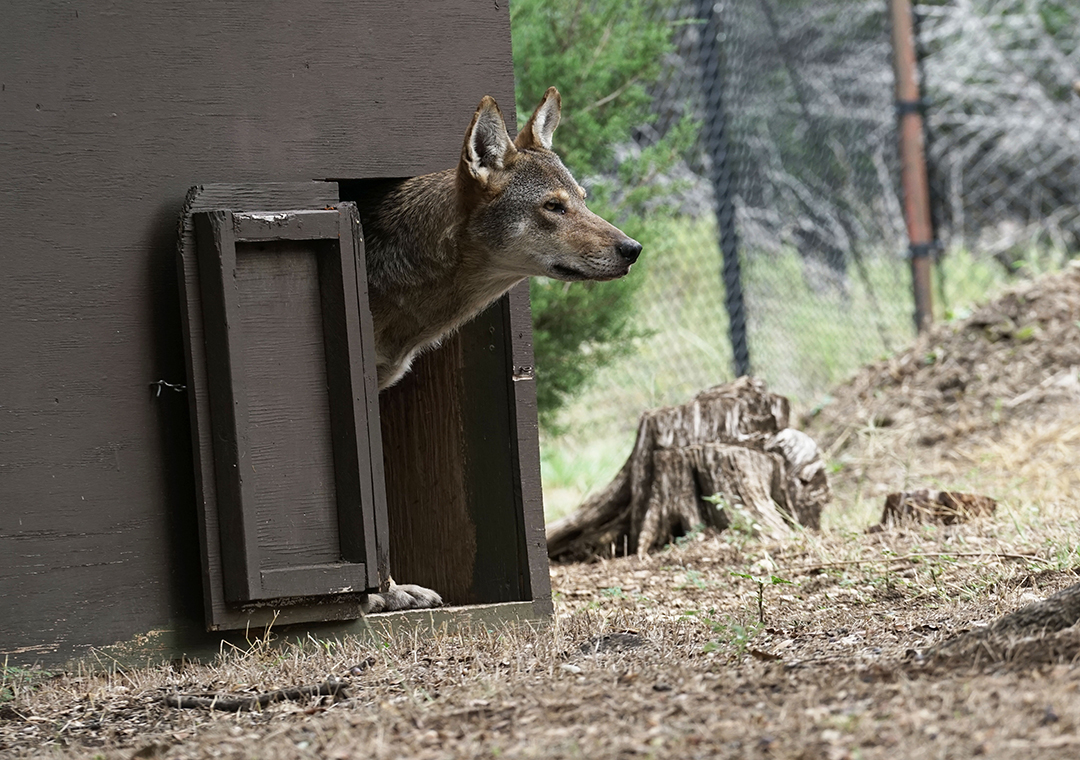 With the arrival of National Wolf Awareness Week Oct. 15-21, Fossil Rim Wildlife Center – in conjunction with Conservation Centers for Species Survival and Endangered Wolf Center (Missouri) – wanted to address the plight of an essential American canid.

“A red wolf is a distinct species,” said Jason Ahistus, Fossil Rim Carnivore Curator. “It is smaller than a gray wolf, but larger than a coyote. Red wolves generally weigh 50-60 pounds, reaching 80 pounds. That’s pretty small for a wolf species.”

Ahistus pointed out that it is one of the world’s most critically endangered canids.

“Originally, their native habitat was throughout the southeastern United States, as far west as Texas,” Ahistus said. “They were eradicated in the ‘50s and ‘60s. Now, the population has been reintroduced to the wild in a refuge in North Carolina. There are only about 40 left in the wild, and obviously we hope to increase that wild component.

“Fossil Rim is one of 43 institutions that houses red wolves in captivity, totaling about 230 animals. The release program started in 1987 with eight wolves, after the red wolf had been extinct in the wild for close to a decade. The U.S. Fish and Wildlife Service rereleased 63 wolves into the wild from 1987-94, and the population grew to more than 100 by 2012.”

The red wolf is the lone carnivore species that is found only in the United States.

“They are a very important species here as the only carnivore species solely indigenous to the United States,” Ahistus said. “They are truly American, so this is a homegrown conservation effort.”

Unlike the omnivorous maned wolves at Fossil Rim that can be very finicky eaters, red wolves are not picky when it is time to eat.

“In the wild, they are really opportunistic feeders – deer, raccoons, nutrias, rabbits, and just about anything they can catch,” Ahistus said. “In captivity, their diets can vary drastically between institutions. Some feed red wolves a complete kibble diet, while some feed them only meat. We feed a variety of meat and kibble, plus some prey items.”

It is not uncommon for red wolves to remain out of view as Fossil Rim guests pass on a Behind-the-Scenes Tour. It is in their nature to do so.

“They are pretty difficult to get eyes on here at Fossil Rim,” Ahistus said. “They rarely stop moving unless they are in their dens. For the most part when in captivity, they are very shy, skittish animals. Nine times out of 10, they will turn and run in the other direction.”

Certainly guests want to see them, but it is actually good for the wolves to remain uneasy about people.

“A lot of species are very high-stress animals, wolves in particular,” he said. “They do well with limited (human) interactions. They have a natural fear of humans. Regarding a species you are working with for reintroduction, you want it to have that natural, wild behavior.

“For example, we don’t talk to our wolves when working around them, because it can create a familiarity with humans. We try not to spend too much time around them unless we have to.”

While cheetahs are a high-maintenance species for Ahistus and his team, red wolves do not fit that mold.

“Overall, they are a pretty easy species to manage, so we are very hands-off,” he said. “They are very hearty animals that can do well in every situation.”

Fossil Rim’s current red wolves are siblings born at the facility in 2007 that live together for companionship. There have been 31 red wolf pups born at Fossil Rim.

“They are a pack species, so social dynamics play a big role in their behavior,” Ahistus said. “They want companionship with another wolf, so a wild red wolf pack consists of 5-8 animals: a breeding pair and their offspring from the past 1-2 years. The offspring help the parents care for the following year’s pups by learning what to do.”

Townsend is ready for a lot of secluded observation in the months to come.

“Last year, the carnivore intern and I spent a lot of time observing the Mexican gray wolves for breeding and whelping behaviors,” she said. “I am looking forward to doing the same for our new breeding pair of red wolves. They do have similar birthing times – April to May – so it will be interesting to watch for similarities and differences between the two species along the way.”

Townsend, who mainly works with wolves so Ahistus can focus primarily on cheetahs, is understandably enthused about the new additions.

“I’m super excited to get the two red wolves from Endangered Wolf Center!” she said. “Considering the current plight of the red wolf, it is really important that all of the facilities able to bring more red wolves into the world do so. I’m confident we can keep that number of 31 pups rolling up and I’m happy to play a part in keeping this wonderful animal in our world.”

“Every year, the SSP decides which animals will breed and be moved to other facilities,” Ahistus said. “Fossil Rim has always cooperated with the SSP since we became involved with red wolves in 1989.”

The first step is for Fossil Rim to be prepared for the new arrivals.

“There are a lot of logistics that go into any animal move,” Ahistus said. “For every animal, the sending facility will do a physical exam, bloodwork, etc. There is paperwork to do, and if everything checks out, we will go forward with the move.

“For wolves, you want to do the move at a certain time of year – don’t interfere with breeding season. Most moves occur in the fall, since cooler temperatures mean less stress on the animal.”

The next stage is the day of arrival.

“Usually, when we get a new animal in, we go through a short quarantine period,” Ahistus said. “Then, the intro process for red wolves is pretty simple. First, we put them in adjacent yards where they have visual and olfactory senses to assess the other animal.

“It’s called a ‘howdy,’ which they’ll do on the fence line for several days. After that, if we like the behavior we’re seeing, we’ll open the doors up and put them together.”

Fossil Rim’s red wolves live in an area known as “Wolf Circle” within the Jim Jackson Intensive Management Area.  The five-enclosure area was built specifically for red wolves in 1989. While it has also been home to maned wolves and Mexican gray wolves, it is transitioning back to a majority-red wolf area.

Ahistus has strong feelings about the importance of the red wolf recovery efforts.

“Red wolves play an important role in the ecosystem,” he said. “It’s a keystone species – the ecosystem collapses without it. The red wolf is an apex predator that controls the prey base. Without the red wolf, the white-tailed deer population goes wild, while other carnivore populations can get out of control – such as the coyote.

“Plant communities are also affected by the loss of a keystone species. Our efforts are crucial, because the environment will forever be changed without the red wolf. It’s a goal as part of the SSP to be able to release a large group of red wolves back into the wild.”

The American bison was declared the national mammal in 2016. Ahistus was asked if he thought the red wolf was a viable candidate for such an honor.

“Honestly, that’s our ultimate goal – to have the red wolf be the face of the animals in the United States,” he said. “To have a carnivore be the icon – and not an aggressive carnivore – just a carnivore that plays its role in an ecosystem.”

With only about 270 red wolves in existence, obviously the species faces an uphill climb. But the determination of Ahistus and likeminded people in his position can make an impact.

“I think when people say they don’t want the red wolf around, it’s about a lack of education on the species,” he said. “It’s our job to educate the public about what’s happening with the species and what role they play. ‘The big, bad wolf’ is in our pop culture – stories and cartoons; the wolf is always the bad guy.

“In reality, humans are the bad guy, and we have destroyed their habitat and the red wolf population in the wild. Now, we are in a battle to save them. Red wolves are quiet, secluded and serve a purpose in our environment, so we need to get the truth about them out there.”

Townsend concurs on the misconceptions about red wolves.

“The big, bad wolf narrative is really hard to hear, especially after working with these animals,” she said. “They have extremely shy and timid personalities and tend to stay as far away from humans as they can. I think better education on the subject is crucial for further support of their species. More people need to learn about the significant positive impact the American red wolf has on its habitat.”

Learn more about the red wolf at https://fossilrim.org/animals/red-wolf/.