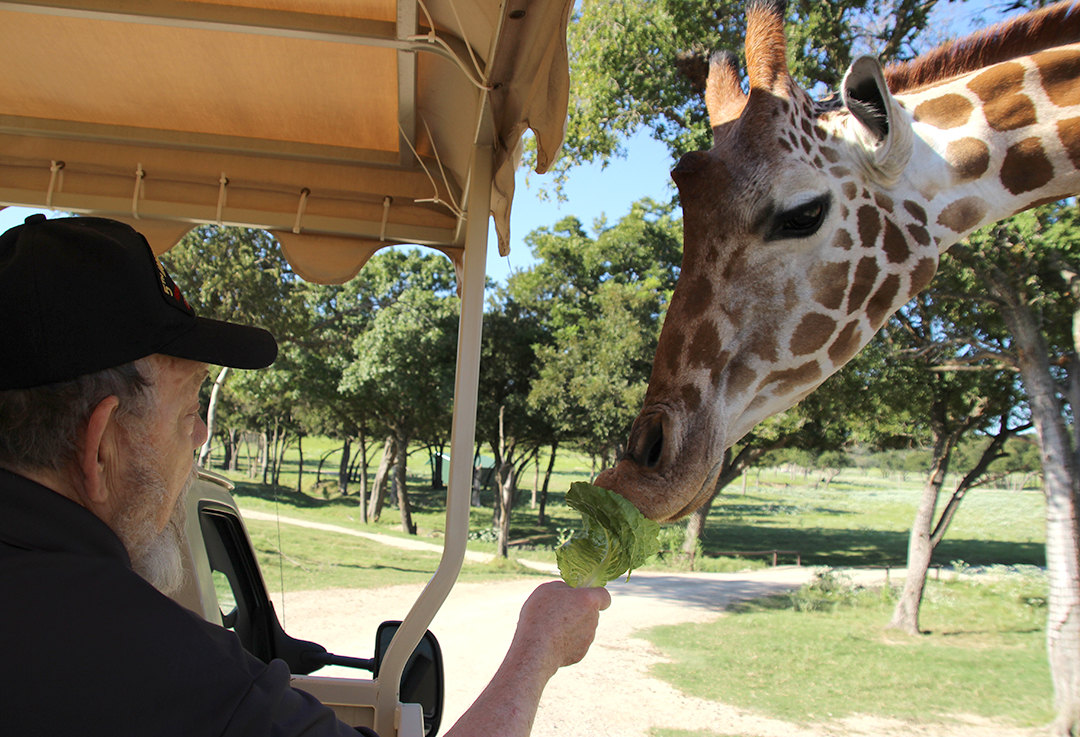 The man who named “Stretch” – the giraffe born at Fossil Rim Wildlife Center on July 28 – capitalized on the opportunity to meet the reticulated youngster a few weeks later.

Bob Hershey arrived at Fossil Rim for the first time ever on Sept. 7 with his wife, Karen, and their service dog “Lulu.” Karen explained how the giraffe calf got its name and how the couple from Ennis, Texas ended up taking a special tour.

“We were watching Fox 4 News (DFW) and the reporter said there was a new baby giraffe at Fossil Rim that needed a name,” she said. “The reporter suggested naming it ‘David,’ and I told Bob about the baby while he was cooking in our kitchen.”

His inspiration for the giraffe’s nomenclature came swiftly.

“Bob looked at me and said, ‘Why not name him “Stretch”?’” Karen noted. “I almost fell out of my chair laughing; I thought it was so cute. I asked Bob if he’d mind if I called Fossil Rim and suggested the name. He said ‘Sure, go ahead.’”

Making the call after business hours, Karen left a voicemail. A couple of days later, she got a call from Fossil Rim Marketing Director Warren Lewis.

“He said they’d decided to use the name and that we were invited to come out here,” she said.

Bob recalled how hard Karen laughed when he just threw Stretch out there on a whim.

“When we got the call that Stretch had been chosen, I was flabbergasted,” he said.

Both natives of Oklahoma, the couple actually met 36 years ago on the Oregon coast. They moved to Texas after some enjoyable visits in their RV.

In between Oklahoma and Oregon, Bob – now a disabled war veteran – spent a memorable stretch in Vietnam from 1966-68 as a member of the U.S. Army.

“I was in the infantry, and they sent us out in the field for three weeks to practice before heading over there,” he said. “I was chosen for KP (Kitchen Police), and so I volunteered for permanent KP out in the field. Two weeks later, they promoted me to cook.”

As Karen pointed out, chief cook was not exactly the safe-and-sound position Bob envisioned.

“He thought he had it made as a cook, but all the soldiers were promised one hot meal per day,” she said. “Guess who had to deliver to the front lines?”

Bob admitted it was “scary” taking meals to the soldiers daily as they were guarding Thunder Road, but he is proud of his service.

As for the Fossil Rim visit, the emotion of the day was happiness, as the Hersheys arrived laughing and telling jokes.

“We had a great trip here and stayed in a very nice local hotel, plus the weather is really nice,” Karen said. “We can’t believe how green it is (at Fossil Rim).”

They had no previous close encounters with giraffes.

“We were feeling pretty sad about the (recent) loss of one of Dallas Zoo’s young giraffes; we care about them,” Karen said.

When their tour van, driven by Tours Manager David Whiting, arrived in the Game Preserve pasture from the Overlook, Stretch and the other giraffes were instantly seen near the giraffe barn. Whiting drove the van up close beside Stretch so the visitors could get a great look at him. They fed lettuce leaves to several adult giraffes, as well, and learned a bevy of giraffe factoids before Whiting expanded the tour to the rest of the pasture and then the Robert B. Haas Family Cheetah Conservancy.

“I’ve never had a giraffe eat out of my hand, that’s for sure,” Bob said.

Karen suspected they would both love Fossil Rim before they arrived, and she confirmed that notion when the tour concluded.

In his best Arnold Schwarzenegger voice from the movie “The Terminator,” Bob deadpanned “We’ll be back.”