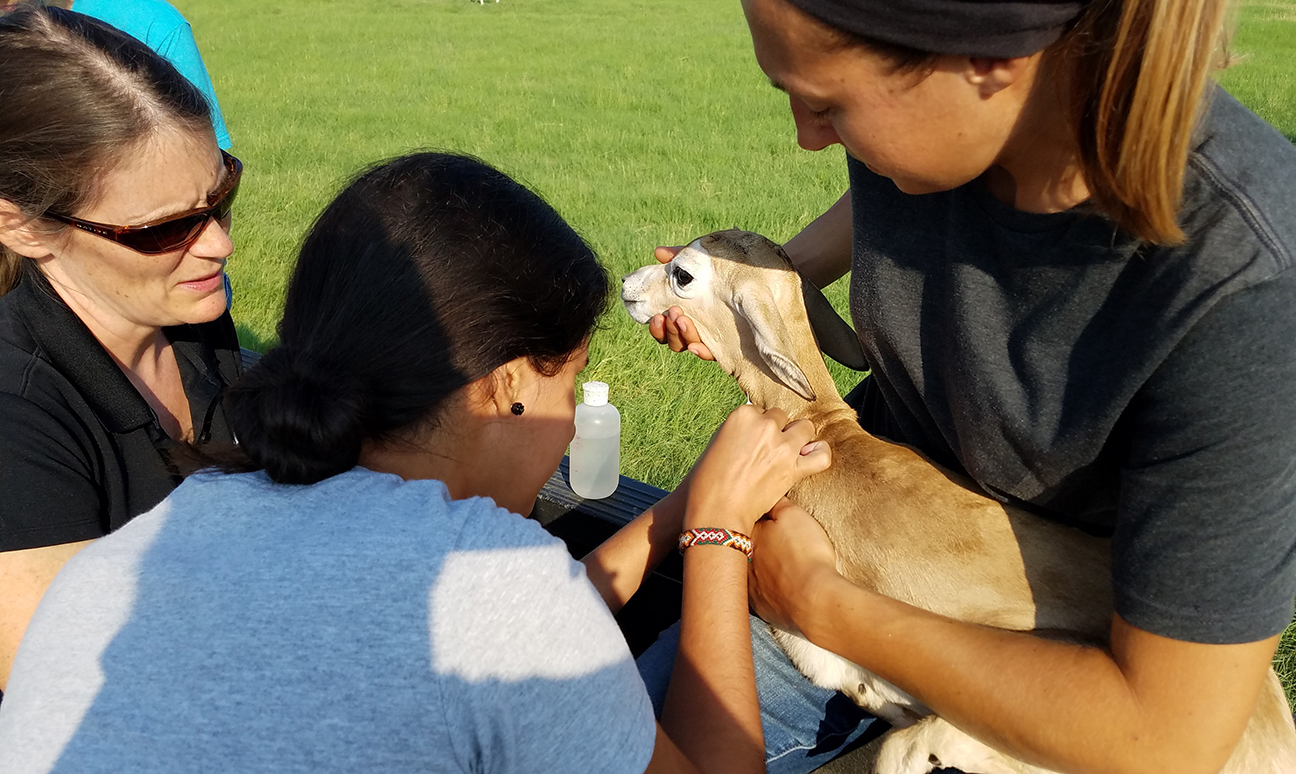 Paula Rocha had lived in America once before in the name of education, and after reading up on Fossil Rim Wildlife Center, the Brazil native decided it was time for a second extended stay.

The veterinary preceptee lived and learned at Fossil Rim from July 10 to Sept. 1.

“I was looking for a preceptorship with wildlife in zoos and safari settings on the American Association of Zoo Veterinarians website,” Rocha said. “I saw Fossil Rim and researched it. I actually read some stuff other interns had said about their hands-on experience here, and I became very interested.

“I wanted to be part of something – not just watch. This is not my (native) country, so it was a very planned trip.”

Born, raised and in the midst of vet school in Recife, Brazil, Rocha had previously lived in America for a year-and-a-half.

“I was an exchange student in 2014 in Indiana,” she said. “I stopped vet school for awhile so I could learn English and gain international experience. I also did an internship at Mesker Park Zoo in Indiana.

“It was my first experience with zoo animals, and it was pretty great. That’s when I knew for sure this would be my career.”

Even though she had read articles about the experience of other students at Fossil Rim, she was still surprised in some respects.

“This experience was a lot more hands-on than I expected even after reading what others had said,” Rocha said. “I was very impressed at how many (animal health) procedures we have every week. It’s a lot more than in a zoo setting.”

On that note, she point out some of the most memorable days.

“Nyla’s hoof trim was pretty awesome,” she said of the two-year-old giraffe. “It was my first time at a giraffe knockdown. It was very impressive, and I had a chance to learn what you do in that situation – the dose of drugs, the best drugs, specific (considerations) for giraffes during that procedure.

“I also loved all of the neonate exams. Addra (gazelle) was the first one we did, plus there were days for sable, waterbuck and others.”

Rocha was eager to work with hoofstock in general when she arrived at Fossil Rim, mentioning that kudu are one of her favorite animals at Fossil Rim.

“I also love giraffes, and was excited to do procedures on them,” she said. “It was awesome to get my chance. I was there for the birth of ‘Stretch’ (on July 28).

“Blood draws on the black rhinos were great. While the necropsies weren’t happy moments, they were great learning opportunities.”

Mammals do not account for all of her memorable moments at Fossil Rim.

“My experience with the Attwater’s prairie chickens was really good,” she said. “It increased my interest in birds a lot. When I just started here, we helped a lot with the APC release days when (U.S. Fish and Wildlife) came to get the birds and take them to the refuge.

“Holly and Julie let me do my own physical exams. We got to see those birds a lot, and I became fond of them.”

Shortly before her final day at Fossil Rim, Rocha gave a presentation to staff and volunteers about her project “Mineral deficiency in an Arabian oryx.”

“This female was a chronic case, so I was able to work on this since my first week here,” she said. “She had been skinny for the past year with no apparent reason. She had been monitored and fed appropriately, but no body change. The vets did clinical exams, fecal and blood samples, and she has always had a low parasite count.

“The blood test revealed low phosphorus levels. We discussed all possibilities and started ruling out the least likely causes. She was getting the nutrients, but she couldn’t digest and absorb them.

“Ruminal acidosis caused the disturbance with an acidic environment in her digestive tract, preventing mineral breakdown and absorption. We now believe the problem has passed, and she has just been dealing with the consequences of the condition. She is now responding with improved body condition and being active.”

“They are awesome,” she said. “They are always willing to teach and talk about their experiences. Even when it looks like they are super busy, they explain everything they are doing and how it can be done better. I’m pretty sure I can take everything they taught me here for my professional life in the future.

“It was a great experience. (Vet Tech) Brenda (Cordova) and (Vet Tech Intern) Allyssa (Roberts) were very helpful also to make my time here even better. They helped me get more comfortable with blood and fecal exams; I’m grateful for that.”

Rocha turned her attention to another department.

“I also want to thank the animal care staff,” she said. “Integration between animal health and animal care staffs is so important for the success of many medical procedures. The animal care specialists were always willing to give me information and teach things from their point of view, too, and I really appreciate it.”

Before returning to Brazil to complete her sixth year of vet school and graduate in February 2018, Rocha has another preceptorship at the St. Louis Zoo.

“Fossil Rim was my first wildlife center preceptorship, and this will be my second zoo preceptorship,” she said. “At a zoo in my hometown, I did research on animal training, which was interesting. That was after my return from Indiana.”

While it’s not all set in stone, Rocha does ponder her long-term future.

“I have many plans and options, and I’ve got time to figure it out,” she said. “Eventually, I would like to work towards a residency in zoo medicine. I think before that I will focus on domestic animals for awhile to get more experience.”

She was influenced by the positive comments of previous vet preceptees at Fossil Rim, and Rocha is all for steering someone else in the same direction.

“I would tell (prospective preceptees) to go for it,” she said. “It is a great experience you can’t get at a zoo. It’s a totally different place and you get to experience so many animal procedures.”

She also touted the perspective the wildlife center provides for guests who arrive through the Front Gate.

“Just a visit as a guest is going to be great,” Rocha said. “You feel like the animals are free and you are inside their environment, instead of feeling like the animals are ‘over there.’ I took a (guided) tour when we did the (orientation) meeting, and that was a great experience.”