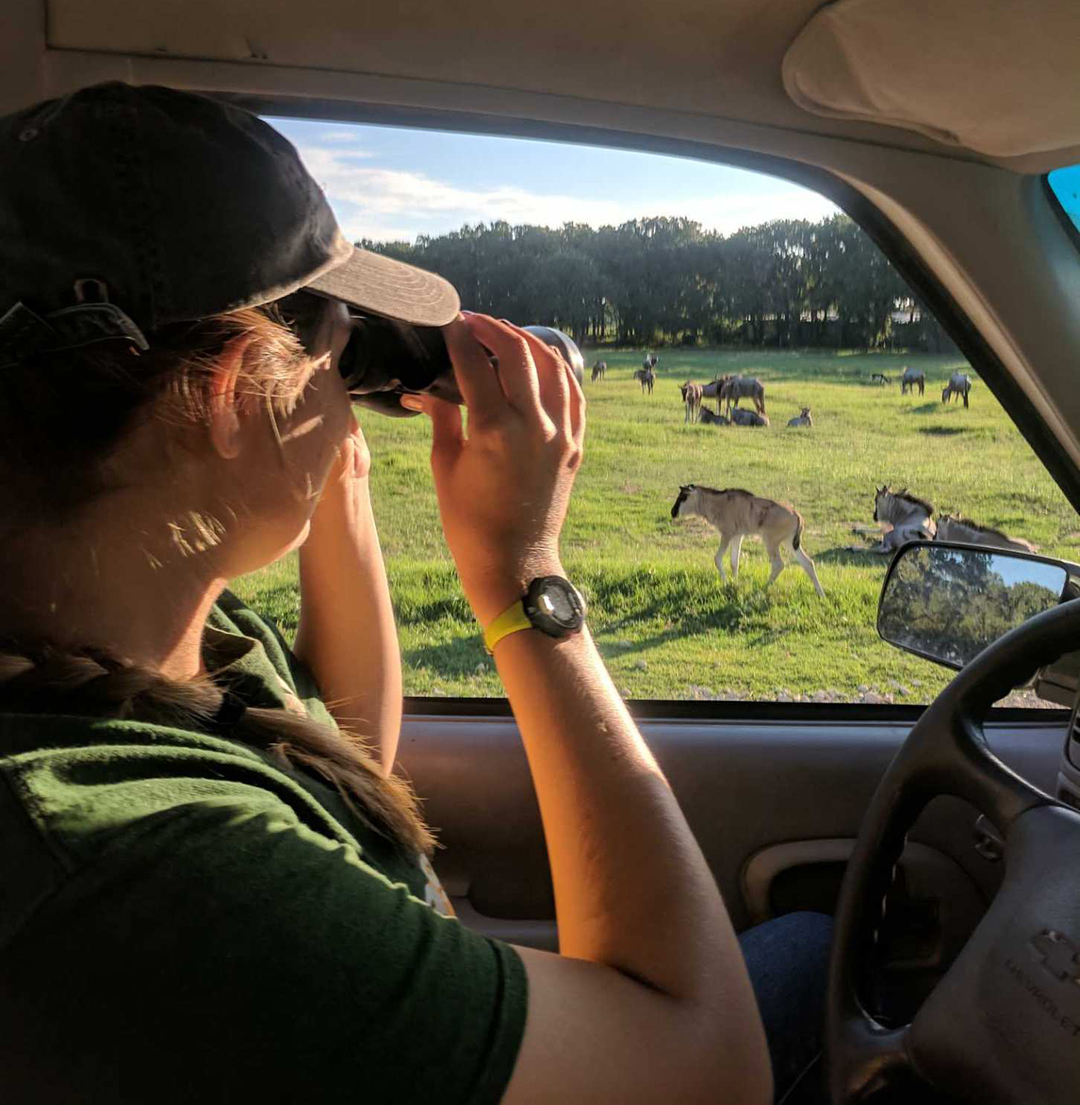 Ashley Fortner made the most of her hoofstock/behavior internship at Fossil Rim Wildlife Center to the tune of a paid position at another area facility, but how did it happen?

“I spent a year taking classes at Smithsonian Conservation Biology Institute,” Fortner said. “Since it’s a (fellow Conservation Centers for Species Survival) facility, I knew a lot about places like White Oak (Conservation) and Fossil Rim. On the website at George Mason (University where I was a student), it had (Fossil Rim’s) Kristen (Culp) as a focal student and mentioned that she did an internship at Fossil Rim. I’d done an internship at White Oak in 2016, and I thought this might be a similar experience I would enjoy.”

A native of Virginia Beach, Virginia, Fortner graduated from George Mason in May, where she majored in applied global conservation and minored in biology and sustainability. She headed to Fossil Rim just four days after graduation.

“I’d always had animals growing up, and my family started a pet-sitting business,” she said. “When I was in college, I realized an animal career was a natural next step.”

Fortner had an idea of what she might expect from her Fossil Rim experience.

“This is similar to White Oak in a lot of ways, such as having morning meetings and then everybody disperses,” she said. “When I was there, I worked primarily with rhinos. Coming here to work with hoofstock was a totally different ballgame. We did a lot of neonate exams here, and I played more of an active role here, because I dealt with species I could get more hands-on with.”

Her other internship involved working with elephants at Smithsonian’s National Zoo.

Fortner highlighted some of her most memorable moments at Fossil Rim.

“I think of Nyla’s first knockdown (for a hoof trim),” she said of the two-year-old giraffe. “I’d never seen something like that before, and a lot of people had come in from out of town. It was exciting to be a part of an experience that doesn’t happen that often.

“I would also mention a neonate exam where we were looking for one of the (addra) calves, which we don’t have a lot of. I actually spotted it, so that was a proud moment.

“Mike (Monson) let me pick out the tag number. It makes you feel like you’re a member of the staff when you are bringing something to the table – learning and then applying it.”

The other standout memory she referenced was the experience of her intern project that she presented to staff and volunteers a few days before departing.

“I compared this year’s breeding sable bull to the 2012 sable bull,” she said. “Can we expect the same behavior from different bulls, and are they ideal breeding bulls? I filmed the herd for two weeks, sitting and watching how the bull interacted with them. It was nice to be the sole person responsible for watching and then reporting back to the staff.

“I concluded that the bulls were very different, but they both tended to females very well. It showed that you can’t predict their behavior and how they’ll handle a herd.”

She pointed to a pair of Fossil Rim Animal Care staffers who had a heavy influence on her experience.

“I worked closest with Becca (McLachlan) and Mike,” she said. “They are very different personalities. Mike gave me a lot of opportunities to do things myself and prove that I knew what I was doing. I liked having his trust.

“Becca also let me get hands-on experience, but she made sure to teach me the history of the animals and how we got to where we are now. I enjoyed working with both of them. I was able to prove myself, but to also ask questions.”

Fortner came to especially enjoy some of the animals she worked with.

“I really enjoyed the Kordofan aoudad, because they were funny and had their own individual personalities,” she said. “My favorite individual animal was ‘Cayenne’ the Grevy’s zebra, because he’s spunky and always happy to see you.”

As for the future, she is excited to have a game plan.

“I got a job at the Dallas Zoo as an on-call animal keeper,” Fortner said. “It’s part-time now, and hopefully it turns into something full-time. I’ll be a swing keeper between elephants and North Savanna, which involves animals like ostriches, zebras and giraffes. I learned a lot about zebras and ostriches here at Fossil Rim, which was valuable for my working interview in July.

“I felt like it gave me an edge in confidence. It’s a good time in my life for this, and it will be fun.”

Looking long term, it seems her time in the classroom is not over just yet.

“I eventually want to go back to school and get a master’s or PhD,” Fortner said. “I’m interested in zoo welfare and zoo management, but I feel like I need experience as a zookeeper before I can understand all the challenges. It’s important to follow your dreams and do what makes you happy.”

While she definitely had some quality intern experience under her belt prior to Fossil Rim, Fortner points to her time at the wildlife center as essential to garnering her new paid opportunity.

“I really got some great hands-on experience with some species I’m interested in working with,” she said. “I also got a lot of professional development help from Mike and Becca in regard to writing cover letters and resumes. I also need to mention networking, because I think having the support of (Fossil Rim Hoofstock Curator) Adam (Eyres) was key to me getting my Dallas Zoo position.”

For those considering an internship at Fossil Rim, Fortner says “go for it” just as she did.

“You’re going to come here and work hard,” she said. “You’ll learn a lot about yourself, plus gain insight and inspiration about what you want for your future.  You’ll meet some really cool people who are doing great things.

“Even if we are talking about a general guest, I would definitely suggest visiting here. There are not a lot of animal facilities out there like this with the natural environment. It’s an opportunity you should certainly take.”