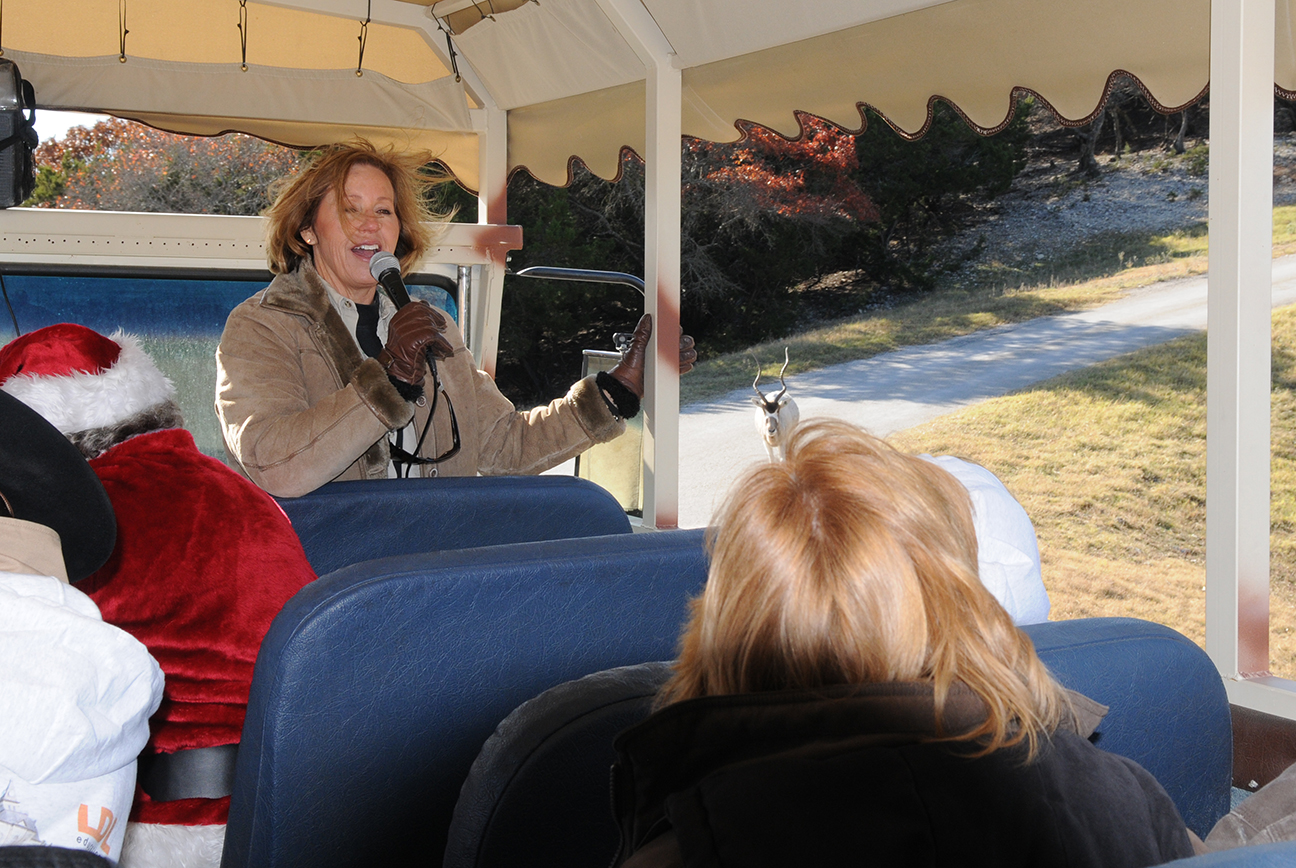 There are two Fossil Rim Wildlife Center volunteers who have been in action many years longer than anyone else.

Judy Oetting has been on the scene since 1983, and then Trich Zaitoon followed in 1984 – the same year the park opened to the public.

As it turns out, the two women were familiar with each other from their time at the Fort Worth Zoo.

“We were recruited from the Fort Worth Zoo by (original Fossil Rim Owner) Tom Mantzel,” Zaitoon said. “We were docents at the zoo. “In 1982 and 1983, he just let us come out here to enjoy it. We said he should open it to the public, and he did want more people to experience it. He had to do so, because it was very expensive (to operate).”

The desire to have wildlife education programs prompted Mantzel to recruit Zaitoon and several other docents.

“Tom encouraged us to put together (education) programs, and we brought some from the Fort Worth Zoo,” the Mansfield resident said. “At the zoo, we had 35 programs we had to be able to present. There were two segments of intensive two-week testing, and if you didn’t pass, you had to go through it again. We saw every first grader and fourth grader in Fort Worth ISD at the zoo, so Tom believed we could teach people at Fossil Rim.”

Zaitoon volunteered at both facilities for quite some time, but eventually made her choice.

“I was a docent at Fort Worth Zoo for three years before I came to Fossil Rim, and was at the zoo for 15 years total,” she said. “I’d spend one or two days per week at each place, but my heart was here, and so I eventually focused on Fossil Rim.”

As the docents were coming up with activities in the early days of Fossil Rim, Zaitoon recalled one particularly funny idea.

“We were very creative early on,” she said. “We gave our first tours in the back of pickups. One of our first ideas was to have students go on a hayride for a tour. We discovered almost immediately that it was a bad idea. Most of the animals were hoofstock and loved hay!”

Zaitoon and the other docents convinced Mantzel of the need for an education director. He made the hire, which set the stage for progression to Fossil Rim’s modern-day education department.

While she said the amount of visitors, the roads, tour variety and staff – originally three people on staff and more than 80 currently – have evolved significantly over the years, some things never changed.

“The animals have always been a priority,” she said. “That has never changed from day one. They were always healthy.

“That was the commitment and the passion those three (original staffers) had when we started. I’d bring soup to feed the guys in animal care.”

Fossil Rim is a diverse facility with a five-pronged mission statement, and Zaitoon shared her thoughts as someone who has introduced the mission to so many guests.

“The mission is imperative, because as I said the animals are the priority,” she said, considering the animals are referenced before any other aspect of the stated mission. “The mission statement is our goal. The bottom line is we breed (threatened and) endangered species to produce a healthy animal with quality DNA that we can release safely into the wild.”

For the record, the mission statement is: “Fossil Rim Wildlife Center is dedicated to the conservation of species in peril, conducting scientific research, training of professionals, responsible management of natural resources, and public education. Through these activities, we provide a diversity of compelling learning experiences that inspire positive change in the way people think, feel and act towards nature.”

When asked about her favorite Fossil Rim species, Zaitoon could not pick just one.

“I’d say maned wolves, red wolves, cheetahs and Grevy’s zebras,” she said. “My reasons for volunteering at Fossil Rim are purely selfish. I like how it makes me feel when I’m here, because this is where I feel like I make a difference in the world. We have the best classroom on Earth.”

While no tour guide other than Oetting will ever match her three-plus decades of Fossil Rim experience, Zaitoon is very encouraging to other tour guides who are discovering the presentation style that suits them.

“I want all of our tour guides to be successful,” she said. “I can show them what I do, but they have to figure out what works best for them. All of us have to learn about Fossil Rim and these animals, so training is always important in order for us to stay on the same page. We should say what Fossil Rim (management) wants us to tell the public.”

With North Texas Giving Day approaching Sept. 14 on what is a very important occasion for nonprofits like Fossil Rim, Zaitoon shared her thoughts on why the wildlife center in Somervell County is worthy of everyone’s donation.

“Because this is your chance to do something good in the world,” she said. “To support our mission is to support species around the world. This is the perfect opportunity to feel like you make a difference in the world.”

To learn more about this significant occasion, check out https://northtexasgivingday.org/.

She also had a request of a different sort.

“I’d like to encourage everyone, not only to give monetarily, but to give of their time,” Zaitoon said. “Come out here and be a volunteer at Fossil Rim, because volunteers are always wanted. You don’t have to do tours; my interest just happens to be in the animals. I’ve wanted to be in Africa since I was five, but this is a great alternative.

“There is any number of volunteer opportunities here. The commitment, the passion, is needed here. One person can make a difference in the world.”