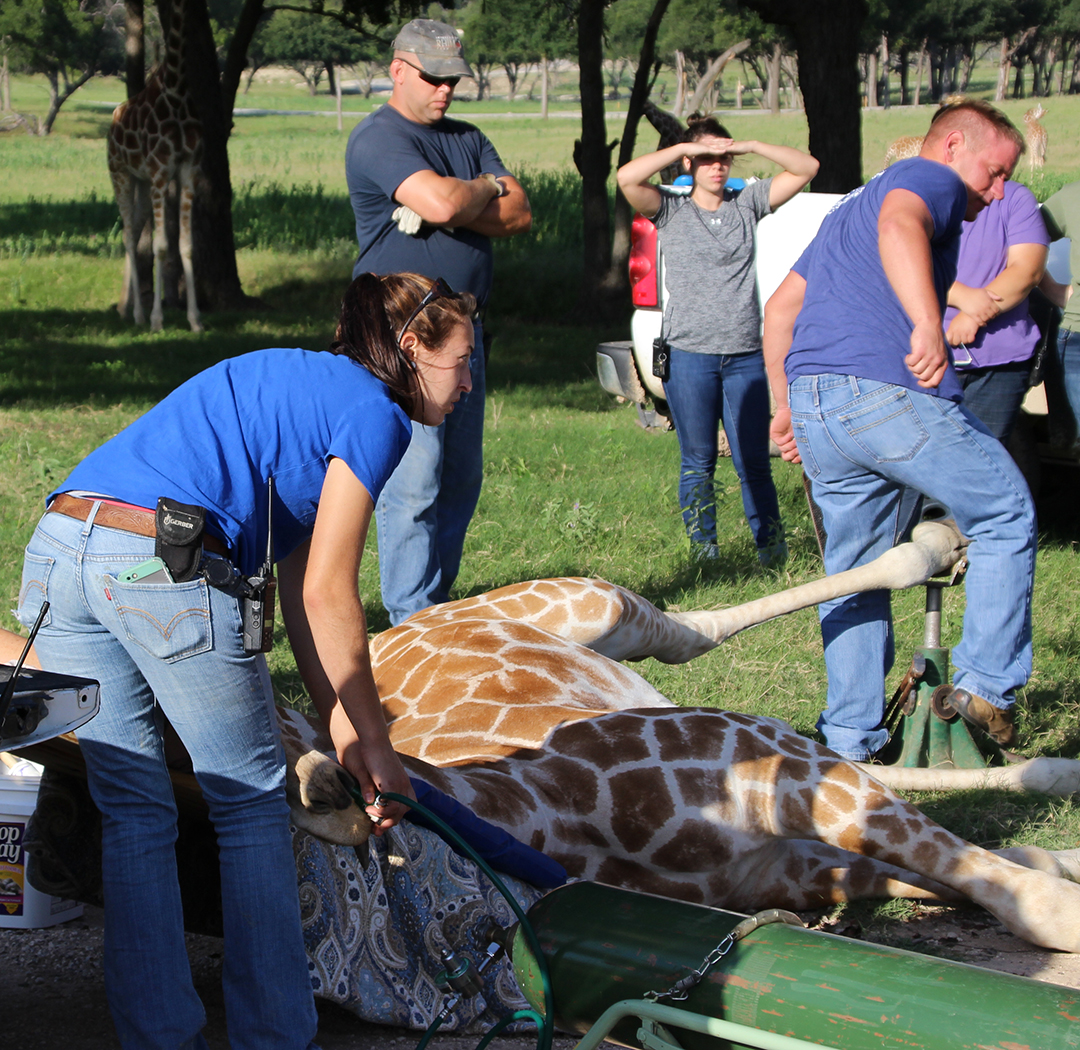 She had a procedure done on her two rear hooves in early July that should be really beneficial in the long run.

“Nyla had some flaring; one of the sides of the back hooves was growing outward instead of straight down,” said Fossil Rim Veterinarian Dr. Julie Swenson. “It’s not a big problem at first, but it can become an issue as it flares more out to the side. You want to correct it early on. If not, she could develop permanent hoof abnormalities and progress to significant lameness, early arthritis or maybe a cracked hoof.”

The issue did not seem to be random for Nyla.

“This is fairly uncommon here, because our animals have the space to walk amongst hundreds of acres compared to most settings where they’re in a very small area,” she said. “This tends to keep their hooves in pretty good shape. The thought is that some giraffes can be genetically more prone to hoof abnormalities, and her mother ‘Nettie’ had similar hoof problems.”

Swenson and fellow vet Dr. Holly Haefele had been considering the procedure on Nyla for several months, but they just tracked the changes in her hooves for awhile before making the decision to schedule the procedure about one month in advance.

Swenson explained the process of the procedure.

“All (10) giraffes were put in their yard the night before, so we’d know where they were,” she said. “That morning, we let them out and herded them toward an area we felt was safest for Nyla to be anesthetized. We got her going in the desired direction – away from the creek and large trees and toward an open, grassy field. Then, we darted her from a staff truck.

“The anesthetic drugs can take 10-15 minutes for full effect, and she became progressively more wobbly. Her head is so high up in the air that it can hit the ground hard, so you try to make the landing as soft as possible.”

Once Nyla was on the ground, the first priority was to get to her head and elevate it.

“All ruminants are prone to regurgitation, and we don’t want that while she’s under anesthesia, so we raise her head and neck by resting it on a ladder that is propped up against a truck,” Swenson said. “Once we have her in a good position, the farrier starts working on her feet. A farrier comes and helps us out when we have complicated hoofstock (procedures). His name is Ryan Frizzel.

“He is a domestic animal farrier who mostly works with horses. Ryan is very good, so it’s nice to have him come help us.”

While Frizzel was trimming Nyla’s hooves, Fossil Rim’s animal health staff was busy with other aspects of giraffe care.

“We put in an IV catheter to make sure we had good access for fluids and drugs,” she said. “We took several arterial blood samples to check her blood gas status to make sure she was well-oxygenated. We also pulled blood for her regular testing to get a (complete blood count) and such. We did a full physical exam and intubated Nyla to give her supplemental oxygen and make sure she was breathing well.

“Once the farrier was done with her feet, we also did radiographs of her. After that, we moved all the equipment out of the way, laid her head back down flat and gave her the anesthesia reversal agents. The animal care staff held her head down until she was awake enough that she could stand on her own.

“That kept her from flailing and trying to get up before she was ready. After a couple of minutes, she started rocking herself up and then ran off.”

Swenson was pleased with how smoothly it went to Nyla’s benefit.

“Nyla did really, really well,” she said. “The farrier did a lot of hoof trimming. He thinks he can do some more, so we’ve scheduled another procedure for late July. Doing the trimming in two procedures allows us to keep Nyla from feeling uncomfortable afterwards.

“We are planning to put wooden blocks on her hooves the next time. They will raise her hooves up and keep the sensitive part off the ground.

“Beyond her hooves, Nyla looks very healthy. Nettie wore blocks for awhile after she had this procedure and she’s doing great now.”

There were nearly 20 people in attendance for the procedure.

“It was good to see the teamwork among our different departments, plus it was an opportunity for people from other institutions to come get experience with a giraffe immobilization,” she said. “A Fort Worth vet brought his vet tech, who hadn’t seen one before. A giraffe knockdown here is very different than in a traditional zoo setting.”

Interestingly enough, this procedure on Nyla actually segues perfectly into the issue of Fossil Rim animals being potentially overfed.

“Eating too much protein results in animals’ hooves growing faster, just as it does for a person’s fingernails,” Swenson said. “A great example of this at Fossil Rim is the aoudad. They are known to come up to cars and get fed a large amount of pellets. They tend to have overgrown hooves from protein levels that are too high.

“Just like humans, it’s about everything in moderation for animals. Our animals are given a good diet that meets all of their requirements, so issues like this with Nyla are a matter of them getting too much. Plus, people bring items into the park they aren’t supposed to and feed them to the animals sometimes, which also factors into this hoof growth.

“We want guests to enjoy their visit, but as veterinarians we have to keep the health of the animals as our top priority. Not feeding your entire bag of food to one animal, but spreading it out to many animals, is the way to go. The entire bag comment is certainly relevant to a giraffe like Nyla.”