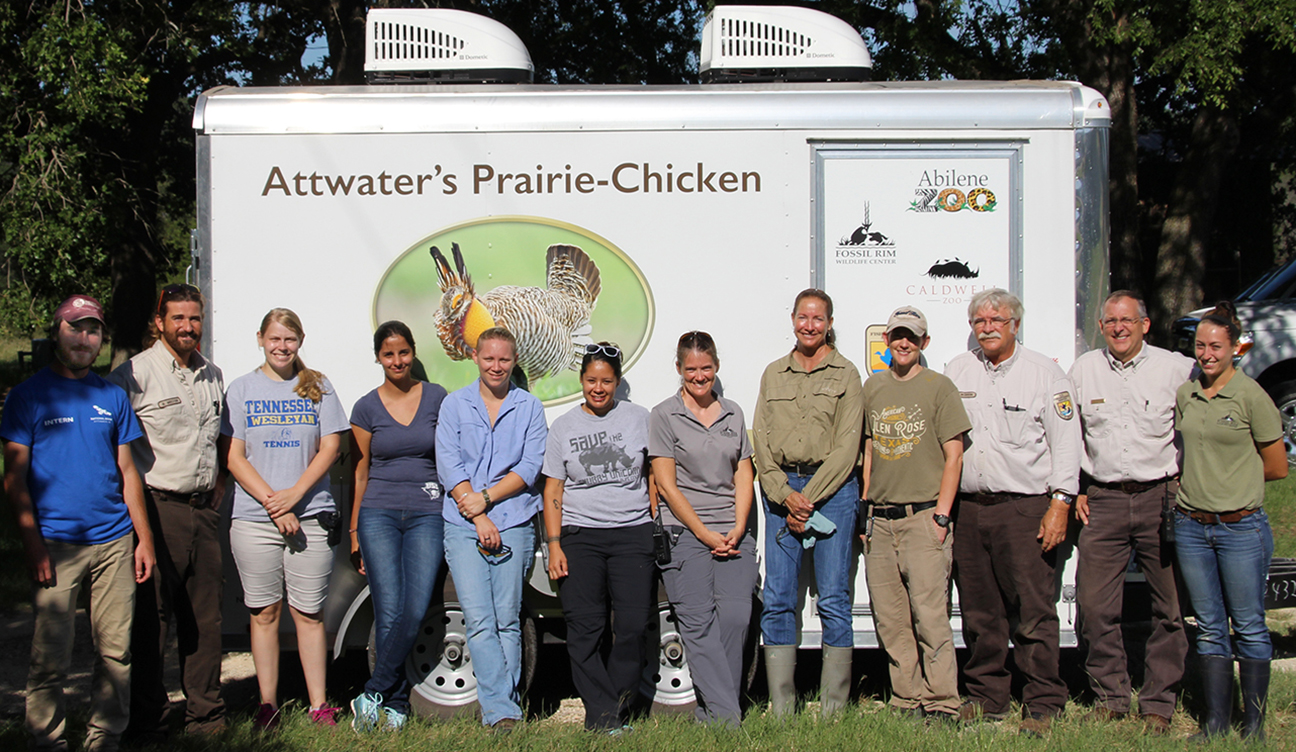 That meant a visit from U.S. Fish and Wildlife Service (USFWS) Biologist Dr. Mike Morrow in mid-July for the year’s first transport. He was joined by two USFWS biologists, as well as an intern from American Conservation Experience.

“One of our biologists wanted to get more familiar with this pickup-and-transport process, while the other two men with me are learning the ropes of our program overall,” Morrow said.

Fossil Rim Avian Care Specialist Cara Burch did not mind having additional guests for this shipment day, which pertained to adult APCs. Morrow and company would return the following week for another shipment, but it would involve “teenage” birds that are 9-10 weeks old.

“The biologists Mike brought seemed very helpful and interested in the entire process,” Burch said. “Just like us, they’re curious to know about all aspects and stages of the APC process. I can’t speak for them, but I bet it’s interesting for them to see where the birds they will be tracking this year were raised.”

APC counts in the wild are done each spring. There were 32 birds at the refuge, as well as 10 on private land in Goliad County. While the incoming shipments will increase the actual total significantly, it will not be “officially” counted again until spring of 2018.

“We are looking at four shipments from Fossil Rim this year,” said Morrow, who arrived in a USFWS truck pulling the new APC transport trailer, which was provided by funds raised from the Friends of Attwater Prairie Chicken Refuge. “We could’ve fit many more birds this time, but this is the first time we’ve used the trailer, so we wanted to take it easy and make sure we didn’t have any unforeseen issues. (The following week) we are taking birds to Goliad County for release.

“There is a pretty substantial amount of coastal prairie left down there. It’s a very good partnership we have there with The Nature Conservancy, and they have the primary contact with the landowner.”

While the trailer can transport 120 APCs compared to 60 APCs in the USFWS van Morrow used to bring to Fossil Rim, he anticipates keeping the shipment closer to 60 on most trips.

“The main reason for the trailer is when we start making especially long trips, we will have that option to transport more birds,” he said. “Also, while the van worked in terms of travel conditions, this will be a more pleasant way for the birds to be transported.’

Morrow was pleased to say the conditions on the refuge look promising for this year’s incoming APCs.

“We’re optimistic for a good year,” he said. “We have at least one radioed (wild) hen with some chicks and we saw an unradioed hen and her brood (in mid-July), as well. The weather has been good this year.”

Unfortunately, flooding in April 2016 devastated the wild population, which dropped from 130 to 42.

“We just had such a bad year in 2016 that we didn’t have the birds to take advantage of the good conditions since then, which is disappointing,” Morrow said. “We’ve had some bad luck with flooding issues during nesting season each of the last three years prior to this one. The fact we got any reproduction during those years was a testament to the hardiness of these birds. In 2016, that was probably the worst flooding on the refuge I’ve seen in my 25-plus years there.

“Hopefully, we get more normal conditions that will allow us to move forward. The observations we’ve made in the field have indicated the birds are capable of reproducing, but we’ve still got a long ways to go.”

Burch shared some 2017 production numbers from Fossil Rim and how the birds are looking as they head off to the refuge and the private land in Goliad County.

“Even though 2017 wasn’t the record-breaking year we are always striving for, it was still a solid one,” she said. “We expect 164 APCs to be released from Fossil Rim this year. We are always trying to improve the quality of bird that goes to the refuge. It’s a hard world out there, and we need to make sure we are giving them the best chance for survival.”

“We’re fortunate enough to have the pen space to allow them to learn to forage for grasses and invertebrates,” said Molly Shea, who transitions from the hoofstock department a few months each year to assist with APC “chick season.” “Every year, we brainstorm ways to help them survive at the refuge. For example, this year we decided to wait a little longer before releasing our first group of chicks, hoping the larger and older birds will be better-suited for the transition to life on the refuge.”

As Morrow explained, he has come to see Fossil Rim’s APC program as a beacon of stability.

“Production is down a bit this year at the other facilities,” he said. “Fossil Rim is stable in production, as it always is. We will end up releasing around 225 birds this year – maybe more. The stability within the Fossil Rim staff, led by Avian Curator Janet Johnson and Cara, is a key reason the APC production stays strong. A lot of it involves very subtle technique, so having experience is half the battle.”

Burch credited the help of Molly Shea, who transitions from the hoofstock department a few months each year to help with APCs, as well as this year’s APC interns Neil Jones, Chelsea Truitt and Chelsie Smith.

When it comes to eventually paving the way for sustainability of a critically endangered species, it takes determined folks like Morrow, Johnson and Burch.

“We are still optimistic about the future for APCs,” Morrow said. “It was very important that we identified red imported fire ants as a threat and worked aggressively to address them. We need to get the wild APC population up to the level where it can withstand some of these catastrophic events, but in the meantime the captive breeding program is a safeguard for this species.

“We can use them to repopulate areas where the (wild) birds get in trouble. The APC recovery program will continue to be very dependent on the captive breeding program for years to come.”

Come rain or shine for the forecast of the APC population, Burch said the effort at Fossil Rim must continue undeterred.

“I like to think we always have a push-forward attitude,” she said. “Every year, we work 100 percent for the birds. If the refuge had a successful previous year, we want to keep adding to the population so it can thrive.

“If the refuge had a challenging previous year, we need to produce as many birds as possible to bring those numbers back up. Our only option is to stay positive and keep working.”

To learn more about the APC National Wildlife Refuge where Morrow will transport most of the Fossil Rim birds, check out http://fossilrim.org/2017/06/19/national-refuge-stands-strong-for-future-of-apcs/. Donations for the APC recovery program can be made at http://www.attwater.org/.