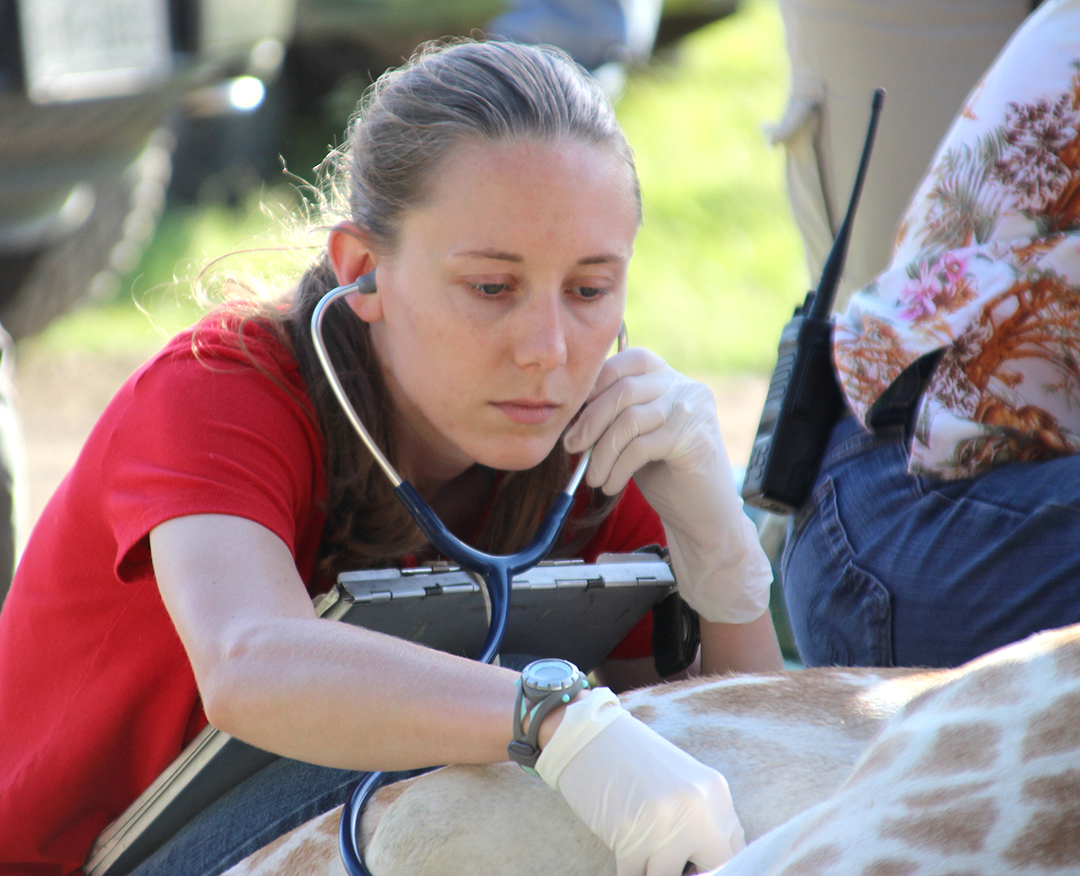 In 39 days at Fossil Rim Wildlife Center, Paige Harrelson experienced a lot as the veterinary preceptee for the animal health department.

“Last summer, I went to the AAZV (American Association of Zoo Veterinarians) Annual Conference and spoke to (Fossil Rim Veterinarian Dr.) Julie (Swenson),” Harrelson said. “I fell in love with the whole idea of this place.”

Raised on a cattle farm in rural North Carolina, Harrelson earned bachelor’s degrees at North Carolina State in animal science and poultry science. She is early in her final year of veterinary school at NC State and is on course to graduate with a zoological medicine focus in May 2018.

Even after her encounter with Swenson, the preceptee was still a bit surprised at how her Fossil Rim experience turned out.

“I wasn’t expecting as much hands-on as I got,” Harrelson said. “They provide (preceptees) a lot of opportunity to get involved in the actual medical care – I did intubations, put in catheters and did blood draws. I went out in the field a few times where it was only me with someone from animal care to do neonate exams. The trust the vets put in me to be able to get the hands-on experience was refreshing.”

In regard to some of her most memorable experiences at Fossil Rim, Harrelson did not need to ponder her choices for long.

“The (endoscopic) procedures on the maned wolves were really awesome,” she said. “I’d never worked with that species before. Doing such an intense medical procedure – anesthetizing them, doing the endoscopy, ultrasound, radiographs – and being that involved in all of the diagnostics that were happening; it is such a fascinating species.

“Also, I think about the giraffe immobilization we did to be able to do a hoof trim. It was interesting with so many people involved and being that close to the animal. Seeing how the anesthesia (procedure) is so different when modified for an animal that big was fascinating.

“The other experience that really stands out was getting to help care for the two cheetah cubs that are being hand-raised now. They are super cute.”

Before her time at Fossil Rim came to an end, Harrelson gave a project presentation to staff and volunteers.

“My project was a case report on two Attwater’s prairie chickens that each had an abscess in their brain,” she said. “I investigated to figure out what caused that. I looked at the pens they were in, where they may have interacted, the brooders they were in and if one brooder had an increased mortality rate that may have affected the immune system of the chicks.

“I chose that project because I have a fondness for birds and a background in poultry. Having a chance to work with the prairie chickens was a reason of mine for coming here.”

“They are all incredible teachers,” she said. “They take so much time from what they are doing to explain everything in detail. Every time we would get in the van, I was getting quizzed on drugs, our hoofstock, the problems different species have – it’s all so relevant and useful to have gained this experience.

“I worked with Brenda a lot on running all of the blood, reading blood smears and doing fecal exams. She helped me get a lot more comfortable with those things.”

On occasion, Harrelson got to learn the ropes in a different department.

“I shadowed (Fossil Rim Senior Animal Care Specialist – Hoofstock) Justin (Smith) twice,” she said. “One day, I went with him to close (the giraffe area) and another day I watched him close (the white rhino area). I saw the husbandry aspect, which is so important.”

As she heads back to NC State, Harrelson can see her career path ahead.

“I plan on spending a few years working in avian and exotic medicine private practice, and then seeing where that leads,” she said. “I’d like to go into a residency to get board-certified.”

She pointed to a few ways in particular the Fossil Rim experience should help her in the future.

“I think everything I did here will have direct applications,” Harrelson said. “I learned about a lot of specific diseases these animals are prone to and how to prevent them, gained hands-on experience doing anesthesia in the field with minimal monitoring equipment, as well as the more standard anesthesia in the clinic. It was helpful to review all the different drugs we use (at Fossil Rim), and which species are compatible with which drugs.”

Should the topic come up in conversation, it sounds like Harrelson will be pointing vet preceptees toward Fossil Rim.

“I had an absolutely great experience,” she said. “I feel like there are a lot of zoos where (preceptees) go and do a lot of observation, but this is not one of those places; you are going to work. The best way to learn is to jump in.”

Harrelson added that, when in Central Texas, anyone with an appreciation for animals should take the journey through the wildlife center.

“This place is different than any zoo you’ll find; there are herds of hoofstock that aren’t feasible to have in most other places,” she said. “It’s a unique experience that provides close interaction with these animals. It’s worth coming here.”