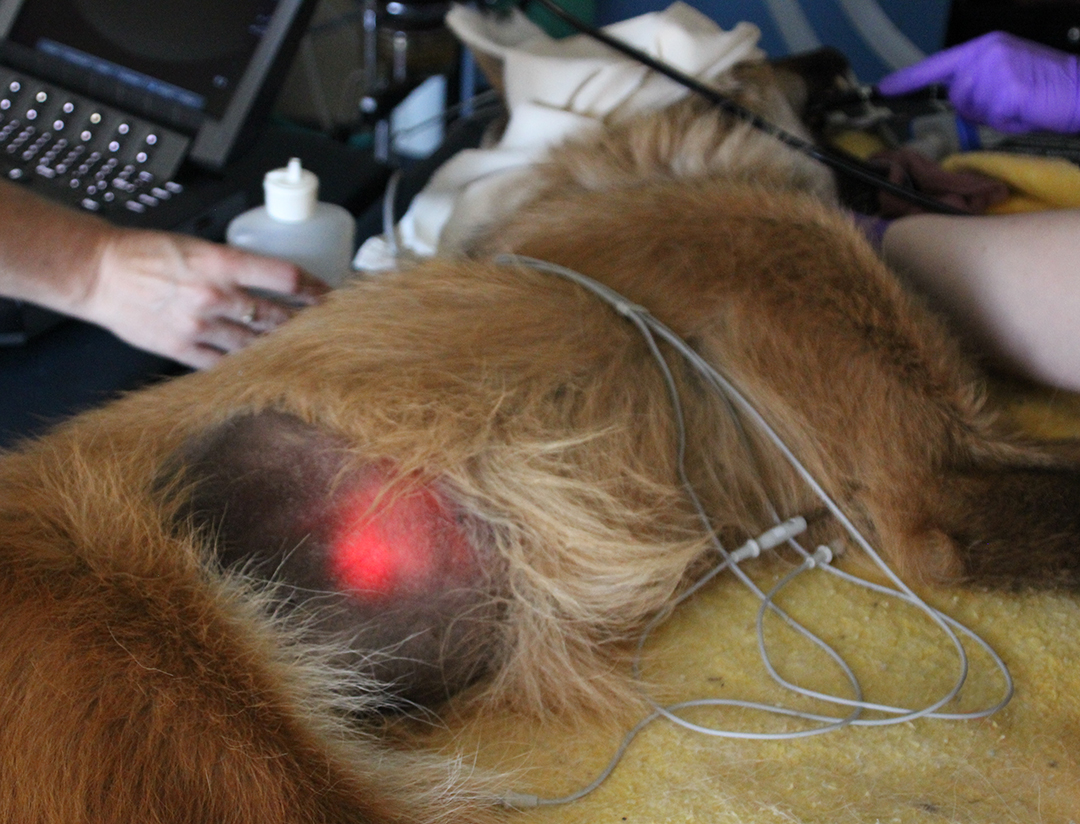 Although Fossil Rim Wildlife Center veterinarians Dr. Julie Swenson and Dr. Holly Haefele work hard while looking out for the best interest of the park’s approximately 1,100 animals, they always appreciate knowledgeable help from outside sources.

In mid-June, staff from MedVet Medical and Cancer Centers for Pets made the trip from Grapevine when two maned wolves were being examined.

“Holly and I were pretty sure these maned wolves were dealing with gastrointestinal (GI) issues, but that’s mainly because they had some evidence of regurgitation in their (yard),” Swenson said. “Maned wolves have a really high incidence of GI disease, especially inflammatory bowel disease. We think it could be related to this animal not being very genetically diverse within its small population. It wasn’t that we suspected this to be the issue just because they are skinny, although that would be one of the signs seen.”

“It’s uncommon that we find undigested food in the feces as Jason did,” Swenson said. “So, to have that in conjunction with regurgitation and being skinny, those are too many factors pointing to GI problems.”

Swenson mentioned the familiarity with MedVet of Grapevine.

“We’ve worked with them on other cases, particularly Dr. Erika Pickens, the internal medicine specialist,” Swenson said. “She’s always been very willing to donate her time. If we have something that requires a lot of equipment, anesthesia or medication, we always offer to pay for that. As far as her time, effort and use of her equipment, Erika is often very generous and donates those to us.

“Otherwise, it could end up very expensive. Having that relationship where they are willing to help is wonderful for us from a budget standpoint.”

While MedVet staff brought their own equipment, that was not the most important aspect.

“We actually have our own endoscopy unit and a nice ultrasound machine, so the key for us when MedVet visits is Erika’s expertise,” Swenson said. “Having her run the equipment is helpful because internal medicine is what she does day in and day out. She’s going to be a lot better at pinpointing little details and small changes than we would, since we’re doing a little bit of everything each day.

“The scope goes to the top of the duodenum, or the first section of the small intestines. An upper GI endoscopy is a fairly standard procedure among animals and humans.”

A male maned wolf “Mac” and a female “Sofia” were brought to the clinic separately for the procedure. After the wolf was anesthetized and intubated, MedVet staff shaved some of the thick, fluffy hair on the abdominal cavity to create a spot for the ultrasound.

“Maned wolf hair is very long, so ultrasound doesn’t get good imaging through it,” Swenson said. “After shaving them, you get much better contact with the probe on the actual skin for a better image of the abdominal cavity.”

While Pickens performed an ultrasound, Haefele drew blood samples. The wolf’s temperature was monitored rectally, which is the case for most Fossil Rim species.

“The entire procedure was valuable experience for Paige,” Swenson said. “It’s a fairly common procedure in domestic animal medicine, so most students have seen it in school. To be able to then apply it to an exotic species and see how the procedure is similar, even among different species, is helpful so she can extrapolate the information she knows and apply it to a species she doesn’t know.”

As MedVet performed the endoscopy, the Fossil Rim crew monitored vitals for the anesthesia, took a urine sample to check the wolf’s urinary tract system and a gingival biopsy of tissue in Mac’s mouth during his procedure only. They also drew blood for various reasons, including helping the nutrition advisor for the maned wolf Species Survival Program (SSP), who had asked for samples.

Haefele spun the blood samples in a centrifuge in preparation to send some of them off to Henry Doorly Zoo in Omaha.

“The zoo made a research study request that we get extra samples of maned wolf blood for their project,” Swenson said. “It’s nice because most zoos and wildlife centers are very collaborative, as far as research is concerned. Since we had these wolves under anesthesia with easy access to samples, we took the opportunity to collect them and share with the researchers.”

Bloodwork done in Fossil Rim’s vet clinic is a significant aspect for the animal health department. While Haefele was filling in for Veterinary Technician Brenda Cordova on this particular day, Cordova estimates that up to 35 percent of her job involves blood-related lab work.

“We do send some of our samples out for testing, as opposed to Brenda testing everything in-house, but she still has to get them ready – spin the blood down into either plasma or serum, package it up and fill out plenty of paperwork for the various institutions,” Swenson said.

Speaking of testing, the vets later received word these maned wolves were just dealing with GI issues that are not uncommon for the species.

“We were waiting on the results of the biopsy samples (taken during the endoscopy), which provided confirmation of diagnosis on their GI tract,” Swenson said. “All the tests we ran show they are otherwise in good health.”