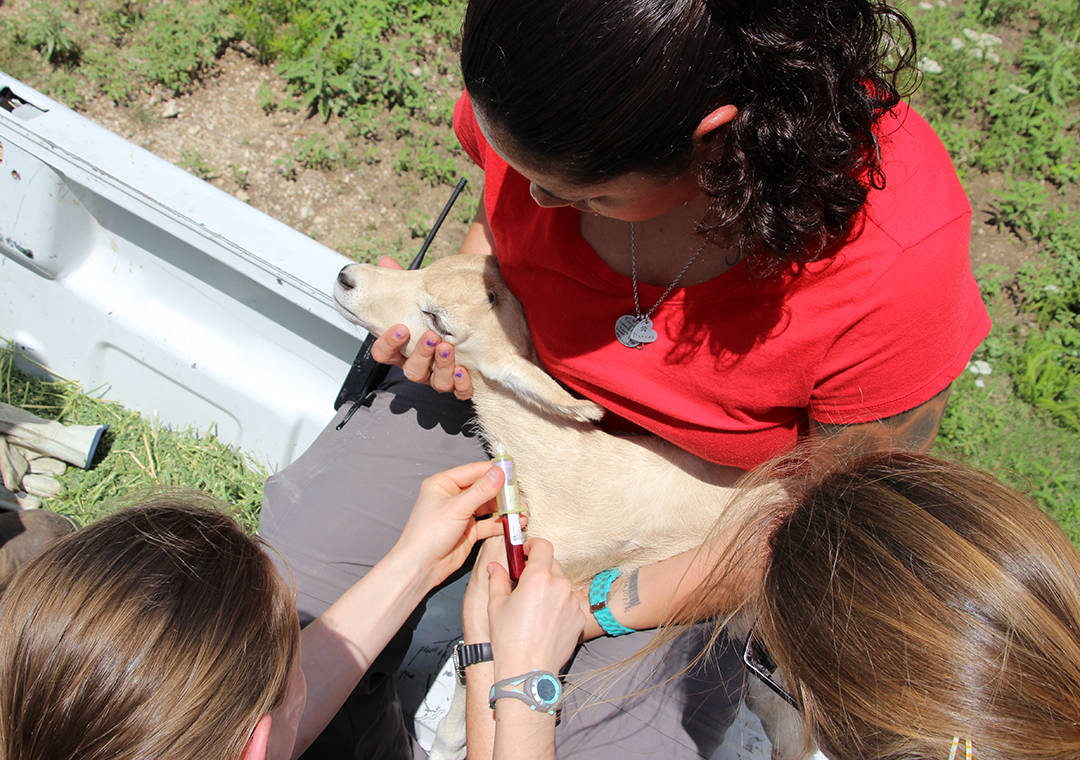 With more than 1,100 animals at Fossil Rim Wildlife Center where conservation breeding is the name of the game, neonate exams are a key part of the process for the animal health and animal care departments.

Considering most Fossil Rim animals have hooves, Director of Animal Health Dr. Holly Haefele aimed her focus in that direction when discussing neonates.

“Ideally, we do antelope neonatal exams at 24-48 hours old,” she said. “We don’t want to disrupt the mom-calf bond or keep the calf from getting good colostrum in the first 24 hours. Some species won’t put up with interference.

“For gemsbok, the only thing we do if we can find the babies is tag (their ear). The moms are funny about not wanting to take their calves back, even though most of these exams only take about 10 minutes.”

When an issue is identified, the next step is how to proceed as a staff.

“The biggest thing that is life-threatening for a neonate is failure of passive transfer,” she said. “If your lab work suggests a calf didn’t get colostrum, you have to assess each situation as to how you go forward. Often a calf is pulled for hand-rearing or you might give it a shot with mom after the benefit of some antibiotics.”

Before a calf can be examined, it must be acquired – often with a protective mother in the vicinity.

“We let the hoofstock staff handle the acquisition of the neonate, deal with other safety precautions and then we just join them in the back of a staff truck,” Haefele said. “Depending on the species, some dams guard their calves extremely well and are very aggressive to anyone trying to capture it. Addax are pretty good moms, so they will try to get you.”

“Sometimes, it’s as simple as opening the car door, leaning down and grabbing the calf. In other cases, shields are used to hold off mom while someone else picks up the calf.”

Once the animal health staff begins, the physical exam always involves a stethoscope.

“We are listening for any heart abnormalities – heart murmurs or arrhythmias, but we are also listening to the lungs,” Haefele said.

For calves, their temperature is taken rectally.

“That’s how we assess neonate temperature because it’s effective,” she said. “If an addax neonate had a temperature of 98 (degrees Fahrenheit), for example, then we’d be concerned. The average addax temperature is 101-103.”

When blood is drawn, there is so much to be evaluated from that alone.

“We do some standard testing,” Haefele said. “Blood glucose level is a good indicator if the calf has recently nursed. If the level is really low, that’s a worry because the calf hasn’t eaten in awhile. We do a quick assessment to determine if the animal has gotten colostrum – does it have passive transfer?

“That’s going to help it fight off any diseases. We do genetic sampling, and a number of institutions we work with are doing genetic analyses on those species.

“We do a complete blood count to make sure the animal has the right number of red blood cells and white blood cells. We bank serum, in case we need to do disease investigation in the future or if other institutions ask for research samples.”

Fossil Rim’s veterinary technician takes the blood samples back to the vet clinic and performs all of the aforementioned assessments in-house.

Calves are weighed on the spot.

“Our handheld scales are easy to use because they fold up and fit in a toolbox that has all of our implements for a neonate exam,” Haefele said. “Addax calves usually weigh 14-17 pounds, so this method is very practical for animals of that size.”

Neonate ears are essential to the exam process in regard to tags and microchips.

“We use the same ear tag method for all hoofstock,” she said. “When we have our hands on most hoofstock, we give them a tag because it’s an easy way to identify. The ear tag location is sex-dependent – females in the left ear and males in the right. Neonates also get a microchip subcutaneously at the base of their left ear that we read with a wand as a second ID method.”

The toolbox she referenced is essentially a neonate kit, and every member of the hoofstock staff has one.

“There are various tag colors based on the year of the calf crop,” Haefele said. “For example, this year sable are white and last year they were blue. Addax are the exception, since they are always green and their numbers come in sequential order.

“The toolboxes also have tubes to collect blood and serum, microchips and forms we fill out for each calf. Our hoofstock staffers don’t always have to have vet staff there when they do a neonate exam, but we like to be there when possible. They are good at drawing blood.”

Haefele also discussed a couple of animals outside the hoofstock realm that are very relevant to neonate exams.

“Other neonates we deal with (normally) are cheetahs and Attwater’s prairie chickens (APCs),” she said. “APCs are a totally different story because they’ve been artificially incubated and hand-reared on purpose. They are weighed once or twice daily, and see the vets up to three times daily. Neonatal care for them is very intensive.

“Cheetahs are even more skittish than hoofstock when you handle their cubs, so we are very hands-off until the mom gives us a safe opportunity. Oftentimes, our first look is just to count how many cubs she has.

“Then, we’ll assess her behavior as we go along. If we are worried about something, we might try to weigh the cubs every other day in the first couple of weeks, but that’s unusual.”

While neonate exams are a popular duty among many staff members, Haefele said it is important to stay on task.

“Everybody loves babies, so everyone is excited about doing a neonate exam,” she said. “But really, the most important thing is for that kid to bond with mom, so we don’t want to do anything to interrupt that.”

Veterinary preceptees, vet tech interns and hoofstock interns often comment about how they are surprised to be involved in so many opportunities to work closely with neonates.

“Handling a brand-new addax calf can be one of those things that really ‘gets you,’” Haefele said. “They’re the cutest babies we have out here, and knowing there are less than 100 in the wild makes an impact. It can really turn you on to this profession and drive you to want to stay with it.”

Though time apart from mother must be minimized, the information gained on Fossil Rim’s new arrivals is invaluable.

“These exams and the data we gain are very important,” Haefele said. “We are proud that we have a large data set as a result, so it makes it easier to compare and see what’s out of the ordinary to serve the best interests of these animals.”