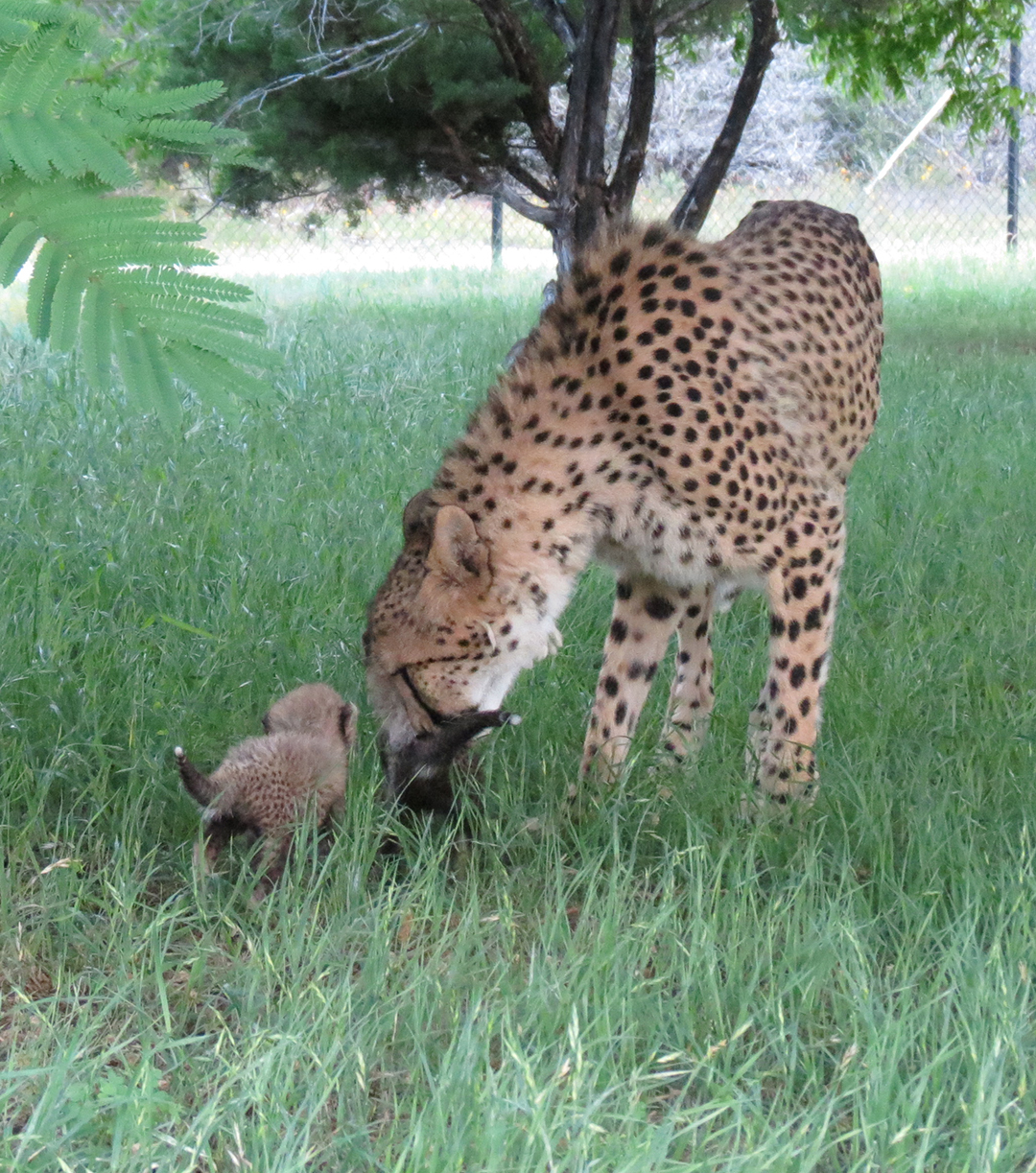 With a cheetah cub’s behavioral and social development on the line in May, Fossil Rim Wildlife Center Carnivore Curator Jason Ahistus had to make an impromptu road trip.

The story begins back on May 13, when Fossil Rim’s cheetah “Charo” gave birth to a trio of male cubs, which followed their mom’s bean-themed name: “Garbanzo,” “Borracho” and “Pinto.” Considering the births happened on Mother’s Day weekend, it was already shaping up as a heartwarming story.

While Charo began to prove herself as an attentive, first-time mother, a single cheetah cub was born 700 miles away at the St. Louis Zoo on May 16. On May 18, the female cub was pulled from its mother for hand-rearing. The next day, the decision was made by Fossil Rim, St. Louis Zoo, Cheetah Species Survival Plan (SSP) and Cheetah Breeding Centers Coalition to transport the singleton to Fossil Rim and attempt to have Charo raise it with her cubs in a cross-fostering situation.

“A cheetah mother will never raise just one offspring,” Ahistus said. “There are several theories why, and one is not enough stimulation for the body to continue to produce milk. So, when you have one surviving cub that isn’t weaned, you either pull it for hand-raising or try to cross-foster.

“Cross-fostering is the first option, because if it is raised by the cheetah mother, it will exhibit proper behaviors like socializing with other cubs and learning all the important lessons that only a mother can teach, all of which helps increase the likelihood that the cub will one day produce cubs of its own to help sustain the cheetah population. The cub has to be put with a litter of similar age, so this was a pretty perfect scenario due to the cub’s age and timing of its birth.” 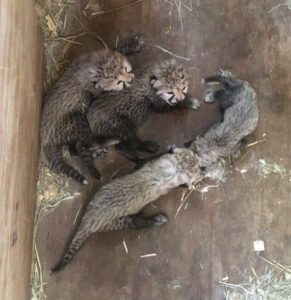 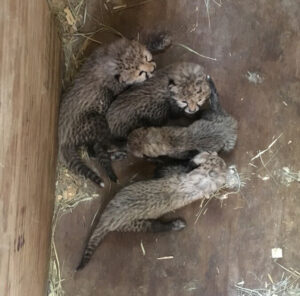 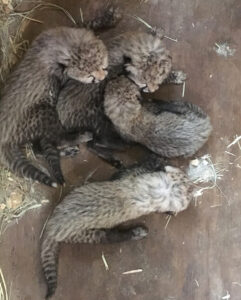 “St. Louis Zoo is also a cheetah breeding center, so we work with them regularly. I’ve known several of their staff members for years, which builds a great working relationship. Anytime you’re dealing with a managed species population, all the SSP institutions will pool their efforts to help those animals survive.”

Ahistus left Fossil Rim on May 19, as he met St. Louis personnel halfway, picking up the singleton outside of Oklahoma City. He returned to Fossil Rim at 5 a.m. on May 20, fed the cub some formula and then attempted the cross-foster at 7:20 a.m. alongside Fossil Rim Cheetah Care Specialist Alex Sharkey.

“Everything happened pretty fast, and you want to get this done ASAP so the cub can get with its new mother and have mother’s milk, as opposed to formula, plus there’s the behavioral factor,” he said. “There are a lot of variables, and so the process can be difficult. There’s the stress on mom, cub age and developmental differences, cub weight, how fast you facilitate it, how hands-off you can be, cub health, etc.”

Ahistus made sure not to feed too much formula, because he wanted the cub hungry when it was introduced to Charo. All the cubs were weighed and gender identified, plus a small spot on the St. Louis cub was shaved for ID purposes. The cub was rubbed with the bedding in the den and placed at the bottom of the pile of cubs before the staffers exited the yard within three minutes.

There were not monitoring cameras in that particular cheetah yard, so they watched with binoculars.

“We watched Charo go in and out of the den several times over the course of an hour, but she never removed the cub from the den, so we had a very good feeling about it,” he said. “The next morning, we were able to get in the yard when Charo was eating and we found all four cubs in a pile with full bellies. Charo allowing the cub to nurse was a great sign, because it showed acceptance and care. A few days later, we weighed the cubs and all had gained a similar amount. At that point, we were pretty confident it was going to work out.”

Even if the introduction had been a bumpier ride initially, Ahistus was determined not to make any rash decisions.

“Was mom going to take her out of the den and dump her in the grass – reject her?” he said. “Even in that instance, you go against your first instinct to go get the cub – instead you ride it out. We had a case once where mom initially rejected a cross-foster cub, but went back and then accepted it. Fortunately, we never had any issues this time.”

Part of what makes this so special is that Charo stepped up the way she did despite being a first-time mother.

“As a first-time mom, we didn’t know what she would do,” Ahistus said. “But her cubs were seven days old when we did the cross-foster, so we knew she was doing a good job with the cubs she had. There is always stress and ‘what-ifs’ for something like this, but you study what has worked and not worked at these breeding centers and do your best. We were excited, because it’s nice to have those challenges and see it work out so well.”

Keeping with the bean theme, the cross-foster cub was named “Lima.”

“The cub is still clearly smaller than the others, but she’s doing fine – running around with the other cubs and playing,” Ahistus said. “You see mom interacting with it; they’ve bonded. Its mobility has improved, as well.”

This was the third cheetah cross-fostering attempt in Fossil Rim history. In 2006, the cheetah “Cinnabar” fostered two cubs from two separate litters along with her own litter. One foster cub was five days older than her litter, while the other was six days younger.

In 2015, a singleton cub was brought in for a cross-foster, but it arrived with too many health issues and did not survive. Ahistus did say the mother “Gracie” was very attentive to do the best she could.

“Even though it didn’t work out for us in 2015, being part of that process did help us prepare this time,” Ahistus said. “A cross-foster was done at the Cincinnati Zoo in 2016 and there have been several fostering successes over the years, but it is not a tool we get to utilize very often. You have to have two litters born in a narrow time frame, but with the communication among breeding centers now, we all know when litters are due around the country, which at least potentially opens up the door. We only do this if a mom gets stuck with one cub or if she can’t raise the cubs she has for whatever reason.”

This was significant experience for Sharkey, who is in her first year at Fossil Rim and had previously been part of one successful cross-foster at White Oak Conservation in Florida.

The hero, or heroine, in all of this is truly Charo.

“I’m proud that Fossil Rim is a part of this, but also more excited for the cub and Charo,” Ahistus said. “She has proven to be an amazing mother. If the situation arose in the future with a different litter of hers, we’d do it again in a heartbeat.

“With each cross-foster attempt in the SSP, we learn more information about what will and won’t work, which helps increase the success rate. We are at a point now with the Cheetah SSP and Cheetah Breeding Centers Coalition that when we get in a situation where cross-fostering is needed, the facilities involved do what they can to try and make it happen for the benefit of the cubs involved.”

Ahistus anticipates Charo and her cubs may be visible on guided tours by late July. Until these beanie babies are 18-24 months old, they will live with Charo as an encouraged, proud staff takes care of them all.