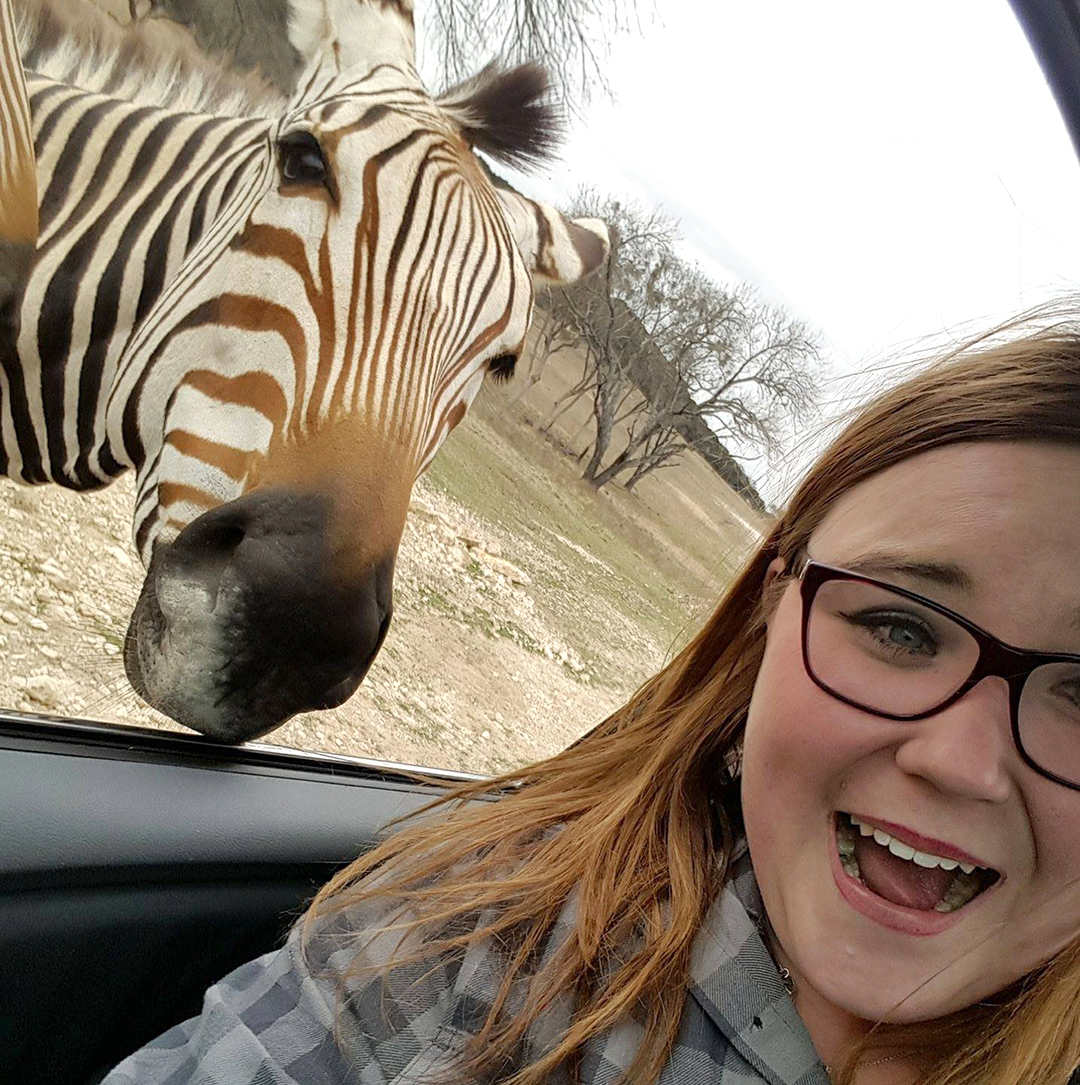 I have only been in existence for a short time relative to the universe, but I have always been driven by my own sense of commitment to making the world a more wonderful place for all its inhabitants. I am filled with a sense of duty to do the most good possible in my time here on Earth. I may only be one person, but all it takes to ignite change is the faintest spark of passion.

As Dr. Seuss wrote in his children’s book The Lorax, “Unless someone like you cares a whole awful lot, nothing is going to get better. It’s not.”  It was my own passion— my desire to leave a positive mark on the planet—that ultimately led me to Fossil Rim Wildlife Center.

In Dec. 2016, I graduated from the University of Illinois at Urbana-Champaign with a Bachelor’s of Science in Natural Resources and Environmental Sciences (NRES), and a concentration in Human Dimensions of the Environment. The Department of Natural Resources and Environmental Sciences at the University of Illinois website defines human dimensions of the environment as “the study of human-environment interactions at the individual, household, community, regional, and global levels.” I decided that I wanted my academics to focus on the interactions brought about by environmental education, by social media, and by the portrayal of the environment in mainstream films and documentaries. I wanted to change the way people view the environment, and I wanted to do it through education.

That is exactly what happened with my professional goals. They evolved. Personal growth occurred, and I could not be happier about it.

One of the duties required of interns at Fossil Rim is the completion of a unique intern project. This project is meant to be a tangible representation of your time spent here, plus be a way to leave your unique mark on an already incredible establishment in the wildlife conservation industry. I spent the 15-hour drive from my hometown in the northern Chicago suburbs to Glen Rose brainstorming ideas, but none of them seemed to stick. However, it wasn’t until the first time my mom and I drove through the wildlife center that I knew exactly what I wanted to do for my project.

Fast forward about four or five months to today. It is June 16, and I have nine days remaining in my internship. I am not sitting at my desk in the Education Department. Instead, I am sitting in the administration building, and I am working directly alongside members of the Marketing Department. How did I get here? What was the factor that influenced me profoundly enough to facilitate such a drastic change in my career goals? Short answer: my intern project.

When I drove through the park that very first time in early February, I decided that I wanted to share pictures of the majestic endangered species that Fossil Rim has spent years working diligently to save and conserve for future generations. Fulfilling the stereotype of the millennial generation of which I am a member, I took out my phone and chose to broadcast what I was experiencing on social media. One by one, I opened up all my social media applications and began sharing pictures.

Facebook, Instagram, Twitter—I covered all my bases. No social media site would be left un-spammed. All my friends, on all social media applications would see what an incredible time I was having. Then, I had a realization that changed everything. I forgot about Snapchat!

Excited, I opened up the application eager to share all my pictures with an iconic, location-based geofilter specific to the park. I took my first picture, began swiping through the filters, but found that there was not a single geofilter anywhere within the boundaries of Fossil Rim! I hurried to open up the Fossil Rim website to see with which social media sites and applications the park was associated.

I was astounded to learn that despite having a presence on the major social media websites, Fossil Rim was not on Snapchat! The application caters to such a distinct age demographic. Establishing a presence on it would be an extraordinary marketing opportunity, and would allow people to communicate and interact with the facility in a manner previously unavailable. In this exact instant, I had an epiphany and discovered my intern project.

Initially, I intended to focus more on the geofilters. However, as my time at Fossil Rim progressed, so did my project. I communicated directly with the marketing department, and spent several afternoons in May shadowing departmental employees.

A project that began as a tool to create geofilters and broadcast interesting facts about the wildlife has grown into a marketing tool to notify our Snapchat connections about park-wide events, a way to advertise events directly related to the Education Department, a direct way for guests to share with us the photographs they take inside the park, a promotional tool for our very recently developed Snapchat Animal of the Month (June is Giraffe Month, so submit your pictures and we’ll put them in our story), a platform to celebrate the achievements of important conservationists by discussing these accomplishments on their birthdays, and a way to commemorate national and international wildlife holidays.

This one project made such a lasting impact on my career goals. I am leaving Fossil Rim on a different path than I was when I arrived. Now, instead of a career in environmental education—which is essentially just creative marketing of knowledge and information—I am applying for marketing positions with the African Wildlife Foundation and the National Geographic Society. Through this internship, I have realized my true potential and became consciously aware of how I can use it to make a positive change and leave my mark on the world. For this, I could not be more grateful.

5 thoughts on “Education intern learns marketing is her true path”