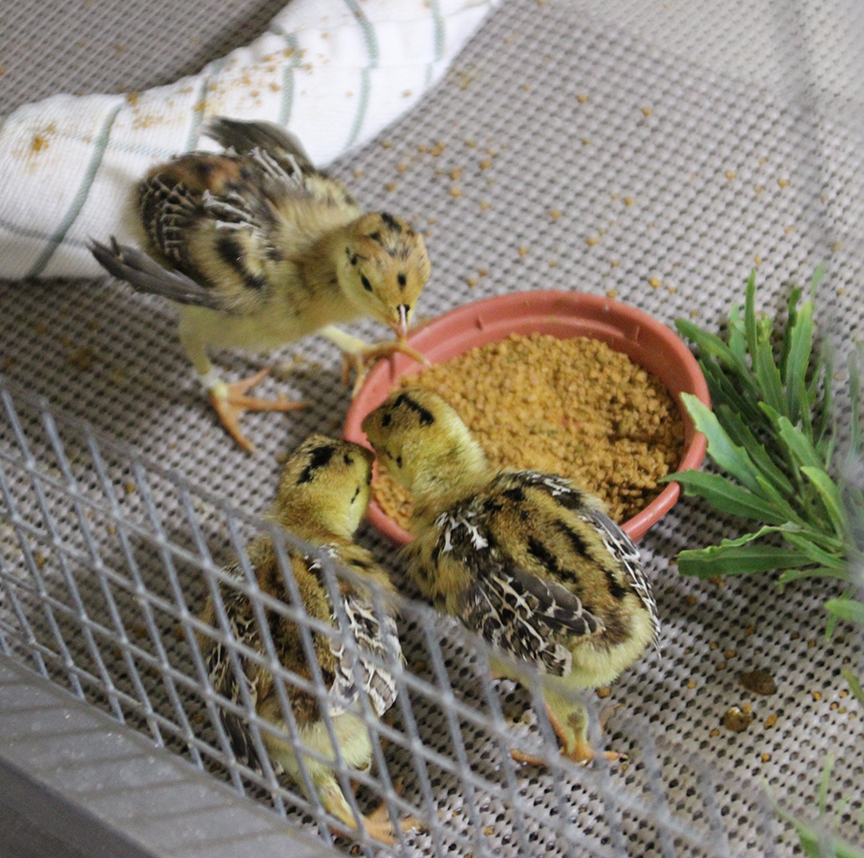 Each spring, the avian facility within the Intensive Management Area at Fossil Rim Wildlife Center is bustling with activity.

After all, it’s “chick season” for Attwater’s prairie chickens. This native Texas species is highly endangered, so every single chick is of the utmost priority to Fossil Rim staff.

For most of the year, Senior Avian Care Specialist Cara Burch and Avian Curator Janet Johnson hold down the fowl fort by themselves, but right now they have a trio of interns and Animal Care Specialist Molly Shea, who works for the hoofstock department most of the year but transitions to avian care for several months. This is the only case each year where three interns are required by one department, due to the volume of work to be done.

“Everything is going well for us this year, but we are a little ahead of pace,” said Burch.

“The hens started laying eggs earlier this year and all at once,” Shea said on an afternoon where Burch was giving the interns guidance. “So, the first chicks came a little earlier. You just have to be ready each year because you can’t predict the exact timetable.”

The eggs begin their journey in incubators and then are placed into hatchers as the hatching point draws near. With Plexiglass doors and a temperature-controlled environment, the hatchers allow close monitoring of a chick’s progress coming out of an egg, which will conclude a 26-day incubation period. After the hatchlings get a chance to recover from the exhausting hatching process, they are transferred to the chick rearing building and placed in brooders, where they are closely monitored.

From there, the chicks transition into stacker cages. In a room full of cages, most cages have chicks grouped by how many days old they are, but some have mixed ages.

“They progress through different cages as they continue to grow,” Shea said. “We will mix up the days of age if younger birds are thriving, or if older birds are behind in their growth. Each day for the first two weeks of their life, every chick is weighed and inspected to ensure they are in good health.”

If a chick is posing a danger to others, it is moved to a cage where it can still hear and see other chicks, but unable to continue the potentially harmful behavior.

Once a chick reaches the weight threshold of 50 grams, it is moved on to an outside pen as it continues to grow and develop while awaiting shipment to the Attwater Prairie Chicken National Wildlife Refuge in Eagle Lake, Texas. Also, some chicks are recruited into the ex-situ population as replacement breeders, depending on genetic and demographic needs of the population.

Meanwhile, hatching is expected to continue until mid-June. In July, the first of six shipments to the refuge will occur.

To learn more about this process earlier in the spring, check out http://fossilrim.org/2017/04/18/eggs-are-the-spring-story-for-apcs/. To learn more about Attwater’s prairie chickens in general and see where they live at Fossil Rim, you can visit our Jim Jackson Intensive Management Area on a Behind-the-Scenes Tour. Call 254.897.2960 for reservations.

If you would like to make a donation specifically to our Attwater’s prairie chicken program, please contact info@fossilrim.org.