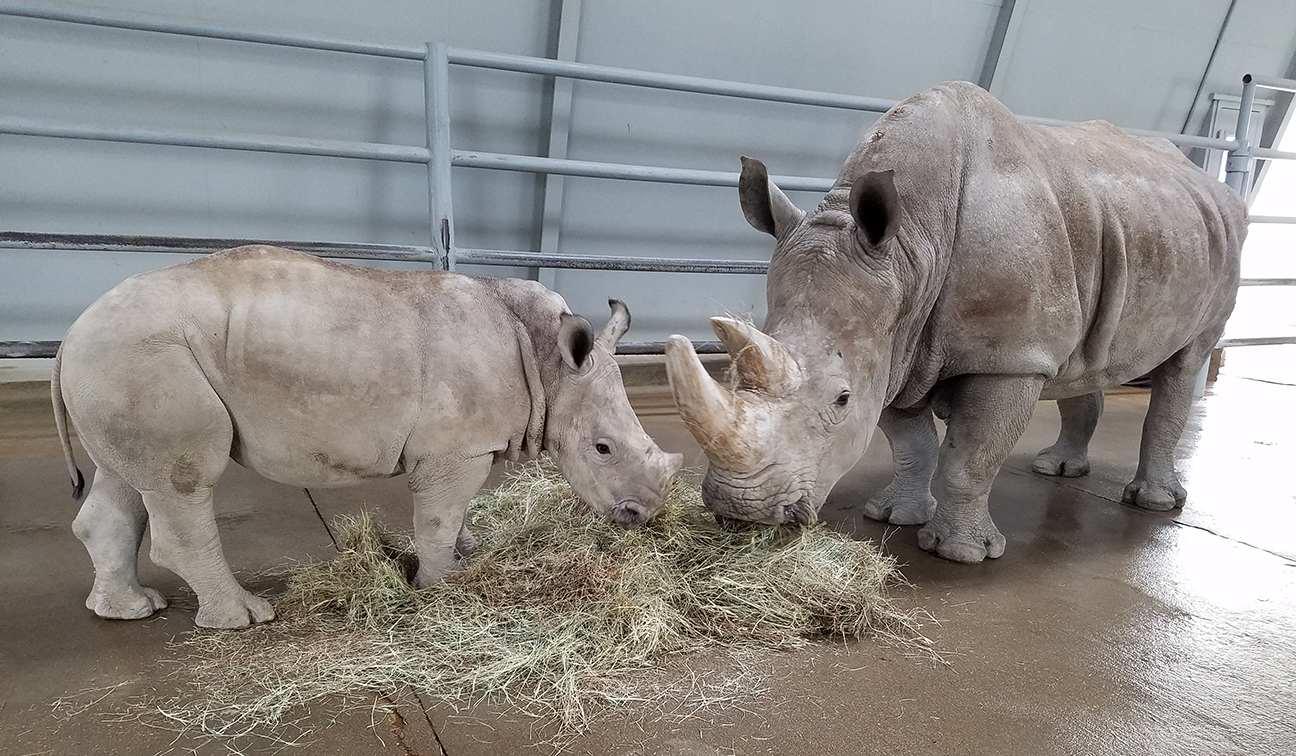 Shortly after he was born to “Ursula” on Dec. 4, 2016, it became clear that the latest southern white rhino calf at Fossil Rim Wildlife Center would be encountering some adversity early on in life.

A first-time mother, Ursula’s maternal instincts did not kick in – which is not uncommon for the species. Justin Smith, Fossil Rim’s lead rhino keeper, and his fellow staff members quickly realized they needed to take action.

“I don’t know if he was ever in danger (from her), but Ursula definitely wasn’t friendly or responding as a nurturing mother,” Smith said. “Once it was obvious she had rejected him, we were cautious and made sure the calf’s interests were at the forefront of our minds.”

Smith recalled the intense hours and days that followed regarding the welfare of the 140-pound neonate.

“Your biggest hurdle is getting him through the first 24, 48, 72 hours,” Smith said. “From there, you just build on it. It was very intense early on. During the calf’s first night, (hoofstock curator) Adam (Eyres), (director of animal health Dr.) Holly (Haefele), (COO) Kelley (Snodgrass) and I were all on property until well after midnight trying to make sure he got as much colostrum in him as possible. Once he got closer to a month old, we could start taking a few breaths.”

This calf is the first hand-reared rhino ever at Fossil Rim. The staff had to count on rhino milk replacer to nourish him.

“You can never replace a mother’s milk,” Smith said. “If we could’ve milked Ursula every day, we would’ve tried, but that wasn’t an option. We made the best of the situation with formula.”

The calf spent nearly two months living at the animal health clinic, learning to run and wallow in a grassy pen outside when weather permitted.

“We set ground rules right away so that a very small group of staff would be the only ones working with the calf,” Smith said. “He was cute and cuddly at birth, but it wasn’t long before he was much bigger and could really hurt somebody. So, we never allowed horseplay with him. If he’s aggressive to you – you walk out; that was always how we operated.

“He knew humans brought him food, but he was never so attached to a human that he absolutely needed us at all times. People often watched him, but weren’t sitting with him 24-7 once he cleared the early stages of life.”

At about one month old, the calf was joined by “Angel,” a LaMancha goat from Fossil Rim’s Children’s Animal Center.

“His role wasn’t how we foresaw it working out, which would have been hanging out as friends,” Smith said. “They were more like acquaintances or neighbors who kept each other from feeling alone.”

When the calf eventually relocated to a pen in the white rhino barn, Angel continued to live with him for more than a month before returning to the Children’s Animal Center. Meanwhile, the calf began to see much larger creatures on a regular basis.

“He was born in the winter, so our white rhino barn wasn’t nearly as warm as what he needed to sustain his body temperature,” Smith said regarding the calf’s initial living arrangement at the clinic. “The first time he saw an adult rhino – since he’d been a newborn – was nearly two months later. He was startled when it walked into the pen next to him. He was the biggest, baddest thing on the planet (at the clinic), as far as he was concerned, but when he saw an adult rhino he realized he was just a small fry.”

Shortly after the calf reached three months of age, he was introduced to the adult female rhino, “M’Bili.” As opposed to seeing an adult on the other side of a fence, the calf was now in with an adult.

“We chose M’Bili for a reason,” Smith said. “She’s had multiple calves here, so we knew she would know how to act around this calf. She’s generally a patient rhino. The calf was standoffish and a little frightened at first because of their size difference, but she has been very tolerant.”

Smith talked about the gradual progression of their bond.

“From the first day they were introduced to a week in, he was still standoffish,” he said. “But slowly, that gap between them started decreasing. When he was already lying down, M’Bili intentionally laid closer to him and vice versa.”

The staff was thrilled each time it witnessed new evidence of the growing comfortability between the two.

“In terms of behavioral traits M’Bili shows toward the calf, they are (maternal),” he said. “She calls him over, and he calls her. She’ll go over to him if he’s frightened, plus they lay side-by-side and touching, which is all exactly what we want. Sometimes, he can be a pest and push her buttons, but she takes it in stride.”

The calf that once weighed less than some of the people giving him bottles of formula is now approaching 700 pounds, as he gains 20-25 pounds per week. He consumes 40 liters, or about 10.5 gallons, of formula per day. He is also transitioning to solids including feed pellets and coastal hay.

When he recalls the past few months, Smith is so proud of the team effort on behalf of the calf.

“It’s very rewarding seeing the calf get adopted by another rhino, and to see M’Bili take on a motherly role,” he said. “I think of all the hard work put in by the vets, animal care staff, interns, volunteers and vets from other facilities we’ve reached out to for guidance. Facilities like San Diego (Safari Park) and White Oak have done this before, so it made sense to ask for help.”

Many Fossil Rim fans are undoubtedly wondering what is next for the big boy, as he continues to become more comfortable in his own gray skin.

“His next major hurdle – we are retrofitting the bull pen (beside the white rhino yard) so that he can be out there visible from the Scenic Wildlife Drive, as well as near a bunch of different animals (living in the Front Pasture),” Smith said. “He’ll continue to live with M’Bili for approximately one year. He will likely remain in the bull pen until he is old enough to transition to the white rhino yard with the rest of the crash.”

Even in a nurturing environment like Fossil Rim Wildlife Center, some of the animals will be faced with hardships at one point or another. But with the efforts of a diligent, knowledgeable and cohesive staff, they can emerge from the adversity and thrive to the benefit of their species.