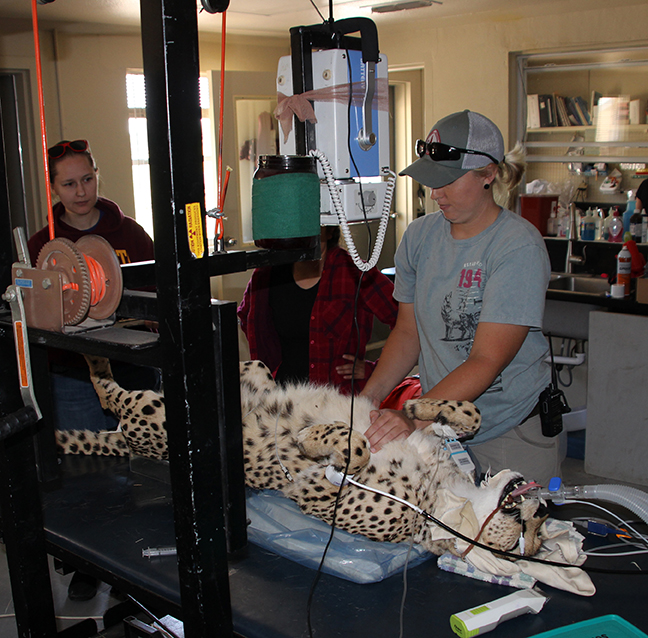 Veterinarians Dr. Julie Swenson and Dr. Holly Haefele, as well as veterinary technician Brenda Cordova, need to take a proactive, preventative approach so they can address issues an animal might have as soon as possible. On this particular spring morning, the female cheetah “Jesiri” was being evaluated before the 1.5-year-old cat leaves in early May bound for another facility.

“We are getting a breeding female from the same facility, while Jesiri will go on exhibit for them,” said Alex Sharkey, Fossil Rim cheetah care specialist.

“We usually try to do a final health exam within 30 days of an animal shipment,” Swenson said. “We may do a visual exam before she leaves and reference this bloodwork.”

Early on in the exam after the sedated cheetah was carried into the clinic and removed from her transport crate, Jesiri received a cuff on one of her front legs with “5” on it.

“The number is the size of the blood pressure cuff, which differs according to the size of the animal limb,” Swenson said. “If you don’t use the correct size cuff, it can make your reading inaccurate.”

A probe was placed on the cheetah’s tongue to allow monitoring of the oxygen saturation of her blood.

“We have these animals under anesthesia, and one of the biggest side effects to the drugs we use is respiratory depression,” she said. “It’s especially true of opioids, like the combination this cat received, so we need to make sure she’s breathing deeply and regularly. How well she is oxygenating her blood helps us with that information. The tongue is a good place to check that – there is no fur to get in the way of the sensor and the blood vessels are very close to the surface.”

Swenson also pointed out a nearby “rebreathing bag,” which allows staff to assist with improving respirations if needed.

Meanwhile, Cordova initially took a blood sample from the neck and then transitioned to a back leg.

“The location just depends on where you get the best blood pull from,” Swenson said. “Cheetahs have very fuzzy necks, so their jugulars aren’t always easy to hit. It’s a matter of personal preference as to which (blood draw) site you like.”

As Swenson progressed through the exam, she was able to discuss everything that was happening with Karen Plass, a vet preceptee (fourth-year veterinary student).

“If any of the vet staff needs to really concentrate on something, we just tell the other people with us and they will hold their questions,” Swenson said. “For example, if I’m pulling up dangerous drugs, they know that and don’t get offended by it. For a procedure like this, I trust Brenda and I know she’s monitoring levels, and I know our (preceptee) is, too. That takes some of the effort off of me so that I can focus on other things, as well.”

Cordova did a dental cleaning, but Jesiri’s teeth were in great condition beforehand.

“That’s an ultrasonic scaler we use, and it also has a polisher,” Swenson said. “It’s exactly the same type of machine as what a dentist uses on a human. Those were beautiful cheetah teeth – mainly because she’s so young.”

Swenson discussed a wire that was clipped to the top of one of the cheetah’s hind legs.

“That’s an EKG lead; there are two on the front legs and one on a hind leg,” she said. “It assesses the electrical activity of the heart by giving us a standard wave reading of heart rate and rhythm. This is another case where the drugs we give them depress the cardiovascular system, so we must monitor it.”

“When the blood pressure cuff inflates, the pressure on the limb causes the paw to move,” Swenson said. “If she were actually moving it on her own, that would be a concern.”

In front of the exam table, there is a small machine below two bags of IV fluid.

That’s a fluid pump,” Swenson said. “It allows us to set the rate of fluid she gets through her IV line.”

There is a monitor on top of the anesthesia machine that gives several different readings.

“It tells us a lot of things,” she said. “It’s an anesthetic monitoring machine, which tells us her oxygen saturation, heart rate and rhythm, how much carbon dioxide she’s expiring when breathing, her body temperature using a thermometer in the esophagus, respiratory rate and more.”

The exam then shifted to X-rays, as Swenson took and examined numerous images.

“We’re looking for any obvious abnormalities in the X-ray, so we know if we want to focus on something in particular,” she said. “We try to make sure our technique and positioning were good on the X-ray. Is there anything that gives us a hint there might be a problem internally? She’s a young cat, so everything looks great on her, plus she isn’t old enough to be pregnant.”

Eventually, Swenson and the staff rotated the cheetah onto its back for further X-rays.

“An X-ray is a two-dimensional image, and we want a three-dimensional picture of what’s going on,” she said. “In order to do so, we need to use two images – hence the reason we rotate the cheetah onto her back for further X-rays.”

For each X-ray, Swenson stood behind a barrier and looked through a clear panel as everyone else exited the room.

“That’s a radiation blocker, so I’m close enough to use the handheld trigger, but not getting exposed to radiation,” she said.

Next, Swenson utilized the clinic’s ultrasound machine, which was a gracious donation from a Fossil Rim supporter.

“That’s our fancy ultrasound machine,” she said proudly. “Our previous ultrasound machine works, but the image quality is poor. This technology changes extremely fast – almost too fast and too expensive for a nonprofit (organization) to keep up with via upgrades on a regular basis. So, generous donations like this one, and the ones that allowed us to get the anesthesia monitoring and digital radiograph machines, are extremely helpful for allowing us to have the highest level of medical equipment.”

She read dimensions from an ultrasound image to Plass and then explained why.

“One of the common problems in cheetahs is kidney failure, so if we can get a baseline for how big each cat’s kidneys are, it’s very helpful,” Swenson said. “You can have two main types of kidney failure – acute or chronic. For acute, the kidneys suddenly get larger.

“For chronic, they get smaller. Then, if she starts to show evidence of kidney disease later on, we can remeasure and get an idea of what disease we’re looking for.”

Continuing to blend education into the exam, Swenson went over the ultrasound images with Plass.

“I make sure she is seeing what she needs to be observing, and I answer any questions,” Swenson said. “The ultrasound is especially good for checking out soft-tissue organs – liver, kidneys, spleen, intestinal motility, contractility of the heart, bladder, gall bladder – essentially anything in her chest and abdomen we can see. It just isn’t ideal for examining her lungs, but X-rays are much better for that.”

When the exam was over, the cheetah was placed back into her transport crate. The process to bring her out of anesthesia happened rapidly.

“Karen gave her reversal injections and I was extubating her once she was able to swallow,” Swenson said. “You often have to get that done quickly, so be prepared for it.”

Vet and cheetah care specialist alike were pleased with Jesiri’s status as she prepares for transport to her next home.

“She went down really easily (during anesthesia),” Sharkey said. “There were no issues, so we’re pleased about that.”

“This was a general exam, so we looked at everything we could,” Swenson added. “As far as we know, she’s totally healthy and looks great.”