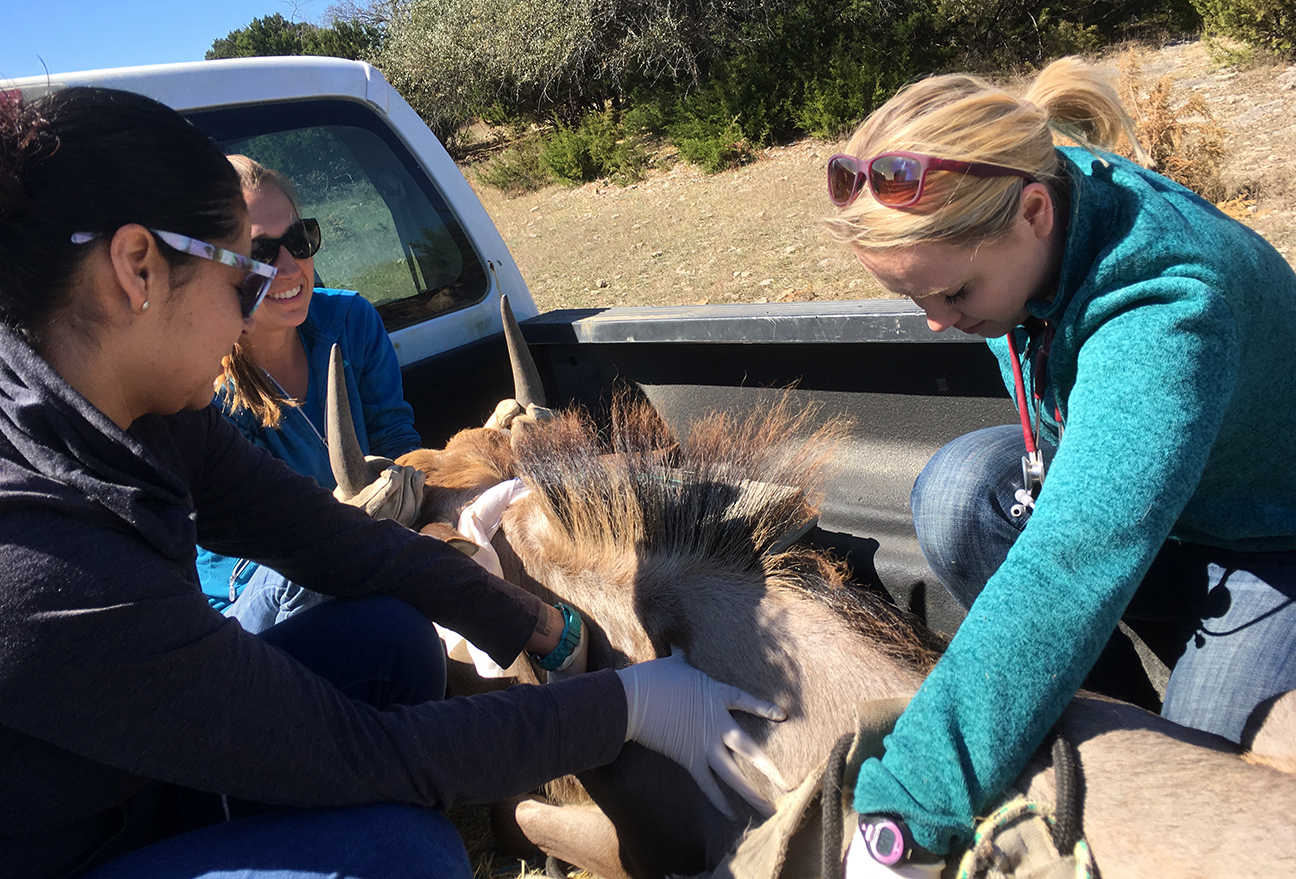 Becca Richardson had previously visited Fossil Rim Wildlife Center and knew she was interested in a veterinary preceptorship at the facility, but it proved to be even more beneficial than she had envisioned.

After earning her bachelor’s degree in animal science from Angelo State, Richardson headed to Texas A&M and is set to earn her doctorate in veterinary medicine in May. A native of Andrews, Texas, Richardson recalled her past visit to Fossil Rim.

“I came on a trip with some of my classmates from our local wildlife disease student chapter, because one of the girls had done an externship here before and knew (the veterinarians),” she said. “We drove through the park, got to see the vet clinic and learned about the (preceptee) program. That was my first time to visit, but I’d heard a lot about it from my friend beforehand and knew what to expect.”

Richardson was a vet preceptee at Fossil Rim from Feb. 6 to March 24.

“I didn’t realize we’d get to work with the carnivores as much as we did – including several cheetahs and a wolf,” she said. “I was expecting it to be more geared toward hoofstock, because of what I’d seen on my earlier visit, but I absolutely loved it.”

When it came to memorable moments, Richardson referenced an animal that Fossil Rim followers are becoming more familiar with.

“Bottle feeding the (white) rhino calf will be a memory that never gets old,” Richardson said. “Who gets to do that? I was also there the first time he was introduced to another rhino, which was really neat.

“A lot of the (animal) capture stuff was really cool, specifically the days we spent capturing wildebeest. (Associate Veterinarian Dr.) Julie (Swenson) was darting them from a tree, since they were getting wise to the truck.”

Richardson also pointed out an animal she helped overcome adversity.

“The scimitar (horned oryx) bull was definitely my favorite animal,” she said. “He got pretty sick, but we were able to help him recover and feel well again. We worked with him every day.”

Like many preceptees, Richardson enjoyed working alongside Swenson and Dr. Holly Haefele, director of animal health, on a day-to-day basis.

“They are just so incredibly knowledgeable,” she said. “Just sitting and talking with them for a day – you learn so much. They talk about past experiences and what they’ve done; it’s so valuable. People at school don’t tell you how to work on a rhino.

“Holly and Julie treated me like a colleague and genuinely asked for my opinion, which I really appreciated.”

The day before her time at Fossil Rim ended, Richardson gave a presentation to staff, interns and volunteers about leptospirosis.

“It’s a widespread zoonotic pathogen, so both humans and animals can get it,” she said. “It can affect both our wildlife species and domestic pets. I talked about how it is contracted, the source, plus how people can protect themselves and their animals.

“It can be fatal, but there are vaccines for domestic animals. Nearly every Fossil Rim species except felines are susceptible.”

“After Fossil Rim, I return to school and graduate; then I have a job in Bandera, Texas at a mixed animal practice,” she said. “While I was at Fossil Rim, I traveled down there for an interview and got the job. It was reassuring to get my plans set.

“Instead of focusing on my job search, I could concentrate on everything that was happening here. I will be an associate veterinarian working with all sorts of domestic animals, but since this will be in the Hill Country in the middle of so many game ranches, there is the potential for exotic species work.

“I didn’t know if I’d be able to find a job working with exotics, but I knew before I got here that I was interested in that. It’s the big reason why I came to Fossil Rim.”

Speaking of associate veterinarians, Richardson will always remember the investment Swenson made in her.

“The whole time I was here, Julie really taught me how to approach things I’d never seen before,” Richardson said. “If there’s a species you’ve never worked on before, how do you go about using what you do know and extrapolate that into a solution? That will be incredibly useful, and I’m thankful Julie put so much time into helping me.”

Whether prospective preceptees or general first-time visitors are considering a trip to Fossil Rim, it is a slam-dunk decision, as far as Richardson is concerned.

“Where else are you going to get this kind of experience?” she said. “I was really a part of what we did here.

“If people will come take a tour through Fossil Rim, it’s a memorable experience. You see animals native to Africa up close as they approach the vehicle. I think it’s important for people to realize where the money they spend at Fossil Rim is going.

“They do a lot of research and breeding of endangered animals. This place isn’t just a drive-thru safari.”