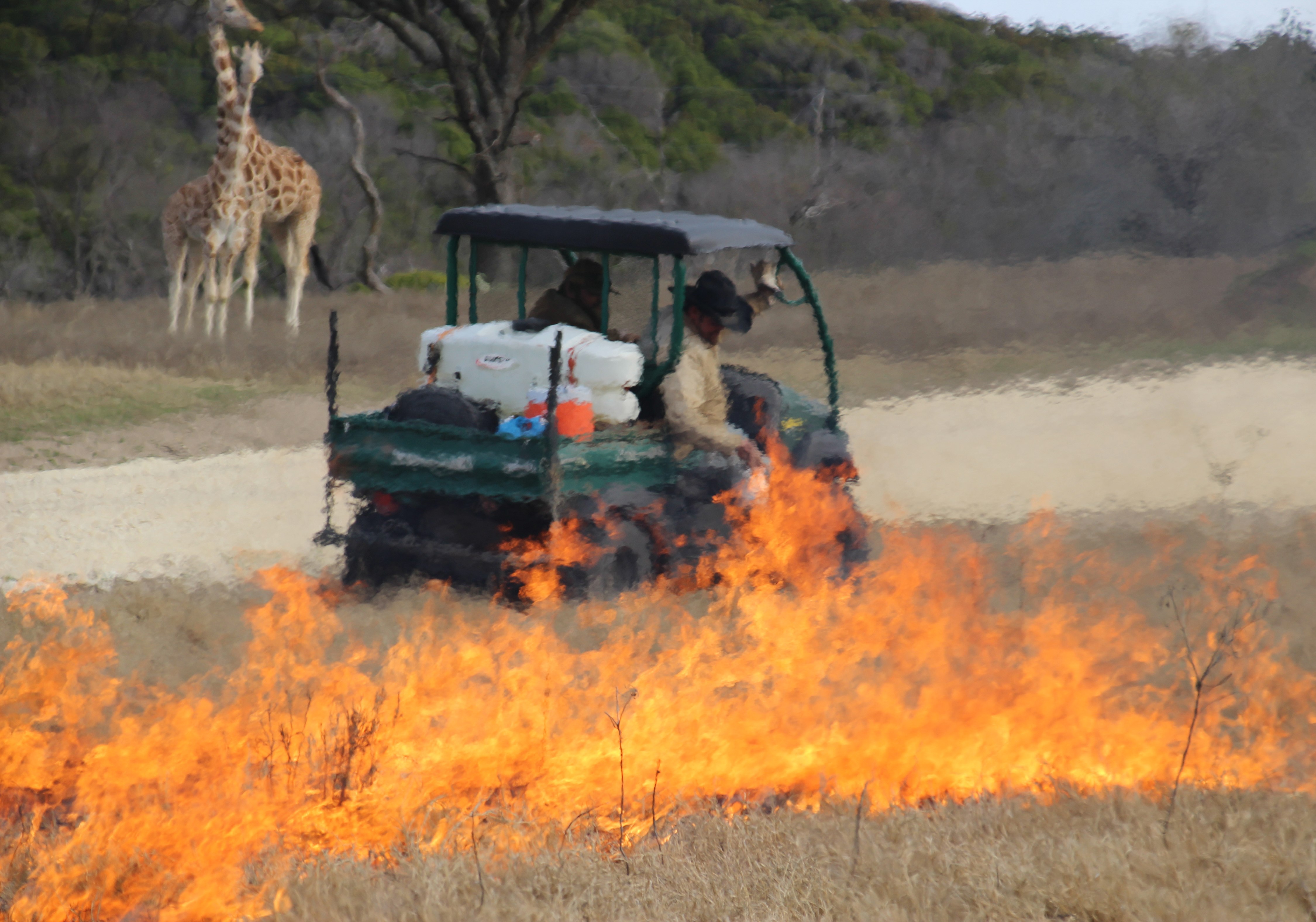 On the surface, intentionally setting fires in a park with roughly 1,100 animals may seem unfathomable.

Digging deeper, however, it is likely to be of great benefit to both the landscape and wildlife.

At various times each year when conditions are right, Fossil Rim Wildlife Center Agriculture Resources Manager Daniel Branham and Senior Grounds Maintenance Technician Trent Sandlin begin the process of prescribed burning in the various animal pastures. By definition, a prescribed fire is “the knowledgeable and controlled application of fire to a specific land area to accomplish planned resource management objectives. These fires are managed in such a way as to minimize the emission of smoke and maximize the benefits to the site.”

“A lot of our guests may not have any idea what’s going on when they see a burned pasture, and how important it is that we’re using fire as a tool versus it always being bad,” Branham said. “In 2016, a lady asked me why we were killing the grass. We certainly don’t recommend anyone trying it on their property without proper training, but that’s one of the reasons I think it’s important to share what we are doing.”

It is actually nothing new for the duo to utilize prescribed burning at Fossil Rim; it is where they are doing it that is the key.

“We have burned hay fields in the past, but I believe (2017) was the first time in 22 years we did prescribed burns of animal pastures,” Sandlin said.

Branham said the ideal months for prescribed burning are February and March, but that January and April are acceptable, as well. Before they decide to begin, there are numerous considerations.

“There obviously can’t be a burn ban in effect, plus we need sufficient burn fuel and acceptable wind speed and direction,” Branham said. “It is recommended that you have 1,200 pounds of dry forage per acre. We want winds of 5-10 mph and you have to have some wind, but wind direction might dictate what pasture we could burn that day based on the neighbor’s property.

“If a fire did get out of control, where is it headed? But, the key is to create a fire we can control.”

The weather forecast always factors in.

“As long as the ground is dry and the humidity is not too high, the fire should be effective,” Branham said. “It may force us to wait until the afternoon sometimes, such as the mornings when you get to work and the vegetation is covered in frost. Also, we really like for it to rain the day after, which prevents the ashes from blowing away and instead puts them into the ground.”

Once the conditions are deemed appropriate, there are still other items on the checklist.

A handheld drip torch is the most commonly used ignition device for prescribed burning. It allows burning fuel, in the case of Fossil Rim – kerosene, to drip onto vegetation in the desired burn area.

“The day of the burn, we call the sheriff’s department and (adjacent) High Hope Ranch to let them know,” Branham said. “Lastly, we continue to watch the weather, which is the biggest thing.”

It would be fair to say Branham was formally trained on prescribed burning.

“I was on the Brazos Point Volunteer Fire Department years ago, and that’s actually how I learned to do prescribed burns,” he said. “A lot of times when fighting a big fire, we would do a prescribed burn to put it out ahead of the main fire.”

Back burning and the resulting firebreaks are methods to keep a fire controlled. Back burning, which actually progresses against the wind, is used so there is little material left to burn when the main fire – or headfire – reaches the burnt area.

Firebreaks are often used as an anchor point to start a line of fires along natural or manmade features. The key is a firebreak must stop a headfire and contain it within the burn area.

“For example, when we burn next to our admin road, if the wind is supposed to be out of the northwest, we will burn the northwest side of that field in a line about 10-12 feet wide bordering the area we don’t want to burn,” Branham said.

“That initial fire on the border is so small it can be easily contained before you burn the bulk of it,” Sandlin added.

They do have options when mapping out a given plan.

“This borderline can also be created by plowing, or using a road grader or other ways instead of fire,” Sandlin said. “Roads are a natural border, so in some cases we don’t have to create one. But we always have some sort of firebreak when we are next to an important area we don’t want burned.”

While the pair is sometimes comfortable performing a prescribed burn on their own, it comes down to the magnitude of the task.

“Trent and I can handle it when we have firebreaks all around the area to be burned,” Branham said. “If it is an especially large area, up to 4-5 people is more ideal. Then, you have two people to light the fire and two people on the firetruck. That’s enough, at least for the size of the burns we do, but we try to have people on standby to help if needed.”

With 100-plus Fossil Rim employees and more than three dozen regular volunteers, Sandlin pointed out there are nearly always other people nearby regardless.

Fossil Rim Executive Director Kelley Snodgrass explained to the facility’s staff several reasons the burns would be beneficial. For one, prescribed burns release nutrients into the soil, which stimulates forage regrowth.

“One reason I’ve always liked to burn the coastal (hay) fields, and now animal pastures, is it puts nitrogen back into the soil through the ashes, plus it leaves that area nice and clean,” Branham said. “In hayfields, we can make square bales on the first cut most of the time because there isn’t much (undesired vegetation) in there. Also, black soil will heat up faster, so the grass will come back sooner if we are going through a cold winter.”

A couple of closely associated prescribed burn points Snodgrass made were “it helps control unwanted brush and weed encroachment,” as well as “it helps clean up the pasture by making more uniform and nutritious forage available for the grazing animals.”

“The grass will come back thicker and stronger, so it will choke out a lot of the weeds and such that you don’t want – if we get good rain after the burn, of course,” Branham said.

The other benefit Snodgrass referenced is of particular interest to Dr. Holly Haefele and the Fossil Rim Animal Health Department: “It helps to control internal and external parasites that affect many of our grazing animals.”

“Compared to a normal Texas rancher, I believe this is much more of a factor for wildlife parks,” Branham said. “I don’t think we’ll ever eradicate all parasites, but I think it will help. Our sable herd, in particular, could really benefit from this burn in the Main Pasture.”

Fossil Rim pastures may need a prescribed burn for differing reasons, but Sandlin is a believer in the process.

“In one pasture, parasites can be more of a concern than the other,” he said. “In another pasture, the prime reason can be controlling the brush and weeds. To me, this is the most natural thing you can do to a field to improve it. In (Somervell County), I’ve seen more people using prescribed burning in the last several years than the previous 20, because I think the awareness of the benefits is growing.”

The pastures allow the wildlife to move away from the flames and smoke, but they are able to observe the burning if curiosity strikes. However, it is difficult not to notice that a particular species seems to enjoy a scorched pasture.

“(Director of Animal Care) Adam (Eyres) said it is well-known in Africa that addax love an area after it has been burned,” Branham said. “(Tours Manager) David (Whiting) also told me that addax enjoy going to a recently burned area because the ashes are a source of sodium for them.”

While some other Fossil Rim species may have their concerns about pasture fires and are not able to read up on the matter, they are liable to enjoy lush, nutritious forage as a result in the months that follow.