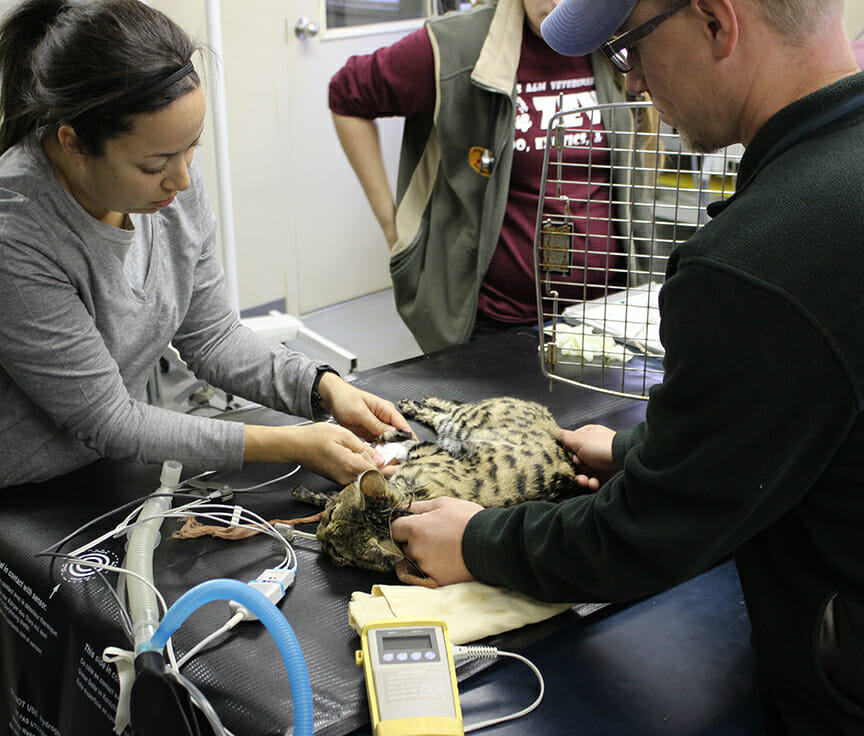 A very small animal was at the center of attention in Fossil Rim Wildlife Center’s animal health clinic the morning of Nov. 21, and it was a very big deal.

Fossil Rim’s male black-footed cat, “Morgan,” was the subject of an electroejaculation procedure performed by reproductive specialists visiting from the Cincinnati Zoo.

“The main project we are working on now is funded by a grant from the Institute of Museum and Library Services (IMLS),” said Dr. William Swanson, the zoo’s director of animal research. “It’s designed to help zoos manage their animal collections, so part of our main focus is banking (freezing) semen from valuable males of five small cat species, including the black-footed cat. Also key to this project is that with the frozen sperm, we’re doing artificial insemination procedures to try to move genetics between institutions without having to move live cats. We’re even collecting semen from European zoos and bringing it to the United States to aid small cats that aren’t breeding naturally.”

Dr. Anneke Moresco, a veterinarian doing postdoctoral research at the Cincinnati Zoo, joined Swanson on his trip to Fossil Rim to assist with the collection and banking.

The black-footed cat is the smallest of the five species addressed in the study, as Morgan weighs only 4.8 pounds. There are also species a bit larger – sand cats and Pallas’ cats – as well as species larger still – ocelots and fishing cats. Fossil Rim had resident ocelots in the past.

From the Fossil Rim perspective, there was definitely incentive to have Morgan participate in the project.

“Morgan was chosen as a candidate to collect sperm from because he hasn’t bred yet, so his genetics are underrepresented in the black-footed cat population,” said Jason Ahistus, Fossil Rim senior animal care specialist – carnivores. “We had hoped our pair of black-footed cats at Fossil Rim would breed naturally. Morgan and the female, ‘Latika,’ had been paired together for more than 18 months and had not bred successfully, so the SSP (Species Survival Plan) coordinator suggested we work with Dr. Swanson and try artificial insemination.

Swanson pointed out a side study within the project conducted by the Cincinnati Zoo, as well.

“We are looking at what is the best way to freeze black-footed cat sperm?” he said. “The traditional method uses a media with egg yolk in it. The problem with egg yolk is that every egg is different.

“So you get a lot of variation, which affects your media. It can also carry infectious disease, such as avian influenza or a bacterial disease.”

Fortunately, an alternative media has emerged.

“We have developed another media that has a soy protein instead of egg yolk,” Swanson said. “It works really well for domestic cat and ocelot samples, but for every species in this study we have to verify that the soy is going to be as good as the egg yolk for freezing the sperm. With the black-footed cats, we’re freezing half of the sperm in soy and half in egg yolk. We’re going to see how they survive when we thaw them out.

“The soy will definitely be an improvement in regard to potential for infectious disease, plus it won’t have the variations of egg yolk. So, in terms of preserving the sperm, we just need the soy to be as effective as the yolk.”

The soy media is also superior in another respect.

“Finally, it is also a lot easier to travel internationally using the soy because I don’t have to explain to agricultural officials at the airport why I’m bringing a poultry product into the United States from another country,” Swanson said. “They are concerned with the potential of spreading avian influenza.”

Fossil Rim is not the only American facility with black-footed cats, so Swanson explained why its inclusion was important from his standpoint.

“We work with the SSP coordinators, and they tell us which animals from which zoos and wildlife facilities we need to bank samples from, as well as which animals we need to artificially inseminate,” he said. “We go where it is in the best interest of these SSP populations. I worked at Fossil Rim 25 years ago when I was with the Smithsonian focusing on cheetahs, so I’ve known (Fossil Rim COO) Kelley (Snodgrass) and (Fossil Rim Carnivore Curator) Mary Jo (Stearns) for a long time. We don’t do much work with cheetahs at our facility, but with Fossil Rim having black-footed cats now it was a natural fit for us.”

To maximize return on travel investment, Swanson and Moresco visited six other wildlife facilities while in Texas.

In addition to Snodgrass, Stearns and Ahistus, the rest of the carnivore staff –Tessa Townsend and Alexandria Sharkey – was on hand for the procedure, as well as Director of Animal Health Dr. Holly Haefele, vet preceptee Lauren Guerra and vet tech Lauren Nickerson.

“Basically, our role was to provide the anesthesia for the procedure,” Haefele said of the animal health staff. “We needed to make sure none of the drugs we used interfered with what they were doing. For example, the semen sample could have been contaminated if there was a urine leak, which some drugs can cause.”

Morgan was fortunate to be under anesthesia, considering electroejaculation is administered rectally.

“When they stimulate with the electroejaculation probe, it ramps him up in regard to heartrate and temperature,” Haefele said. “But he was a good patient and didn’t need any additional drugs.”

While Fossil Rim doesn’t conduct its own electroejaculation procedures, it is not foreign territory at the facility.

“We don’t have the equipment at Fossil Rim to do it, but we’ve utilized it with outside help before,” Haefele said. “There are only a few crews in the world who specialize in zoo animal reproduction. There were other staff members from the Cincinnati Zoo here a few weeks ago who did reproductive assessments for our black rhinos. We have also worked with a team from Smithsonian Conservation Biology Institute that can do electroejaculation on hoofstock and cheetahs.

“I know of another crew from Germany that specializes in elephants and rhinos. We worked with them several years ago on white rhino collection. Exotic animal reproduction involves a small number of groups in the world that are very specialized.”

While Haefele and Dr. Julie Swenson are the primary care physicians for every animal at Fossil Rim, black-footed cats are certainly on one end of the species spectrum.

“This procedure is exactly the same for electroejaculation of rhinos, but the size difference is obviously so great,” Haefele said. “Even the difference between the black-footed cat and a cheetah is striking. You saw that different people took turns helping with this procedure, because less people can help at the same time for such a small animal; there just isn’t enough cat to go around.”

“When you’re doing a rhino procedure, there are safety concerns because it could move the wrong direction and crush a person,” she said. “For a very small animal, you really have to be careful on your drug doses, for example, as a slight variance can have a drastic effect.”

This past summer, Morgan and Latika were both bitten by a copperhead snake, but the animal health staff worked diligently to help them recover. Now, Morgan will perhaps boost his entire species.

“Ideally, Latika would be fertile, but at least this way Morgan can still contribute to the species,” Haefele said. “There are less than 50 black-footed cats in the SSP in the U.S., and they don’t always breed well, so artificial insemination techniques are going to be key for this species.”