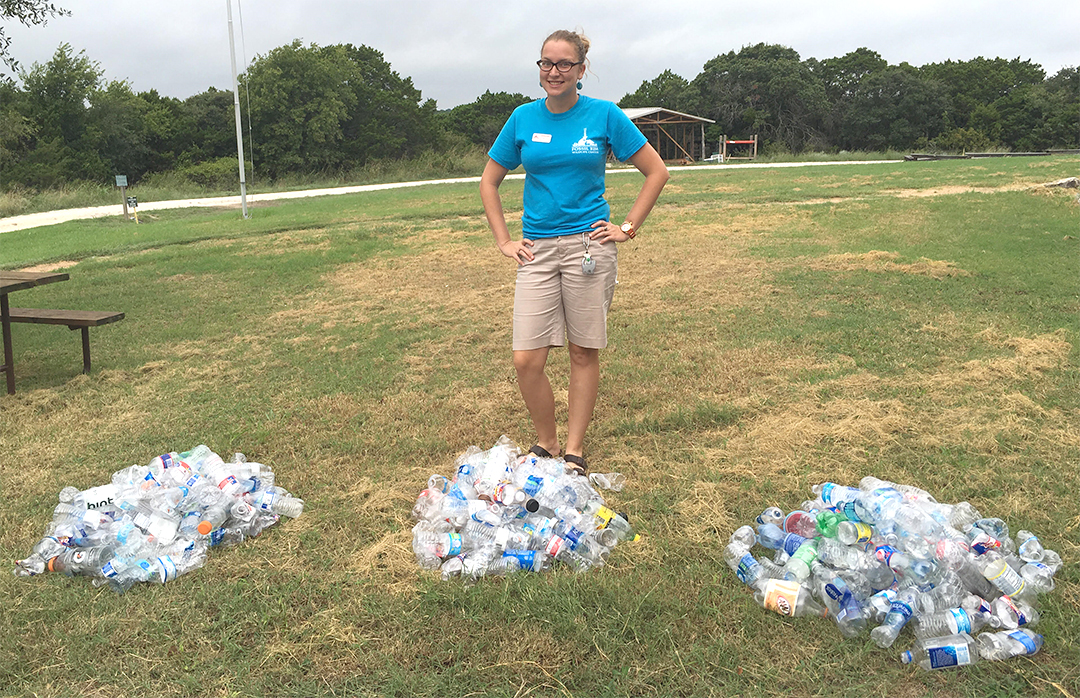 Fossil Rim Wildlife Center has long centered on conservation, but sustainability will become a primary theme as well, if Conservation Education Intern Caitlin Pyle has anything to say about it.

Stationed at Fossil Rim from July to November, Pyle worked in conjunction with Director of Education Tessa Chenoa Ownbey and Support Services Co-Manager Louis Pienaar on a project entitled “Evaluation of Fossil Rim Wildlife Center’s Sustainability Programs” that she presented to staff, volunteers and interns in late October.

“I’ve had a fantastic time here, and I’ve been working on this project for awhile,” she said. “Composting, and especially recycling, are activities the public really respects. They know those activities are good for the world and something they can also do. From a conservation institution like us, they expect a sustainable approach.

“These activities align with Fossil Rim’s philosophy, vision and mission. Plus, we can make the changes I’m going to address and be a role model for our staff, volunteers, guests and other institutions.”

In a study that left no stone unturned, Pyle began by determining what Fossil Rim was currently doing for a sustainable approach.

“We are recycling metal and collecting aluminum, as well as cardboard and feed bags,” she said. “I do think the way we are operating could be more organized, so it is less of a burden on support services. I’ve also found the awareness of what we are doing needs to be better among staff and volunteers.”

Pyle said there are 20 combination recycling-and-trash receptacles at Fossil Rim. For 16 days, she checked the contents of all the receptacles daily between 4-6 p.m.

She found that three of the receptacles went virtually unused, so they needed to be relocated.

“After 16 days, I had recovered 647 plastic bottles from the trash, as well as 34 aluminum cans,” Pyle said. “I removed 86 trash pieces from the aluminum receptacles.”

Pyle also made it a point to specifically track these results for the three-day Labor Day weekend.

“There were 1,914 guest vehicles to enter the park during those days, plus all our tour vehicles,” she said. “I recovered 246 plastic bottles, and 76 percent of all the recycling contamination from the full 16-day period occurred during these three days. These receptacles were overflowing, even though our support services department was emptying them four times each day. It’s human nature that people would then throw bottles or trash into the aluminum bin, so our current setup is a logistical problem on busy holidays.”

Even though the stats were significant, Pyle said they were conservative figures because the receptacles would often be overflowing as she was checking them, which made assessing the entire contents difficult, or some bags had recently been emptied.

She also assessed the facility’s usage of compost.

“Fossil Rim currently does compost with manure, hay and tree clippings, which all goes to support services for our compost pile,” she said. “We don’t have the proper machinery, which could make it more efficient. The Overlook Café has implemented compostable utensils and plates, but it isn’t being composted. We can still close that loop.”

She recognized that motivation on these matters among the staff would be essential.

“There isn’t an employee taking charge and asking these questions, which would create the accountability,” Pyle said. “There can be more of a focus on these things during new employee orientation and in day-to-day conversation. Just like employee education, we can have more public education on this topic. The two biggest hurdles are a storage area for recycling and a recycling facility.”

Having identified various shortcomings in the current sustainability process, Pyle turned her attention to seeking solutions. She split them up into short, medium and long-range goals.

“We can improve our recycling program with more diverse receptacles, in terms of adding a plastic bin and also a compost bin where applicable,” she said. “We can use auxiliary trashcans for especially busy holidays, which would prevent contamination of the recycling bins and also free up the support staff from constantly removing trash bags.”

She recommended three of the receptacles be relocated to the tours window, Overlook Café interior and education office exterior – areas with higher anticipated trash volume.

“I proposed new compost collection locations at several points in and out of the café, as well as the Foothills Safari Camp, administration building and the animal food prep kitchen,” Pyle said.

Obviously the compost can be utilized on Fossil Rim property for the most part, but where would the recycled materials go? Pyle had two prospects.

“One, I have a connection with Tarleton State University (in Stephenville), and they have a recycling center there,” she said. “They will take our recycling materials for free if we transport them. We wouldn’t get any money from it, but at 29 miles it’s a much closer drive than what we’ve done in the past.

“Second, through TSU I connected with Green Tree Resources, a recycling facility in Cresson about (35) miles away. They would like to team up and sell our recycled materials, so we get funds back, plus they would like to be consultants for us.”

In regard to medium-term goals, Pyle was considering a five-year timeline.

“We can strive to expand and maintain these recycling and composting programs I’ve discussed,” she said. “I think developing a team of volunteers to assist in our sustainability efforts would be very beneficial, as far as (Texas) Master Naturalists and (Texas) Master Gardeners, Boy Scouts, Girl Scouts and schools, for example. A bagging facility for excess compost would help, because Fossil Rim has sold fertilizer in the past and it was very successful. Always working to improve sustainable land practices is important, as well.”

Pyle delved into supplementary sustainability solutions, such as refusing.

“We can choose more carefully what we buy,” she said. “Don’t base the decision solely on price, but also what it is made out of, how and where it’s produced – what’s the carbon footprint of the product?”

“It would be outstanding to develop a nationally recognized sustainability reputation,” she said. “It is a dream of mine to see Fossil Rim have its own recycling facility one day, which could be utilized by all of Somervell County.”

She brought the local school district, Glen Rose ISD, into the fray. Pyle hopes Fossil Rim will approach the district in the future to form a recycling education and implementation partnership.

“If we partner with GRISD, students could develop lifelong habits to utilize compost and recycling once they understand it,” Pyle said. “A lot of schools have developed a Green Team. Such a partnership could mean a huge influx in our compost material and our community involvement in general.”

Pyle discussed needed equipment to carry out her ambitious plans.

“A multipurpose baler for plastics and aluminum would allow us to store those materials much more efficiently, and a designated storage area would be helpful in terms of organization,” she said. “A tub grinder could grind up scrap wood pieces, which would cut out cost on wood we otherwise pay to have taken away, and turn it into useful mulch. A windrow turner and trommel screen would allow us to be much more efficient in compost production, plus I mentioned earlier the need for a bagging facility.”

Having focused on conservation education since she arrived at Fossil Rim in the summer, Pyle shared her ideas in that arena during the presentation.

“There is a huge opportunity for education with these programs,” she said. “When I do my camps and tours, so many kids ask me what they can do to save these animals and things they can do at home to help out. I tell them that coming to Fossil Rim was a great step, but if we have a plan to teach them about sustainability, that’s important in our efforts to save the Earth so that the animals we are trying to save have a place to live.

“We can use camp programs with sustainability themes and do school outreach events. Better staff and volunteer education on this topic is a must for these plans to gain a foothold and be as productive as I know they can be.”

“We have some free advertising space for these programs readily available, considering one side of all these receptacles throughout Fossil Rim is currently blank,” she said. “We can store and then sell our recycled materials to Green Tree Resources, there are opportunities to recruit new donors and apply for new grants, we can produce our own fertilizer and remove purchasing commercial fertilizer from the budget, we can sell excess compost, grinding up our scrap wood is an example of how we can save on waste disposal costs, we can sell reusable bags in the Nature Store, plus there is the option of community recycling collection. For example, we add aluminum cans from the Glen Rose community to the cans we have prior to sale.”

The theme of sustainability is not a new focus for Pyle.

“I have a master’s degree in biology, so I was familiar with the scientific method of data collection I used for this project,” she said. “I also have a track record of bringing recycling wherever I go, dating back to high school.”

Pyle’s presentation was well-received by Fossil Rim staff, and she appreciated their cooperation.

“Thanks to the education department for letting me run with this project, thanks to support services for their help along the way and thanks to tours for letting me use their vehicles for my data collection,” she said.

“Caitlin presented this plan to our management team and they were receptive to it, which is encouraging,” said Katie Hunholz, programs coordinator.

“I think this was an excellent presentation, and there are some simple things we can do as a staff right now,” said Adam Eyres, hoofstock curator.

“It is good to have several phases of this plan so we can tackle some of it right now, such as moving some of the receptacles to more effective locations,” said Pienaar. “Then, we can prepare for the medium and long-term goals.”

Sometimes, it takes an agent of change to provide a spark. Caitlin Pyle is driven to get this ball rolling and make sure it sustains momentum long after she has departed to tackle a new challenge.