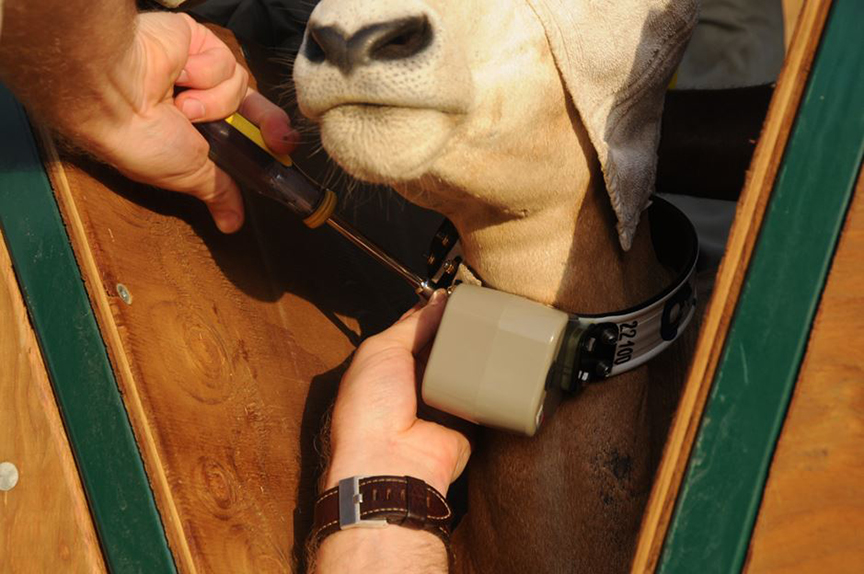 Traveling abroad numerous times in recent years to help lay the foundation for an extinct-in-the-wild species to reemerge, Adam Eyres saw all the preparation culminate on a memorable summer morning in Chad, Africa.

Fossil Rim Wildlife Center’s hoofstock curator, Eyres helped facilitate the release of 23 scimitar-horned oryx Aug. 14 to begin what is a multi-year reintroduction into their native land.

“We’ve been involved with this project for about six years,” Eyres said during a September presentation to Fossil Rim staff, volunteers and interns. “This is such an impressive project, and it’s great Fossil Rim is as involved as we are. A reintroduction of this nature hasn’t been done, although there was one for Arabian oryx almost 40 years ago with a smaller number of animals.”

“Our logo appears on almost everything presented about this project through SCF,” he said. “EAD (Environment Agency – Abu Dhabi) funds this project and hired SCF to execute it. SCF is being assisted by SCBI for the GPS radio collaring aspect, assisted by Zoological Society of London for in-field report writing and assisted by Fossil Rim for the technical aspects of captive animal care.”

Fossil Rim also contributed 18 of its own oryx to the “World Herd” in Abu Dhabi across two separate shipments.

In the spring, the oryx selected from the World Herd were shipped to Chad, where they were placed into a 100-acre release pen in the northeastern portion of the nation and began to acclimate to their new surroundings.

“We traveled eight days to do two-and-a-half hours of work,” he said of the collaring. “This remote location is ideal for reintroductions because it means that it is also relatively human and livestock-free. Because they would cost so much to ship back, the animal crates were kept at the release site for storing items like hay and feed.”

There were Chadian workers helping with the collaring, and Eyres credited the excellent teamwork.

Prior to release day, food and water rations were reduced to help the oryx prepare to survive with less than they were accustomed to. Blood tests were done to verify the health status of the herd.

While SCBI brought 85 radio collars to Chad, only 23 were used for this release and thus the best ones were selected.

“It took 12 hours to receive initial satellite data from the collars, so we wanted to get them on well ahead of the release,” Eyres said. “The collar study at Fossil Rim helped determine the proper neck sizes these collars needed to be created to fit. A teardrop collar is being designed especially for scimitars due to their unique neck shape among ungulates.

“We only had a few of them for the first release, but I think in the future we’ll go entirely with those. They are easy to put on and size properly.”

Some of the collars were designed to last 18 months, while others have lifespans of two and four years.

“At the end of each collar’s respective lifespan, they will drop off automatically,” Eyres said. “They can also be dropped off remotely if an oryx is growing too fast, for example. We used expandable collars, so it should be okay as they grow.”

Chad was just coming out of the wet season in mid-September, so this release gave the oryx a good opportunity to adjust to life on their own while their environment is still relatively mild.

Eyres detailed how the oryx responded in the hours and days to follow the release into the wild Aug. 14.

“The first three oryx left the release pen and reentered multiple times,” he said. “We wanted to make sure if these animals encountered hardship and couldn’t hack it, they would still associate positively with the release site. Ultimately, they left as a group in the middle of the night.

“One of the females never left, and a male returned. After a couple of days, they closed the gates and kept those two there.

“It is actually beneficial, because when government officials visit the release site, there are animals right there for them to see, as opposed to disturbing the ones in the wild. Then, we’ll just let those two out with the next shipment we’re planning for November.”

Months later, the oryx are still doing well as they traverse the Sahara Desert.

“They are mostly staying together,” Eyres said. “These scimitars aren’t as afraid of man as we would prefer. Fortunately, all the people they are seeing are very supportive of this project.

“There was one female that separated from the herd and is now traveling with addra gazelles. She is learning from them, so she is more fearful of man.”

A new addition to the released herd bodes well for the future of the species. EAD recently announced the first oryx calf has been born in the wild.

It is fantastic news for this project because every birth is a step towards sustainability, as it increases the size and thus the genetic diversity of the herd. Reports from SCF state there are other pregnant females in the herd.

When he last visited Fossil Rim, SCF Founding CEO John Newby stressed that the social component of conservation is the most important aspect.

“Outreach with the locals is critical,” Eyres said. “It’s one thing to say the government doesn’t allow poaching, but you have to get people in the local region to buy into that, as well. There are older Chadians who remember when scimitars used to be in Chad, and there are also respected community members who are telling others that scimitars are important and not to poach them.

“If this was happening in 2026, I don’t think (the nostalgia) would factor in anymore. SCF did a lot of PR with this project in Chad, because they really wanted people to be excited and supportive of it. A crew from a Chadian TV station filmed a documentary on the release, and we saw it before we left Chad.”

A portion of the project budget was used to hire more local staff, purchase more vehicles and construct a camp for the monitoring staff near the release site. The rangers who monitor the reserve have their camp near the release camp, and the two groups work well together to not only take care of the animals, but also to monitor them in the wild and educate locals about the project.

“Locals need to be on board with the reintroduction – whatever their reasoning is,” Eyres said. “This reserve is the size of Indiana. Even though we have a lot of rangers out there, they can’t see everything.

“But if a GPS collar stops working, they’ll go check. The collars also use telemetry, so if the collar isn’t working correctly rangers can still find the animals, as opposed to being solely dependent on global positioning.”

There is a chance the release slated for November will include 30 oryx.

“The difference next time is they won’t sit in the release pen as long,” Eyres said. “We will collar them in Abu Dhabi, ship them over and release them fairly quickly, depending on environmental conditions. Then, hopefully the third release is in January. Abu Dhabi and Chad both get very hot, so these releases are best suited for November through February.

“October and even September are okay, but the key is you want them learning about their new habitat during the winter season. There won’t be standing water for some months of the year, so they have to learn to get it from plants. They should still have that instinct.”

With the reintroduction’s success hinging on continued support from the Chadians, it was promising for the oryx to unknowingly deliver a gesture of good will as they returned to the country.

“Right before the scimitars arrived, it started to rain,” Eyres said. “So, local people are making the association and considering them a good omen.”