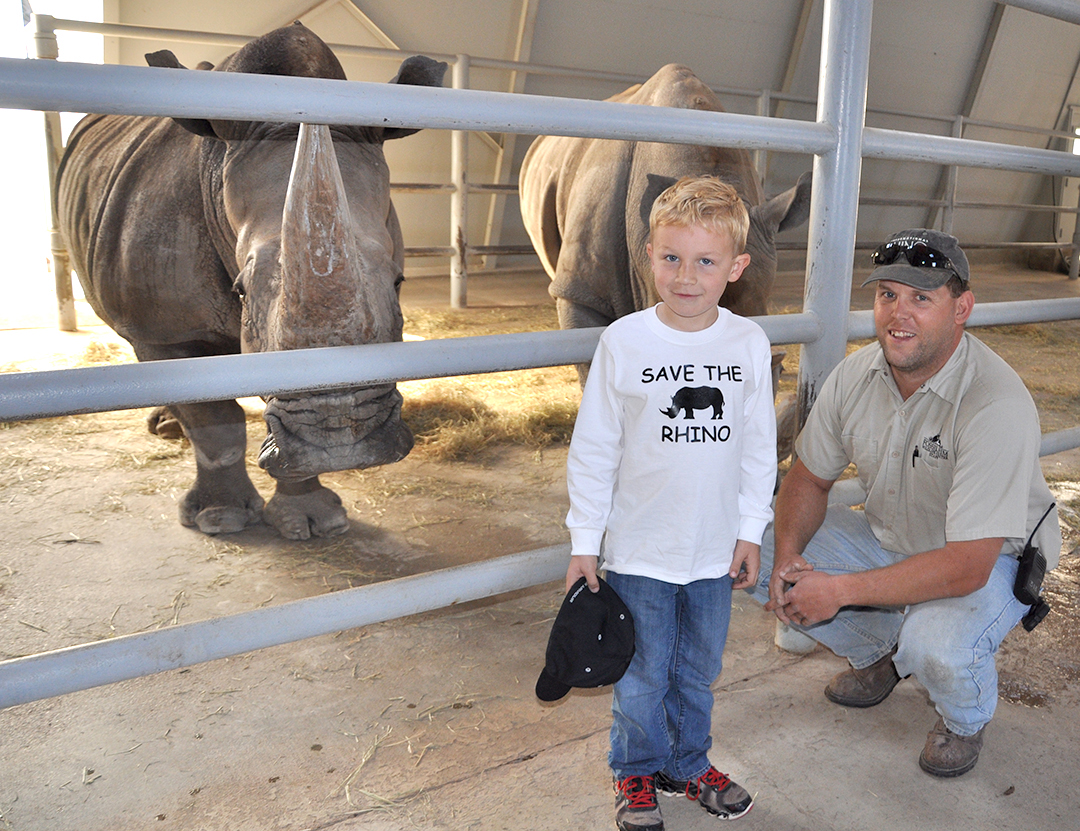 The world of the modern rhinoceros is a complicated one.

Discussing this animal in advance of World Rhino Day on Sept. 22, Fossil Rim Wildlife Center Lead Rhino Keeper Justin Smith was happy and sad, as well as frustrated and hopeful.

Smith’s determination was evident when he addressed the efforts of Fossil Rim staff to breed the park’s southern white rhinos and southern black rhinos.

“For our white and black rhinos, it has been at least five years since we had a rhino birth of any kind,” Smith said. “It’s a long process, and all rhino species are difficult to breed. Even when they are breeding successfully, calves are going to be at least three years apart for a female rhino.”

Fossil Rim currently has one white rhino bull and three females. The bull has been placed with two of the females recently. Breeding attempts have been made off and on since December 2014.

“We were concerned that leaving a mother-daughter pair together could cause them to block each other from being bred with the potential of it being a hormonal issue, so they have been separated since July 2015,” Smith said. “The mother did mate the first day after they were separated, although we can’t be absolutely positive that was the issue. After all, we don’t have a new confirmed pregnancy yet, but we believe that mother is the top candidate. The other female in with the bull just reached breeding age at nearly five years old.”

As opposed to black rhinos, multiple white rhino females can share a yard with a bull after a couple of days of introduction. That gives each female the opportunity for pregnancy.

Smith does find it more difficult to tell when the white rhinos are ready to breed compared to the black rhinos, simply because there are human eyes almost constantly fixed on the black rhinos at Fossil Rim.

“I go by to observe our white rhinos for awhile multiple times each day, but the black rhinos have an intern who is nearly always there,” said Smith, who is also responsible for a wide variety of other hoofstock. “Also, with black rhinos being located beside our (Attwater’s prairie chicken) facility those staff members help keep an eye on their activity for me.”

Fortunately, Smith knows what he is looking for when he does get time for even a passing sighting at the white rhino yard.

“Some days I don’t have a lot of time to stay and watch them, so I may drive past several times,” he said. “Having experience to know what signs of breeding interest I’m looking for helps with those limited opportunities.”

Smith uses every tool at his disposal to assess behavior, including middens, or manure piles.

“The white rhino bull will go over to one of the 3-5 middens that are scattered around their yard and be able to tell from the females’ urine or feces if they are ready to breed,” he said. “If I see him show interest right after checking out a midden, I know at least one of the females is in heat.”

There is another keen observer in the mix whom Smith consults regularly.

“Arnulfo Muro (of animal care support) is a jack-of-all-trades who has decades of experience here and is a key staff member to assist me with rhinos,” Smith said. “He helps me mainly with the black rhinos, but during the wintertime it’s very even between them and the white rhinos. He has a great animal sense, and I count on him to help with observations. I can also count on my boss (hoofstock curator) Adam (Eyres) and his decades of experience and knowledge, as well as the other members of our hoofstock team.”

Bloodwork on the female rhinos began in August to determine if there is a potential pregnancy.

“We hope we’ll get somewhere with these efforts and have some white rhino calves on the ground in the near future,” Smith said.

If getting white rhinos to breed sounds like a challenge, Smith considers facilitating black rhino reproduction a much tougher task. Similarly, there is also one black rhino bull and three females.

“Black rhinos are a solitary animal, so in the wild you may only see them with a calf or with an adult when breeding,” Smith said. “So, I don’t have the option to put a bull with multiple females. I have to watch their behavior even closer than whites, because they normally don’t interact and the chance for aggression is greater. Only recently, due to increased efforts to facilitate breeding, we have left a black rhino bull and female together since early June.”

That is the plan until a pregnancy can be confirmed, and bloodwork will be done soon on the female. Concerted efforts to breed Fossil Rim’s black rhinos have been going on for more than a year.

“The current female is more easygoing than the previous female he was matched with, plus he is an unproven sire,” Smith said. “If we can successfully breed this black rhino, we will look to match a different one up with the bull. There are less than 40 southern black rhinos in North America, and only a few of them are in the breeding age window.

“So, we need to determine for sure if our females can still get pregnant. If not, we’ll need to see about bringing in a female that can.”

As he continues to do everything possible to facilitate this rhino reproduction, Smith is keeping his eyes open for any clues that could make a difference.

“With technology now, my interns can get photos and video footage of the rhinos to share with me so I can gain some insight even when I’m not there,” he said. “I will never know everything about rhinos, but I know how to stay out of danger and can pick up on some subtle behaviors. I try to teach these things to my interns, so they can be safer working around animals and be more effective observers. If they see something of interest, they know to contact me or Adam immediately.”

This part of the rhino life cycle is so critically important to Smith, because far too many of the creatures are ending up at the opposite end of the spectrum in the past decade.

“The fact they don’t reproduce quickly brings me to the issue of poaching, which World Rhino Day addresses on September 22,” he said. “Right now at the current poaching rate, the survival of rhinos isn’t sustainable.”

“All together, that’s less than 30,000 rhinos, and now 1,500 rhinos are being poached each year,” Smith said. “They could be extinct in the wild in 10 years at that rate. In 2007, there were only seven rhinos poached. World Rhino Day is our best opportunity to bring attention to this crisis.”

Rhinos are killed for their horns, which are then ground into a fine powder and sold for huge sums of money. According to Smith, one kilogram of rhino horn is worth a minimum of $50,000 on the black market.

“Their horns are made of keratin, which has no known medicinal value, even though that notion has existed for thousands of years,” Smith said. “Even worse, now it has become a status symbol to show wealth and mystic power. The demand is significant in Southeast Asia, especially Vietnam and to a lesser degree, China. It’s so crazy; it gets me worked up just to talk about it.”

Well aware of the often gruesome tactics used by poachers, Smith’s passion to protect these animals is evident.

“Poachers are now only taking one (gunshot) so they don’t attract more attention, considering there are anti-poaching dog units, drones and armed guards trying to combat their efforts,” he said. “National militaries have been deployed in some areas to get this under control. Poachers will just try to wound a rhino, and then hack off its horn or just knock it off. They won’t hesitate to butcher these animals alive.

“There are cities built on the outskirts of Kruger National Park in Africa that have become more developed based on poaching. They will use any tool at their disposal, including poaching rhinos by helicopter, and vets have helped them do it.

“Some poachers will see a photo of a wild rhino on social media and see if they can determine its location. This is not just an African problem; it’s a global one.”

Though some poachers will kill a mother rhino and the calf will survive, those rhinos will still have to be cared for.

Although it is difficult to see the poachers as anything but villains, those who buy the rhino horn seem detached from the reality of what actually happens for them to get it.

“While it may be obvious to me that rhino horn has no medicinal benefits, we are up against thousands of years of culture touting the benefits in some countries, as well as it evolving into a status symbol,” Smith said. “There is a disconnect. The people consuming the rhino horn in Asia don’t see the rhino crying out in agony in Africa. If you can slow and eventually stop the demand, it will end the poaching. It’s not hard to see why this is happening with the amount of money at stake, but it’s sad and we have to keep fighting it.”

It’s not all doom and gloom for Smith; he sees a path to rhino prosperity.

“These countries where the rhino horn is being bought know they have a problem,” he said. “Yao Ming is a great example of a famous person campaigning against it. The campaigns going on against rhino horn and ivory tusk poaching provide hope that we can turn this crisis around.

“A lot of people are stepping up and trying to make a difference. A friend of mine had seen enough and gotten involved. Not only does he raise funds to get rangers the necessary equipment, but he also took it upon himself to become a trained ranger and help fight in this battle for rhinos.”

Two days after the official World Rhino Day, Smith hopes for great participation at Fossil Rim’s World Rhino Day Celebration on Saturday, Sept. 24 for one of the free Family Fun Days as hosted by the education staff and interns. From 9 a.m. to 3 p.m. at the front gate, it will be all rhinos, all the time.

“Please educate yourself about this issue, and our education department is going to help you and your children understand if you will visit our World Rhino Day event,” he said. “It’s a very important day for us that our education staff is busy preparing for. The best thing we can do is educate and try to stop the poaching process while rhinos are still on Earth.”