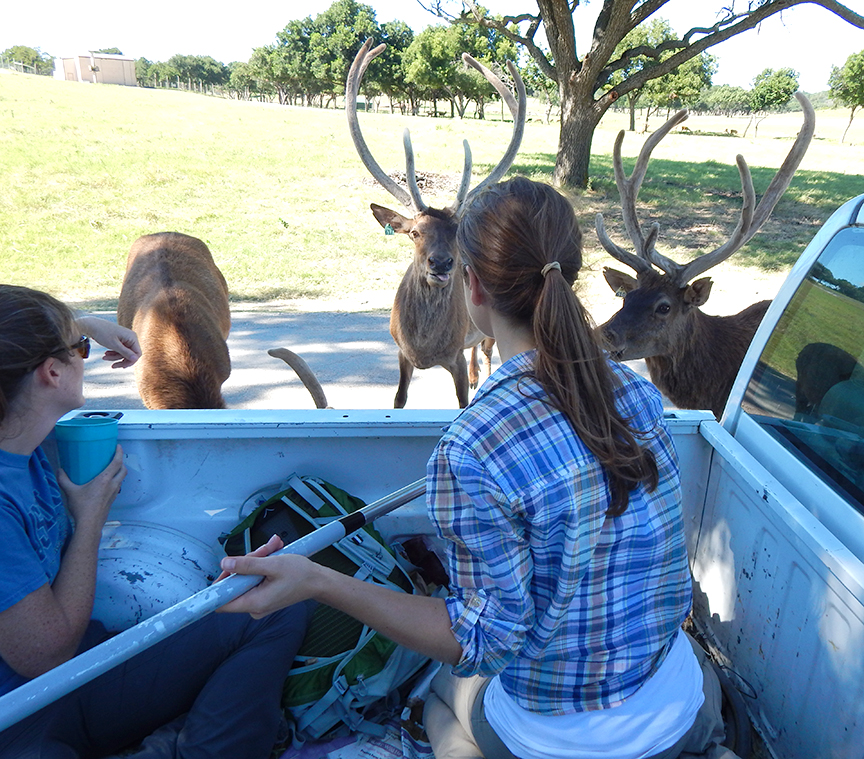 Kira Hydock knew she wanted to gain some hands-on experience at a place like Fossil Rim Wildlife Center, but when someone told her it could be in 2016 the Pittsburgh native was flat-out shocked.

After all, Hydock, a graduate of Penn State with bachelor’s degrees in Veterinary and Biomedical Sciences in addition to African Studies, was only entering her second year at the University of Pennsylvania School of Veterinary Medicine. An externship at Fossil Rim was reserved for fourth-year students at vet school, or so she thought.

Fossil Rim had a preceptee spot unexpectedly open up, and thus Hydock’s phone rang in June.

“It was incredible the way it worked out that I was able to have this experience after just one year of vet school,” said Hydock, who spent July 3 through August 25 at Fossil Rim. “I don’t know anywhere near what a fourth-year student normally would know, so I wasn’t sure what (Fossil Rim veterinarians) would expect from me. But, they have been so helpful, and it feels like they really value my opinion with how they ask my perspective on things. That was surprising to me, and I was really appreciative of it.”

Hydock was a month into her summer job at the exotics ward of her school’s veterinary hospital when she got the call, but her supervisors were very supportive, calling the Fossil Rim preceptorship a “once-in-a-lifetime chance” she had to take.

“I was just so honored they would even consider me,” she said. “I didn’t see it as accepting a challenge at first, but it really was and it has opened a lot of doors for me. I have gone to a couple of conferences during my time here, and being able to say I’m at Fossil Rim impresses people. It’s given me something to talk to new people about and helped make more connections in the veterinary field.”

Toward the end of her time at Fossil Rim, she gave a project presentation to staff, volunteers and interns.

“I did a presentation about our two black-footed cats that were involved in copperhead snake envenomation,” Hydock said. “I discussed the differences in their responses to their respective snakebites and the different treatment routes we had to navigate.”

She researched past snakebite incidents at Fossil Rim, too.

“I think this incident made me realize how lucky (the black-footed cats) ‘Morgan’ and ‘Latika’ both are,” Hydock said. “These black-footed cats are so small and were so fortunate to be diagnosed and treated in time to survive.

“It’s probably very unlikely they would’ve survived a rattlesnake bite. I’m thinking about writing a paper on this topic.”

When it comes to memorable moments during her time at Fossil Rim, the aforementioned snakebite incident is mentioned for obvious reasons.

“The black-footed cats being bitten and treated were at the top of my list, because those days were the hardest,” she said. “It was my second day here when they were bitten, and (Fossil Rim Director of Animal Health Dr.) Holly (Haefele) and I didn’t get lunch until 5 p.m. I didn’t even care, and that’s really why I want to be in this field, because we are able to save animals like that. That incident showed me that I do want to put in the time to learn and work hard.”

Also at the forefront of her mind was an instance where Haefele and Dr. Julie Swenson, associate veterinarian, really put their trust in Hydock.

“I got to do a scimitar-horned oryx neonate exam with just (veterinary technician intern) Morgan (Rosenbaum), which made me feel like I was almost a vet,” she said. “It was the cutest baby, plus it was really cool to feel like the vets trusted us with a big responsibility.”

Speaking of the vets, Hydock smiles at the mere mention of Haefele and Swenson.

“I can’t thank them enough,” she said. “Not only for the opportunity, but the responsibilities they’ve given me. I’ve been working on quite a few projects and updating documents.

“They’ve been very supportive, plus they’ll always quiz me. That helps me confirm what I do know and realize all that I don’t know.”

Swenson suggested Hydock might want to take a frequent activity amongst Fossil Rim animal health staff home with her to Pennsylvania.

“Julie gave me the idea for a club that I’m hopefully going to carry out back at school,” Hydock said. “We did a weekly journal club during my time at Fossil Rim where each one of us read an article, presented the findings to the others and came up with a relevant question. It was a wakeup call that I will really need to pay attention to medical journals in the years to come, and this is a valuable study technique I can keep using.”

Not to be overlooked, Hydock talked about learning from Lindsay Cosmi, veterinary technician. In fact, during her black-footed cat presentation in regard to the fact Cosmi came in on her day off to help after the snakebites, Hydock made a superhero bearing a striking resemblance to Cosmi fly in from the side of the projector screen.

“Lindsay taught me a lot in terms of lab skills,” Hydock said. “Unfortunately, that’s not a focus in vet school. Even if that is generally handled by the vet tech, I think it’s really important for veterinarians to understand how to do it. What if the tech isn’t there?

“It could cost an animal its life. She helped me a lot with parasitology and blood cell counts on a slide under a microscope. Morgan (Rosenbaum) also taught me so much. These are things I didn’t even consider learning when I got here, and I think it is some of the most important knowledge I’m leaving with.”

Of course, Hydock was not working 24 hours a day, so she had the opportunity to get to know some other twentysomethings while living inside Fossil Rim at the intern house.

“I loved living there,” she said. “It was so much fun. I loved getting to know people with a shared interest.

“We all wanted to know what was going on in each department, plus we were friends beyond work. I’m still amazed I got to drive through the park to where I lived, and I got to wake up to see ostriches and wildebeest right outside.”

When she recalls moving to Texas, Hydock did not know what to expect.

“I’d never been to Texas, or even many rural areas before,” she said. “The amount of open land here was a foreign concept to me. Just the experiences themselves: drawing blood, giving injections and medications were meaningful.

“I know a lot of older students who spent time at other institutions without near this level of hands-on experience. I think that’s a huge advantage to be able to practice techniques.”

On that note, capitalizing on this chance years earlier than most has Hydock heading back to vet school with her chin up and ready to tackle the curriculum.

“I already filled up two pocket notebooks with information I will be able to look back on that I learned here,” she said. “I have a parasitology class this fall, and I did so many (fecal analyses) with Lindsay and Morgan that I feel much more prepared now. Anesthesia is supposed to be one of my most difficult classes, and I feel so much more comfortable with the different drugs, reactions and related subject matter because of the immobilizations I assisted with here.”

Hydock is a woman on a mission to earn her VMD degree at the University of Pennsylvania, which is known as DVM (Doctor of Veterinary Medicine) at all other U.S. vet schools.

“I really want to go into the zoo and wildlife field, plus I am interested in research to contribute to field studies, especially in Africa,” she said. “After being here, I feel like I’ve seen conservation in action. I would love to be able to work at a place like Fossil Rim. I love the free-roaming setup here.”

Considering how the experience has affected her in less than two months, it should be no surprise Hydock is giving two thumbs up to prospective Fossil Rim preceptees.

“I would definitely encourage someone to come learn at Fossil Rim,” she said. “Unless you experience this, I don’t think you can understand how different it is compared to the environment and management of a traditional zoo. I just love it here so much!”