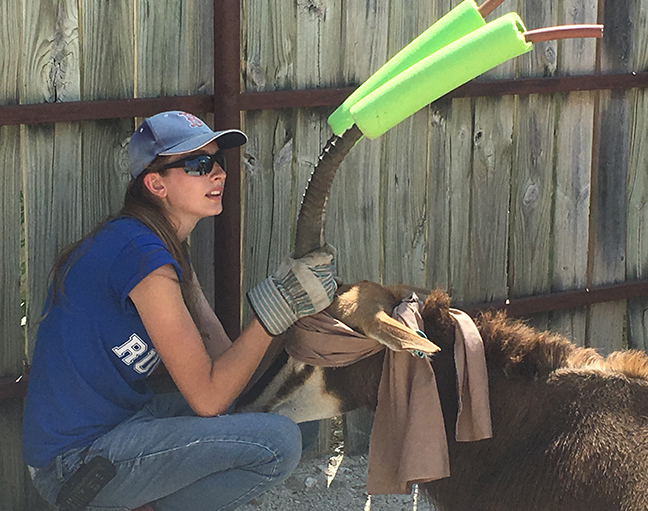 Melanie Dittmer spent three months at Fossil Rim Wildlife Center as a hoofstock and behavior research intern, but she was motivated to see the scope of her experience grow.

“My long-term goal is to become an exotic animal veterinarian,” she said. “I look forward to starting vet school, so I was fortunate to be able to shadow the vets here on my days off. That enabled me to learn the medical side of things.

“At the same time, I was very interested in the opportunity with animal care because I love it in addition to animal medicine. Now that I can look back on it, I’m so glad I did it. This internship was huge for me to continue to build my understanding of animals.

“Every type of experience is beneficial. I think my day-to-day was what most hoofstock interns experience here, although there were a couple of times when I requested to go watch a (medical) procedure and they were really open to letting me do that.”

A native of Carrollton, just 95 miles from Fossil Rim, Dittmer had seen the facility before – sort of.

“I came to Fossil Rim during school when I was little, as well as with my family,” Dittmer said. “When I was applying for internships this summer, on a whim I figured I would check Fossil Rim’s website. I applied for several of the different ones offered, and having research experience from my undergrad degree helped me get this internship.

“I found out I barely knew anything about Fossil Rim before I got started here in May. I didn’t realize all that goes on here with the different endangered species and things like that. I thought it was just a drive-thru safari.

“If you just visit in your own vehicle, you have no idea about what’s really going on. The recent scimitar-horned oryx reintroduction project is a great example of the staff here trying to make a difference.”

One animal care staff member in particular invested a lot of time to help Dittmer learn the ropes regarding hoofstock.

“Michael Birt was definitely the person I worked with the most,” she said. “He interacted with my research advisor, Dr. (Jane) Packard, and he’s on the hoofstock staff, so we fed the animals together daily. I’d run research ideas by him. Michael was really good about making sure I felt comfortable in my role, plus he’s a great teacher and explained new activities well.

“I got to work with (rhino animal care specialist) Justin (Smith) sometimes on projects and help with black rhinos a couple of times, which was fun. Plus, (hoofstock curator) Adam (Eyres) works with everyone on hoofstock activities.”

When the day came for her presentation in front of Fossil Rim staff, volunteers and fellow interns, Dittmer addressed not one, but two, projects.

“My primary research project was about the effects of the social and physical environment on behavior of sable antelope females with a focus on conflict interactions and leadership movement,” she said. “I took the opportunity to study the herd dynamics before and after matriarch removal. Two-thirds of the way through, a parasite hit the herd and they had to be put in a pen in order to deworm and monitor them.

“At that point, we changed my project focus to the effects of matriarch removal, as well as effects of reduced space on sable. The project may have been altered, but there were still observations to be made from the data.

“A memory that stands out pertaining to my hoofstock internship was the day we removed the sable from the Main Pasture because we did several immobilizations, and I learned how to handle animals under anesthesia from Justin and Adam.”

“There wasn’t a lot of literature in that area, so I’m working on a literature review for other species that have been established as social: apes, marine mammals, cattle, horses and elephants,” Dittmer said. “I’m looking at how living in herds has proven beneficial to those species, and then how we can apply that to ungulates in future studies. It is a very interesting topic.

“One of the coolest things about being a hoofstock intern is learning about the social herd dynamics. It’s natural for them to live this way and you see the benefits, potential concerns and other considerations.”

She appreciated learning why decisions are made by the staff.

“I loved getting to see the behind-the-scenes version of how the pastures are managed: which animals are where and why, how big each particular herd is and herd management,” Dittmer said. “Every individual animal has its own story, and I didn’t expect to get to know that so well.”

On the animal health side of her experience, primarily on her days off from the animal care internship, Dittmer most often shadowed and learned from Dr. Julie Swenson, associate veterinarian.

As it turns out, the learning did not conclude when Dittmer headed to the intern house at the end of the day.

“I lived with six other interns the majority of my time here,” she said. “It was amazing because we got along really well. Even though we all worked in different parts of the park, we are all interested in animals and learning about different species. Just being able to sit and talk with different people who love the same things I do and trade stories about our days in the park was great.

“As an intern group, one day we went to visit the Fort Worth Zoo. Going to the zoo with other animal people is the best.”

The recipient of a bachelor’s degree in biology from LeTourneau University in East Texas, Dittmer is keeping her eye on the prize of veterinary certification – ideally via graduate studies at Texas A&M, but she has a rock-solid backup plan to pursue a master’s degree in wildlife science.

“I’ve done several internships and a research project in Africa, and Fossil Rim was an awesome addition to my list,” she said. “I’d tell anyone in my position considering Fossil Rim to definitely do it. This has been an amazing experience, and everybody here has been really great about teaching.

“A goal of many people here is for interns to learn as much as they can and be involved in a lot of different areas of Fossil Rim. They facilitate that really well, so it is an awesome place to get hands-on experience in a wide spectrum of conservation.”