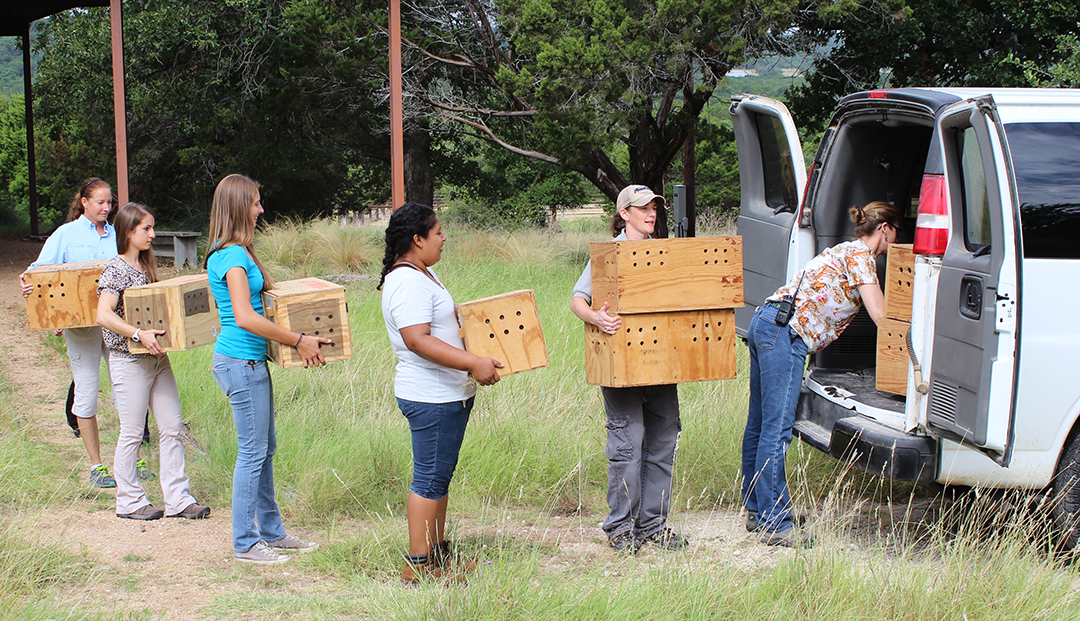 When “chick season” draws near inside Fossil Rim Wildlife Center’s Intensive Management Area, it is time to buckle down and focus in.

For Janet Johnson, avian curator, and Cara Burch, senior animal care specialist, all their hard work each year for the critically endangered Attwater’s prairie chicken (APC) pays off over the course of five visits from U.S. Fish and Wildlife Service Wildlife Biologist Mike Morrow during early July to mid-August. But this story begins months before his first trip north from the Attwater Prairie Chicken National Wildlife Refuge.

“We try to do our semiannual health assessments in late January and early February, and then again in June,” Burch said. “We catch all (the birds) so our animal health staff can give them blood tests and deworming. Once we get the test results back and all the birds are okay, we try to get them paired up with the right mate in late February and early March. The sooner we get the pairs situated (in their own pen) the better, because it does stress the birds out to be handled and moved.”

All hands on deck

Spring Break is literally the last break for awhile at the APC facility, and even then Burch and Johnson are preparing for eggs to be laid. This year, the first APC egg arrived March 23.

“During most of April, the birds are displaying (with a mating dance called ‘booming’), hens are building nests and we are collecting eggs,” Burch said. “The mating ritual is one of the neat things about this species, because the males undergo such a drastic change in appearance and behave much more aggressively toward other males and humans to defend territory. The rest of the year, it’s hard to tell males from females and both are skittish around people.

“Most eggs are laid in April. By late April, eggs are hatching and we have chicks to take care of. That’s when things really get rolling.”

“May and June are definitely the busiest months for us, because the chicks are a lot more labor-intensive,” Burch said. “Our biggest hurdle is getting them past seven days, and then they’ll normally survive.”

Burch explained the division of labor at the facility.

“During chick season, J.J. (Johnson) is almost totally occupied with the eggs and incubation,” she said. “My job is dealing with the chicks. We are both here seven days a week for 8-9 weeks straight. We have to be, and we want to be, because things can change so much in a day with chicks.

“We only have interns during chick season. They make food diets, clean cages, do dishes and more.

“They are busy all day, especially considering the chicks are fed a specific diet four times a day with the frequency reduced over time. Interns have been here both times J.J. and I have gone together to a conference, but we have Molly Shea to hold down the fort.”

Normally Fossil Rim’s giraffe caretaker, Shea also tends to numerous other hoofstock species before turning her focus to APCs when her coworkers need her.

“Once we start getting busy with hatching in early May, Molly is like my right-hand man helping with the chicks,” Burch said. “She’s also J.J.’s right-hand man because she takes care of all the adult birds and our cranes. She’s a floater who helps with whatever needs to be done.”

Like Shea, the Fossil Rim animal health staff becomes a regular presence at the APC facility when the activity ramps up.

“The vet staff is here 2-3 times a day from the first hatch through July, as they treat the chicks that aren’t gaining weight,” Burch said. “During the rest of the year, they’ll go months without being here unless we have a problem with an adult bird. It really changes how their schedule works, too, so it doesn’t just affect us (in animal care).”

When Morrow visited in late July to transport the third of his five 2016 shipments of APCs from Fossil Rim to the refuge in Southeast Texas, he was able to share some encouraging insight about the species.

“The wild APC population was up to about 130 this past spring, which is the highest it has been in about 25 years,” Morrow said. “We are definitely making some progress. We have been able to release more birds into the wild thanks to facilities like Fossil Rim. We are still working through problems of reproduction in the wild, but I think we will get there and then the wild population could take off pretty dramatically.”

Although Fossil Rim is the premier production center for APCs, Burch and Johnson prefer to focus on the bigger picture.

“We’ve set records the last couple of years on number of birds released, as far as all facilities combined,” Burch said. “After 2014 production set the record, we topped it again with almost 600 birds in 2015. This year, Fossil Rim stayed at about the same level of production with 289 chicks hatched and 230 surviving.

“There were 179 of our chicks selected for release, as well as 20 adult birds, for a total of 199. We always want more eggs and more chicks, but we were pretty happy with what we wound up with.

“There are a total of 327 APCs set to be released this year from all four facilities, and that overall number is down this year. It’s about the big picture, so we want Houston Zoo, Caldwell Zoo and Abilene Zoo to raise as many as they can. That’s the best way to help the species.”

A Fossil Rim staff member since 2001, Johnson counts on a steady approach in the pursuit of strong APC production each year.

“It’s our goal at the start of the year to have a successful season, which means producing healthy APC chicks for the annual release,” Johnson said. “Some years are better than others, and of course we strive to do our best every year. Consistency and following protocol is the key to having a successful season. We learn something new every year and capitalize on what works.

“Having said that, it’s difficult to predict from one year to the next what underlying factors will come into play. Those that are problematic are the ones we have little if any control over.”

This year, it was Mother Nature providing some adversity.

“For example, we had an unusually wet winter and spring, which made it difficult to control bacterial growth at the nest sites,” Johnson said. “That had a direct effect on egg hatchability. Even with trying to keep things consistent, we have learned to accept that there will be some change from one season to the next. But, by working together as a team, we are able to overcome most obstacles, which allows us to keep moving forward.”

Regarding issues at the refuge, Morrow touched on positive and negative developments. Texas weather came up once again.

“After several years of research, we identified red imported fire ants as one of the major factors limiting survival of chicks produced by released birds,” he said. “We have expanded our treatment of fire ants on the refuge. Unfortunately, we have had catastrophic rains at the refuge three years in a row during the nesting and breeding period.

“That’s led to limited survival of chicks, but there’s nothing from a management standpoint we can do. Hopefully, we get good weather conditions in future seasons.”

According to Burch, Morrow prefers the APCs to be a certain size for the shipments, especially in terms of the ones fitted for radio transmitters to be large enough.

The wildlife biologist discussed the pickup days at Fossil Rim from his perspective.

“Fossil Rim staff bands the bird (on one leg), the vets do a quick physical assessment and treatment to make sure they are as healthy as possible leaving Fossil Rim,” he said. “We assess sex and apply a color band to indicate their year class. We measure the wing chord to scale body mass and index body condition, as well as index primary molt, which tells us about body condition and age. If it’s a female bird, we attach a radio transmitter.

“That helps us find nests the following spring to protect the chicks from predators and assess the brood. For each shipment, I usually pick up 30-40 birds.”

The metal leg bands applied by Fossil Rim staff are permanent, and each one has a number unique to that bird. This does not happen until the sex of the birds can be discerned. Males are banded on the right leg and females on the left.

According to Morrow, in addition to the 199 APCs from Fossil Rim to be released this year, there will be 100 from Houston Zoo, 25 from Abilene Zoo and 12 from Caldwell Zoo. Like Johnson and Burch, he stays focused on the big picture.

“It’s important to get as many numbers into the field as we can so we have as many nesting hens as possible the next spring, considering this species has such a high mortality rate,” Morrow said.

With just a couple of shipments remaining, Burch summed up what it was like to be on the backside of peak activity at the APC facility.

“J.J. and I can finally breathe,” she said. “The most rewarding part of our job to me is for Mike to come visit, pick up our chicks we’ve worked so hard for and drive off in the van to take them to the refuge. That’s when you see the process come full-circle.

“The birds that weren’t selected for release will be breeding birds next year. Moving forward in August, this is a time to focus on keeping everyone healthy and growing.”

Nowhere else they’d rather be

Burch recalls how she landed at Fossil Rim and what it is like to work with Johnson.

“In 2006, I came across an internship program at Fossil Rim, applied and got it,” Burch said. “I fell in love with the birds and Fossil Rim. In late 2008, I was looking for a job. When the opportunity came to take this position, it was a dream job.

“Working back here in the IMA, it’s quiet, serene and beautiful. I think J.J. and I are a really good team. We work well together, and I enjoy it.

“For example, when we go catch birds with nets for a health assessment, we both know what each other will do without necessarily talking about it. She has been doing this for a long time, and she’s a great person to learn from. She has guided me through everything we do back here.”

“I feel privileged to be able to participate with such a worthwhile conservation program and that Fossil Rim is able to contribute to this species in peril,” she said.

Like Johnson, Burch cites continuity as a key to success.

“I think there is a lot of stability in our APC program,” Burch said. “Consistency, as far as the people involved, is a huge benefit for Fossil Rim. These other Attwater’s facilities have so many people in their bird department. You always learn something new, but knowing what to expect means a lot.”