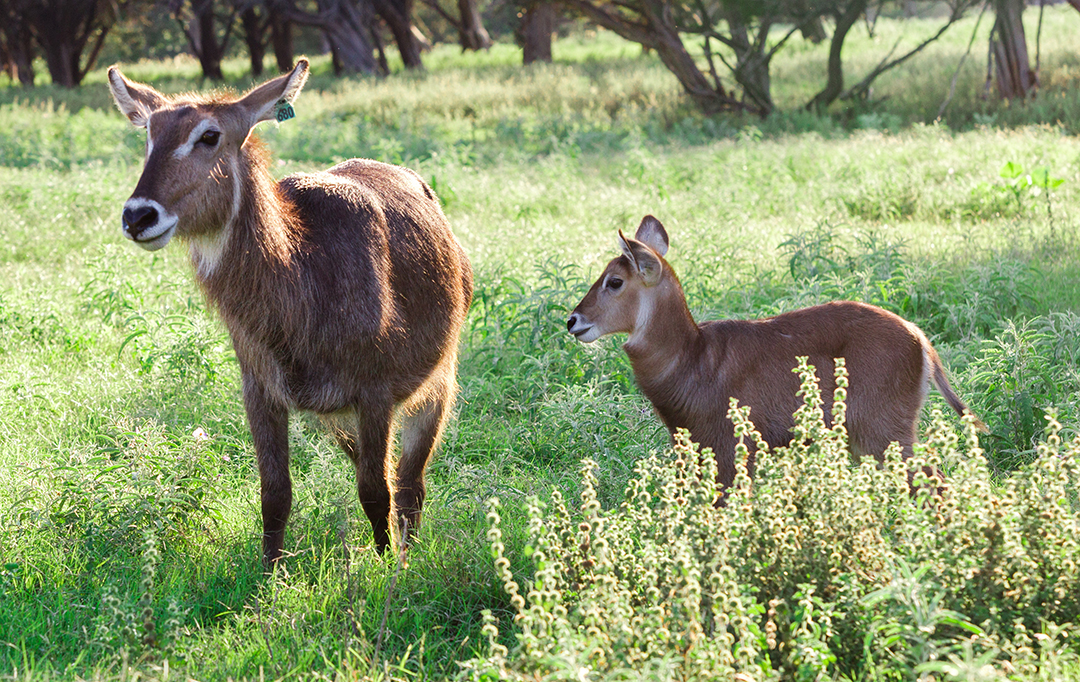 In the Front Pasture, he addressed wildebeest and scimitar-horned oryx. After 16 wildebeest calves were born in 2015, there have been 16 born this year. Eyres will keep watch to see when/if the herd bull ostracizes young males, but with several older females in the herd there is a chance all of the 2015 calves will remain in the Front Pasture.

Thanks to a tremendous job from the veterinary staff, the scimitar-horned oryx breeding bull overcame an injury to return to his herd. While they fall outside the realm of a hoofstock report, Eyres did share that there are four ostrich in the Front Pasture once again and he’s pleased to see them interacting.

Moving to the Buffer Pasture, he discussed bongo, kudu and addra gazelle. A new bongo calf was born in June and is doing well. A new breeding bull is set to potentially join the herd in late July.

There are four addra gazelle calves in the Buffer Pasture and they are doing well. A yearling male was removed from the herd, and he will be replaced by a new breeding bull in late August or September.

Progressing into the Main Pasture, Eyres turned his attention to gemsbok, waterbuck and addax. Fossil Rim currently has nine gemsbok calves. Four older ones spend time together, while the younger calves have only recently begun to come out into open view.

The wildlife center has six waterbuck calves currently – a figure that Eyres said is unmatched in recent years for this species. A new addax breeding bull was introduced to the herd at the end of June. While he has been at Fossil Rim for two years, this is his first breeding opportunity.

Regarding the Game Preserve, Eyres said a new Hartmann’s mountain zebra stallion recently joined the herd. Currently in a private pasture, the Grevy’s zebra stallion is with his herd and Eyres is hopeful to identify some pregnancies.

Veterinarians and rhino staff have drawn blood and collected feces to test for potential pregnancies in the white rhinos “M’Bili” and “Raka,” as well as the black rhino “Mupani,” which are housed in their respective yards and barns.

To learn more about all these animals, check out our Animal page.