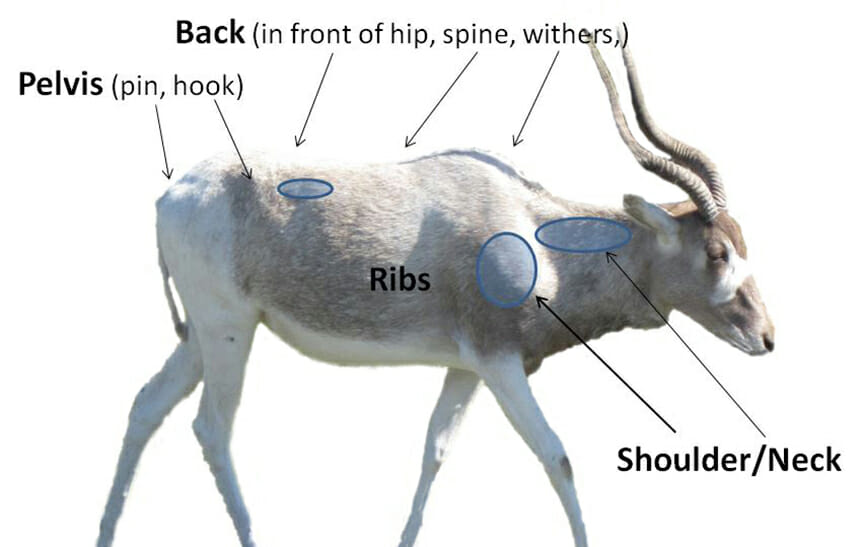 With more than 1,100 animals at Fossil Rim Wildlife Center – including approximately 900 hoofstock specimens – there is a lot to keep track of for the animal care and animal health personnel.

“For me, I’m normally talking with our interns about body condition assessments of animals at our Children’s Animal Center (CAC), such as goats and birds,” Swenson said. “That’s slightly different than the assessments for hoofstock out in the pastures.”

There are two types of BCS scales, and Fossil Rim utilizes one in particular.

“In veterinary medicine, there are two scales used historically to evaluate body conditioning: a five-point scale or a nine-point scale,” Swenson said. “Most institutions are moving to nine-point, so that’s what I talk with the interns about most consistently.”

Haefele mentioned why she prefers the larger scale.

“It gives you a more precise idea of BCS with nine points,” she said. “The five-point is too blunt of a tool for most animals: they’re considered super skinny, ideal or fat.”

Some animals receive a visual evaluation, while a hands-on assessment is used for others.

“Hands-on is better for certain animals such as maned wolves due to their long fur,” Haefele said. “For animals you can’t just score visually, getting a body weight is important.”

Scores from some combination of Haefele, Eyres and Swenson is always preferred to just one of them evaluating. While it seems like a subjective exercise, Eyres said that is exactly what he tries to avoid.

“The whole point of coming up with this system was so that it wouldn’t be subjective,” he said. “In the early stages, it probably appears more subjective than it actually is, but the visual cues we are putting together to determine score should be completely objective. The benefit of the nine-point system compared to five-point is that, even if there is some observer discrepancy, the difference between four and five is much less on the nine-point scale.”

“You hope that a consensus is reached for each animal, and having the same two people score every time gives the assessments consistency,” Swenson said. “Holly and I do them together when we get hands on an animal, or as a visual depending on the species. If only one of us is working that day, that person does the scoring alone. But anytime we do an immobilization or exam on any animal, we try to get a body condition score.”

A rating of five is ideal on the nine-point scale. Scores of one or nine are the extreme and thus rarely given.

“Some of those scores arise among our desert antelope or castrated or spayed animals. Another possibility would be too much food being offered or for some reason an animal is not getting enough exercise.”

Eyres pointed out that old animals are always low on the BCS scale.

“Most of the desert antelope species score pretty high since they are used to lower-quality forage than what is available to them here,” he said. “Captive animals tend to be in the higher BCS scores than their wild counterparts. I’m sure all that is dependent on a number of things in the wild – available forage, parasite load, predator abundance, rainfall amounts, pregnant or lactating females, males that are fighting for dominance, etc.”

Swenson expanded on the severity of a one or nine score.

“There’s a big difference between a two and a one,” she said. “An animal that’s a one is in danger of dying because it’s so skinny. There is minimal muscle or fat to keep it alive. The reason a one and a two might be mentioned together is that they both signify significant problems requiring action.

“It’s rare for one of our animals to get to a one, because hopefully we saw it earlier in the scale and examined it if it reached a two. A nine indicates extreme obesity where an animal is at risk of death because of it.”

Although not immediately life-threatening, a score of two or eight is always cause for concern.

“A two is a very thin animal to the point that we suspect a medical problem – it’s beyond a diet change,” Swenson said. “We need to check for parasites, a disease or bad teeth in an older animal. For an overweight animal scoring eight, we might suspect an endocrine problem that’s keeping it in an obese state, despite the fact that we’re feeding them an appropriate diet.”

A score of three or seven indicates an animal is not necessarily in trouble yet, but a correction attempt needs to be made.

“When an animal receives either of these scores, you get concerned that you need to make some changes,” Swenson said. “A three is thin enough that we should try a diet change and the same for a seven on the heavy side. Maybe that animal is not getting access to enough food and being pushed off by the other animals. We don’t usually consider these scores to be severe enough to be ruled a medical problem where we need to do a full examination.”

Haefele added that any animal deemed to have a health issue will be scored more often in the near future.

Though scores of four or six are noted, those aren’t the animals to draw the attention of staff members.

“One point from the middle is going to be slightly thin (4) or slightly fat (6),” Swenson said. “Those ratings aren’t a concern, because each animal has a normal range variation. So we wouldn’t necessarily adjust their diet.

Swenson explained the relative ease of making a correction for an individual animal compared to addressing an entire herd.

“If we’re dealing with individual animals at the CAC, for example, then we can adjust individual diets easily and then shoot for all of those animals to be in the ideal weight range,” she said. “As for the herd animals, that’s much harder to do because we can’t change an individual diet, only the herd diet. So it’s more acceptable to have a range of body conditions in a herd.

“You want the majority to be ideal (5 score), but you might have a couple of sixes that are the dominant animals pushing the others away from the feed. That might also mean a couple of fours that aren’t eating enough because they may be old or young, for example.”

She added that cheetahs and other Fossil Rim carnivores can be addressed individually in regard to their diets.

While the numbers on the scale represent the same level of condition for all Fossil Rim animals, body parts used to arrive at a score may vary.

“On birds, we’re feeling pectoral muscles,” Swenson said. “For flighted birds, we feel the keel, and for non-flighted birds we feel leg muscles. With birds, it’s more about feel than a visual.

“On hoofstock, we look at their shoulders, hips, spine and judge how much body fat or muscle is covering those areas. If the bones are easily visible, that animal is a little on the thin side.

“If we can’t see any ribs at all, they’re probably on the fat side. Each species may have different body parts evaluated, but we’re consistent in how we assess each species.”

A proactive approach instead of a reactive one leads to far fewer scores of one or nine so that healthy animals can help Fossil Rim effectively execute its mission for many years to come.

4 thoughts on “Look And Feel Lead To Healthier Animals”