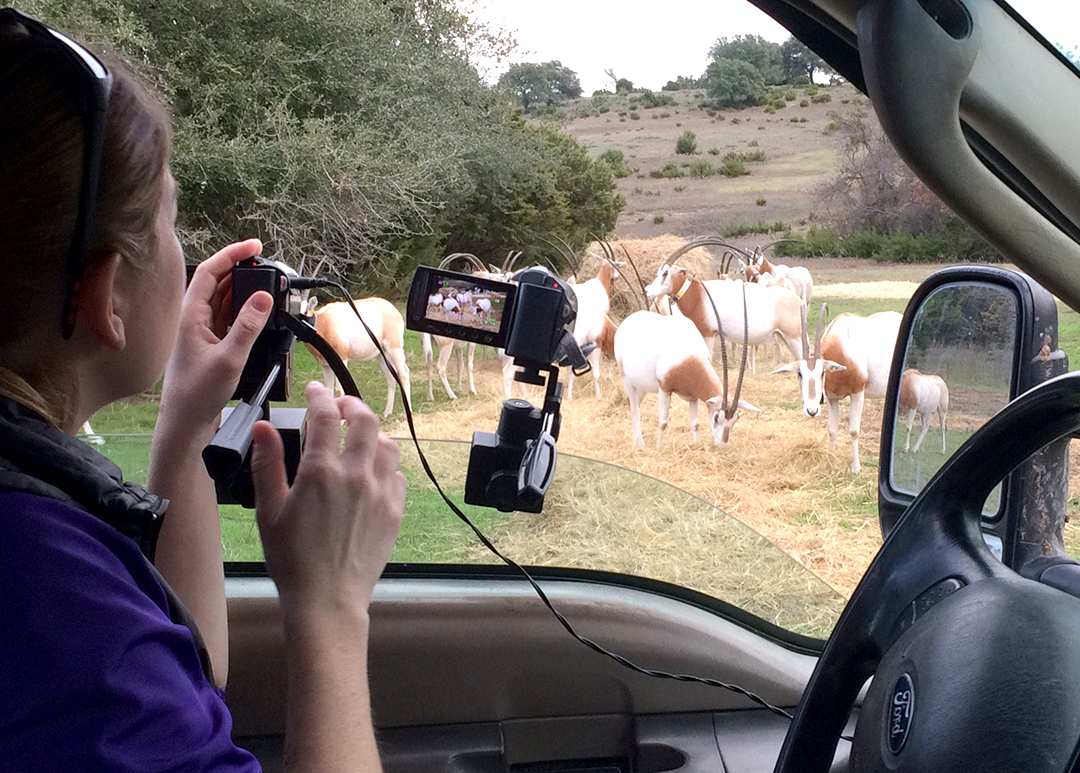 With scimitar-horned oryx declared Extinct in the Wild in 2000 on the IUCN Red List, the prospect of a reintroduction to their native Chad, Africa had interested parties across the world ready to pool their efforts.

However, such a significant undertaking required plenty of planning. In fact, a multi-month study was conducted at Fossil Rim Wildlife Center to determine if GPS collars were going to have a detrimental effect on newly wild oryx behavior.  That’s where Stephanie Cunningham, a hoofstock behavior research and husbandry intern, entered the picture.

The Bolingbrook, Illinois native arrived at Fossil Rim in late August 2015 and remained until May 2016 for a double internship, as she tackled a project entitled “Behavior of scimitar-horned oryx wearing GPS collars.”

Staying at the conservation center longer than most interns do, it was not her first time to experience Fossil Rim.

“I’ve known about Fossil Rim since I was a kid; I came here in 1999 with my family,” Cunningham said. “I remember seeing a post about Fossil Rim when I was in college looking for internships, so I always kept it in the back of my mind.”

She saw the logic in the selection of Fossil Rim to host the project.

“We have a good setup here with a captive herd in a semi-natural environment,” she said. “We had the (three) non-collared control animals for comparison, plus all these oryx are habituated to not reacting to cars driving by, so we could get a baseline for normal behavior.”

With a bachelor’s degree in zoology from Michigan State University, Cunningham has some previous experience in wildlife fieldwork and was able to call on support from Fossil Rim team members and offsite collaborators to conduct what was an intense study. She had completed a variety of prior internships, including experiences that took her to Namibia and South Africa.

“This internship appealed to me because I had some experience in field research and animal care, and this applied to both,” she said. “This is definitely the biggest project where I’ve gone through all the stages from studying design to doing all my own data collection to helping write the (research) manuscript. A double internship was definitely beneficial for this project, mostly because data collection spanned the fall and spring.”

Cunningham said she focused mainly on husbandry work during her first one-plus months at Fossil Rim, and then project planning got going in October.

“The main question was, ‘Would these GPS collars have a behavioral effect on oryx that needed to be taken into consideration before they were released into the wild?’” she said. “In general, the potential effects of GPS technology haven’t been studied in regard to animals very often, and if so it’s been more about survival or reproduction, because there’s often an assumption that behavioral results would be negligible. Over time, more studies are showing the collars do have some effect.”

Caribou were a species that experienced lower survival rate when collared, but in another study mountain goats had no change in survival rate after being collared.

Cunningham knew if her project did not unearth adverse effects that the GPS collars could prove effective for oryx.

“It is really cool to use GPS collars, because you can see where an animal is going without having to follow them around and possibly affect their natural behavior,” she said. “The collars are very effective for seeing large-scale movements of animals that may be cryptic, elusive or those that cover large distances in short amounts of time.”

She focused the project on the study of three objectives. First, she tried to determine long-term effects of the collars using five behavior categories and comparing them across three phases lasting approximately 33 days each: pre-collar, collared and post-collar. The behavior categories analyzed included alertness, feeding, locomotion, resting and social interaction, plus “out of view” if no behavior could be recorded.

Second, she sought to discover the long-term effects of the collars on grazing behavior by monitoring body condition score and measuring bite-to-step ratio, bite rate and vigilance. Third, Cunningham assessed the variation between individuals in short-term habituation by measuring rates of behaviors including discomfort and visibility.

She utilized an ABA study design.

“Each individual oryx was its own control with a baseline before and after the (collared) period,” Cunningham said.

Dr. Jared Stabach, Smithsonian Conservation Biology Institute (SCBI) postdoctoral research fellow, supplied the collars and arrived to apply them December 16, 2015. He was especially interested in potential differentiation between the performances of the two brands and ease of interaction with each company during the project.

“Jared used GPS data taken every 15 minutes for a given oryx in our pasture over time,” Cunningham said. “That allowed him to show the oryx movement using GIS software.”

“Jared’s experience applying the collars was key to the project, plus he made the trip to bring them personally,” she said. “Dr. Packard’s insight into the processes for research design and publishing has been really helpful. She was my research mentor for this.”

Michael Birt, Fossil Rim animal care specialist – hoofstock, was Cunningham’s go-to figure in the park for additional oversight. He helped her with the husbandry aspect of her internship, but also with the study design considering his own experience in that regard.

“Having Michael’s guidance was beyond valuable,” Cunningham said. “There were so many nuances of this project; I was grateful to have someone onsite that I could talk to about any issues, big or small, that may have come up.”

As for the collars, each one had a unique color of electrical tape and letter/number combination.

“We collared all six oryx in one day,” Cunningham said of December 16. “Part of that was due to the efficiency and experience of the Fossil Rim staff with immobilizations.”

Interested in the details of the December 16 collaring procedure? Read more here.

Cunningham observed the herd morning and evening, which included activity scans of one minute per oryx for one hour, as one of the five behavior categories was determined for each minute. Video recordings were made for analysis and scoring at her office.

“I spent a lot of time in my office analyzing the video,” she said. “When you add up all the hours, I spent about 11-and-a-half days observing these oryx. I had the video camera running for nearly everything I did, just in case. Grazing is too tedious to only observe live, for example.”

“There is some difference in the shape on each animal’s cheek and blaze, but even before I could recall those patterns I could notice the variety of darkness in their markings,” she said. “It probably took up to six weeks before I didn’t need to look at the ear tags at all.”

One brand of collar weighed less than the other, but both were under 0.75 percent of total body mass.

“A study found that zebras showed some differences when two brands of collars were under one percent like that, but my study didn’t find that to be an issue for the oryx,” Cunningham said.

Among the five behavior categories for the first objective, Cunningham found locomotion was the only activity to show statistically significant collar effect within the treatment phase.

“The two collared groups were both higher in locomotion than the control group,” she said. “It isn’t clear why. For some of these observations, you can’t pinpoint the reason and you don’t want to make assumptions.”

As for the grazing behavior for the second objective, only bite rate was affected during the collared phase. Bite rate was higher for three of the oryx.

“I was actually watching to see if bite rate would go down,” she said. “That was unexpected with no plausible explanation at this time.”

The third objective turned up no significant differences in discomfort index. Changes in visibility index may have been a result of the immobilization procedure during collaring, rather than an effect of the collars themselves.

Although not all data for the project was conclusive, Cunningham’s conclusions brought good news in terms of the reintroduction plans pushing forward.

“Despite some significant differences in grazing and activity, there was not enough evidence to suggest a negative long- or short-term effect of the collars,” she said. “Plus, the significant changes observed could have been a result of environmental factors like temperature and rainfall, access to smaller pastures and amount of supplemental hay.”

Had the project unearthed some significant causes for concern, perhaps at least the timetable of the reintroduction could have been compromised.

“If there had been some issues, I suspect that would have been discussed with the (Environmental Agency – Abu Dhabi) and all involved in the reintroduction to determine best course of action,” said Adam Eyres, Fossil Rim hoofstock curator, considering Abu Dhabi is where the world herd is being built for the reintroduction to Chad. “I can’t say if it would have been postponed. The main goal of Stephanie’s project was to determine if there would be negative effects of the collars, what behaviors should be considered normal as a result of the collars and what behaviors the researchers should be looking for on the released oryx.

“We also wanted to confirm that if there were effects, those effects would go away and the animals’ behavior would return to normal. Fortunately, her study did all of those things and we feel confident that the collars won’t negatively affect the reintroduced animals. There will be further observations of the collared animals in the pre-release pens for about three weeks prior to opening the gates.”

Cunningham presented her project to Fossil Rim staff, volunteers and fellow interns two days before her time at the wildlife center concluded.

“Working with the staff here has been very good,” she said. “It’s been really great to work with so many different people, both here and outside Fossil Rim, to get that collaborative and networking experience.”

“From here, I’m headed to an internship at SCBI,” she said. “I want to get my master’s degree, but there are so many things I’m interested in. Up to this point, I’ve mainly just been trying to gain experience.”

While Cunningham’s career path is still being paved, her diligent effort with GPS collars on scimitar-horned oryx may help a species that has endured great hardship return to prominence in its homeland.

1 thought on “GPS collars assessed ahead of oryx reintroduction”