Two pairs better than one for black rhino 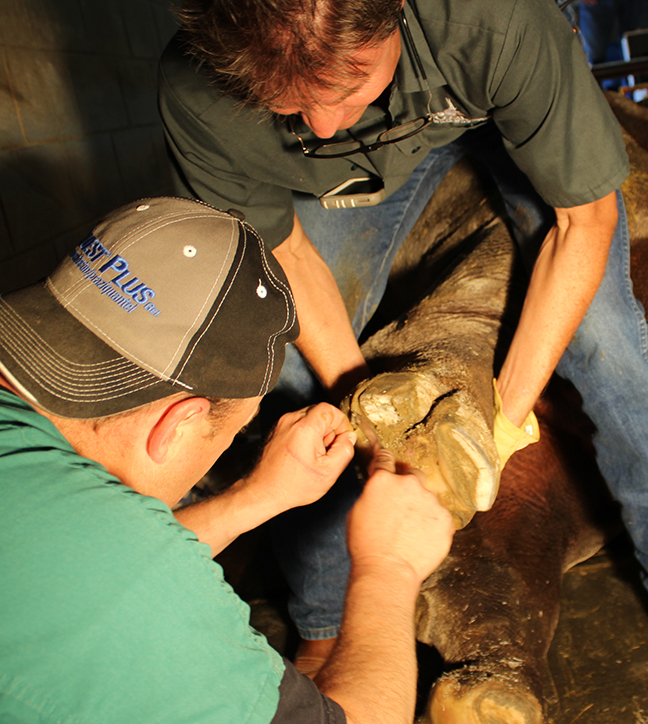 The custom-made footwear courtesy of Diceros Boots LLC has helped Fossil Rim Wildlife Center’s southern black rhino “Coco,” but a 2,000-pound rhino wears through its sneakers faster than a 200-pound human. These are prototype boots for Diceros, however, and to the benefit of Coco each pair improves on the design of the previous model. When one of her shoes does exhibit wear, the foot can be exposed to dirt and debris, which sets back the ultimate goal of healing her feet.

In order to help her feet mend, Coco needs the boots on continuously so her feet stay clean and dry. In late March, Coco had her third pair of boots put on, and she has a fourth pair on standby at Fossil Rim thanks to Diceros Boots LLC President Christine Bobko and Engineer Brian Teasdale, who live in Denver.

Having the next pair of boots ready to go is a significant development, especially since Coco is having slightly more issues with her feet than before.

“We just have to keep trying to help her feet improve,” said Dr. Holly Haefele, Fossil Rim director of animal health. “That’s why we have a second pair of boots ready to go, so now we don’t have any lag time (without boots). I’m hoping the (third pair) lasts two weeks, and then we’ll put another pair on right away.

“Hopefully that gives us a month of her feet being protected. My (long-term) goal is to have her not need boots, but for now we need them on for an undetermined amount of time to aid healing.”

“Coco definitely demonstrated more lameness in the right front than last time,” he said. “We suspect some of that is due to the lesion that she’s had, but now she also has a (couple more inflamed areas) that may be contributing to the issue. It remains the primary foot of concern. The left front looked fairly good and improved.

“It went from a deep lesion to one that cleared up pretty well with less inflammation. She had a new lesion in the lateral toe on the right hind foot.

“She didn’t demonstrate lameness on that foot last time. The left hind foot is inflamed, but it’s definitely in the best condition of all her feet right now.”

Coco was not sedated as deeply as she was when the previous boots were applied, so the animal health staff kept an especially close eye on her.

“I added Guaifenesin to her IV this time because we didn’t sedate her as deeply, and so we had to watch closely to make sure she didn’t begin to gain mobility, but also not feel pain,” Haefele said. “When we started debriding those lesions, she reacted, so it was a good indication she needed further sedation. Coco was a great anesthetic patient once again.”

At each Coco procedure, there are new faces helping out. This time that meant guests from the Cameron Park Zoo staff.

“They were interested in coming up to assist in the procedure, and if zoo personnel are interested they can come get the experience,” Haefele said. “And we can always use the help of another vet and experienced animal care folks.”

“Rather than letting the boots disintegrate on her feet, we want to get them off when we see minor repairs are needed and get the fourth pair on that we already have here in the meantime,” Smith said. “We feel like having two pairs on-site now will allow us to maintain the quality of both pairs more effectively. We have the materials to make minor repairs, so we hope to extend the life of each set of boots for Coco’s sake.

“If we can’t repair them on-site, I’ll ship that pair off to Christine and Brian. They take about two weeks to make per pair, so we’ll try to avoid her being without a pair again.”

Smith discussed how these new pairs differ from the previous model.

“Christine and Brian changed the Gore-Tex portion to beige instead of black, considering it’s going to start getting hot in the summertime,” he said. “They are using a different adhesive between the urethane (sole) and the silicone (upper) that binds these two materials, and all the stitching remains covered by urethane. They changed the belt system slightly, switching from a buckle to a D-ring to tighten the industrial-strength Velcro down. That area can now be opened up for easier access to adjust the fit.

“The silicone is distributed more evenly throughout the boot. In general, the production process for the boots is similar to what it has been.”

Although they reside in a different state, Bobko and Teasdale receive constant input from Smith about potential ways to improve on future boots.

“Christine and Brian usually sit in with me on a phone call, and I share the ideas from Fossil Rim on how we think the boots can be fixed or improved,” Smith said. “Then, they share feedback, as well. Brian knows what materials might be good potential options when we discuss changes. I share my observations on what I’m seeing with the boots as often as possible, plus I take videos and pictures daily so they can see the wear points for themselves.”

The Diceros company is picking up steam, as more people have discovered its efforts for Coco.

“Their company is expanding based on exposure they received regarding the earlier boots made for Coco,” Smith said. “They are in the development phase of boots for a few species, including equine and canine lines. Chris and I have known each other for nearly seven years.

“We’ve become better friends while trying to help Coco, and we both serve on the (International Rhino Keeper Association) board, so it’s been fun to keep track of what’s going on with their company. I’ll definitely do anything I can to help.”

Smith is hopeful that allowing Coco more room to roam will help the rhino regain her footing.

“The day after this latest procedure and having talked with everyone who is part of her care management, we decided it was in her best interest to let her into her full yard so she’ll be on grass, as opposed to potentially mud during rainy days,” he said.

Although she did not like to discover Coco’s lack of progress with some feet, Haefele remains determined to see the rhino turn the corner.

“We’ve never had trouble with her rear feet, so that’s unfortunate along with some new lesions on her right front,” she said. “We’re hoping that getting her out in her (full) yard will help. Similar to a horse, overcompensating for one foot can lead to trouble for other feet. We’ll just see how things go, and we’re going to work to get her improving once again.”

As the third and fourth pairs of Coco’s boots are being put to the test at Fossil Rim, Bobko and Teasdale stay focused on the future.

“They’ve started on the fifth pair, and I hear that it’s more of a summer boot with a bit of a different style,” Smith said.

Bobko shares the steadfast mindset of the Fossil Rim staff when it comes to Coco’s condition.

“Our top priority is to help ensure that Coco heals from these foot issues, and secondary to that she is helping us refine a product that may not only help other rhinos, but pachyderms and other animals with serious foot issues,” Bobko said. “She has come such a long way, and we will not give up until we figure this out for Coco and Fossil Rim!”