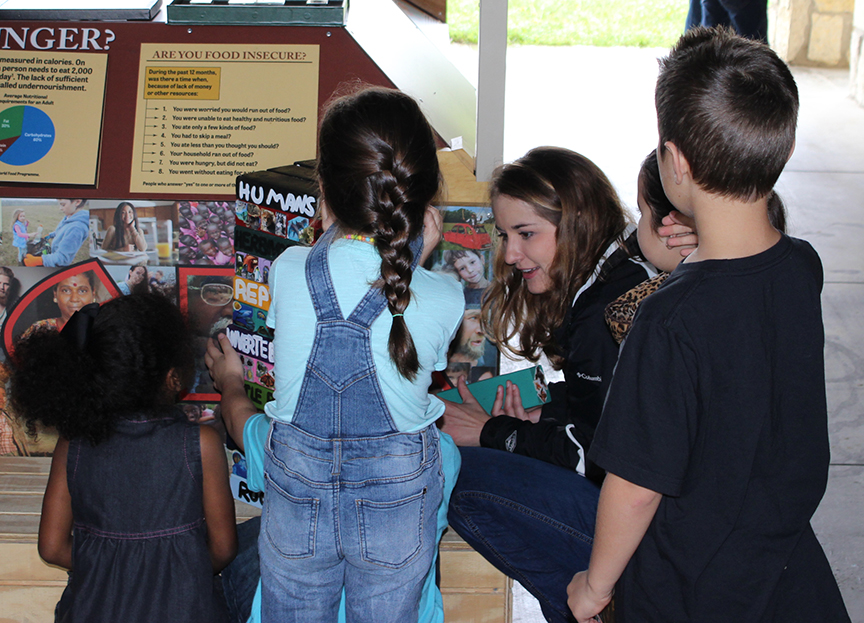 Like anyone else working at Fossil Rim Wildlife Center during Spring Break, the education department interns had to step it up a notch.

Fortunately, college graduates Christine Lewis and Megan Woodall were up to the task and then some, as they informed visitors young and old about everything from Fossil Rim’s animals to its mission when they arrived at the Admission Office.

“Throughout Spring Break, we’re focusing on biodiversity, so we have some different things to represent the importance of everything in the ecosystem,” said Lewis, an Oregon native. “We have a large Jenga tower that has blocks representing aspects such as rocks, air, minerals, soil, water, plants, animals – and it goes all the way up to humans. It shows that if you take different items out, everything becomes less stable, and so they are all important.”

“We have a lot of different insects on display that are beneficial and helpful,” Lewis said. “A lot of people may think that the ‘creepy crawlies’ aren’t as important, but they really are, so we try to highlight that.”

A black rhino skull was a dependable source to attract the interest of visitors.

“We have a rhino skull, because most people know why rhinos are important, and if they don’t we explain that,” Lewis said. “The rhino skull grabs people’s attention when they walk up; it’s interesting. We also have some horns and antlers that can be tough to identify, so they are more good teaching tools.”

If their enthusiasm and ever-present smiles did not make it obvious, these ladies have enjoyed their Fossil Rim experience thus far.

“Becoming an education intern was a great opportunity that’s been really neat,” said Woodall, who hails from South Carolina. “I’d been doing a lot of animal care internships, but then I wanted to get some education experience.”

“It’s a lot of fun to teach these kids about Fossil Rim,” Lewis said. “I do enjoy it.”

The interns had the benefit of utilizing some impressive items created with recycled materials, including a small car made of aluminum cans, a bowl created with colored wire, a purse crafted from woven plastic bags and a colorful necklace composed of recycled paper.

“Those items are really cool,” said Woodall. “It’s awesome to see how you can use recycled materials like paper to make a necklace or the recycled Walmart bags to make a purse. It’s a neat way we use resources to interest our visitors and show them how they can take part in our conservation initiative.”

“Those recycled items help us explain some ways that people can do their part to help maintain biodiversity,” Lewis added.

“I have a lot of experience coaching volleyball, so I already knew that I love kids and working with them,” she said. “It’s awesome to witness them excited to learn and grasping these concepts we’re trying to convey to them.”

While this was a key contribution by the interns, as Woodall estimated they educated well over 300 children on March 15 alone, much more is on their plate as well.

“We work with the camps, interact with the public at the admission building during other functions, plus we’re writing our own programs for the education department to focus on what we’re interested in,” she said. “We recently started writing articles for our e-zine newsletter that is sent to homeschool students. We are also responsible for doing a larger project that reflects our personal interests, whether it’s making a new hiking trail or building an insect hotel, for example.”

It helps to have the support of Fossil Rim Education Director Tessa Ownbey and her staff, which includes Mark Phillips, Katie Hunholz and James Morgan.

“It’s a really encouraging work culture here – very positive,” Woodall said. “You can tell they really care about us, not only as interns, but as people. They want what’s best for us, so they put us in a position for growth and improvement.”

With Woodall having earned her college degree in animal science and Lewis having spent her collegiate years working toward attainment of a biology degree, the future is promising for these two.

“We are both very interested in education, and we both have animal care experience,” Lewis said. “We are still in the process of figuring out exactly where we want to go with what we’ve learned, but we have a general idea of what we love to do.”

Ownbey did not mince words in terms of her intern evaluation so far.

“Christine and Megan are rocking it!” she said. “They are excellent interns for our department.”

If past results are any indication, their selections to join the Fossil Rim team bode well for a bright future.

“Over the years, we’ve had many education interns who did a great job here,” Ownbey said. “It is nice to impart knowledge to them and hopefully impact their lives. We have interns who have gone on to work in zoos and aquariums across the country. We also have one at Aldo Leopold Nature Center, one at Rocky Mountain National Park, two who currently work in our own education department and one at our Children’s Animal Center.

“One is in administration at the Dallas Zoo, while another is doing whitetail deer research in Missouri. Some have gone on to become public school teachers. Two have become powerful environmental activists working on relevant legal issues.”

Ownbey cherishes the opportunity for her department to interact with large numbers of visitors.

“It’s very important to us to inform visitors of what we do at Fossil Rim, as well as all kinds of nature-related issues,” she said. “This Spring Break, we’ve been focusing on teaching people what ‘biodiversity’ means.”

The education department will host an Earth Day Celebration at the Overlook April 23 from 10 a.m. to 3 p.m. and encourage guests to join them for this free event.