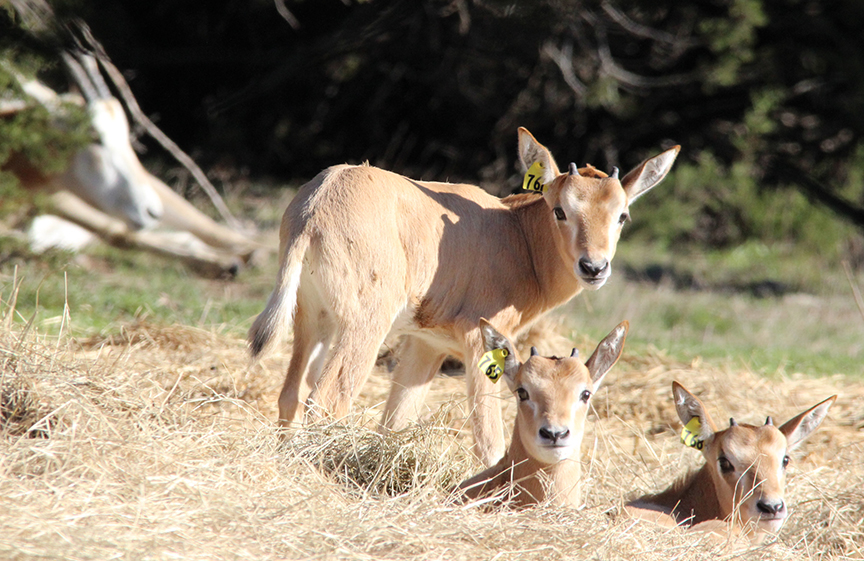 Visitors who partake in the Scenic Wildlife Drive at Fossil Rim Wildlife Center love to catch a glimpse of baby animals, especially in the springtime, but in the big picture these youngsters serve a far more important purpose.

Conservation – and ideally, reintroduction into the wild – is the name of the game at the core of Fossil Rim’s mission.

“We’re consistently a top-three production center in North America for cheetahs, we are the top producer of Attwater’s prairie chickens (APCs), plus we are a strong producer of addax, scimitar-horned oryx (SHO), Arabian oryx, addra gazelle, sable antelope, Grevy’s zebras and others,” said Kelley Snodgrass, Fossil Rim chief operating officer. “We strive to maintain viable insurance populations of selected wildlife according to the natural history of a species and within Fossil Rim’s environment. It is not about how many different species we work with, but rather working as well as we can to make a meaningful impact toward the continued existence of the species we do oversee.

“For us, it’s about a long-term, sustained endeavor. The end will never come for our efforts with most of these species, because natural habitats are generally getting smaller, not larger. The lists of threatened and endangered species are not getting shorter; they are getting longer. We must have source populations to accommodate reintroduction into the wild, as well as ensure they continue to exist for many years to come.”

When many people hear “circle of life” they will think of the song from the Disney movie, but at Fossil Rim that concept is in motion throughout the park’s 1,800 acres every day of the year.

“No matter what species we’re talking about, these animals were put on this earth to reproduce and keep their species going,” Snodgrass said. “That’s what we try to give them an opportunity to do here. Sustainably managing wildlife is a very dynamic process – animals in, animals out.”

While spring is a safe bet to spot some young animals at Fossil Rim, certainly there is a wide variance during the year based on species.

“Some species have a specific birthing season, such as nearly all deer species,” he said. “The axis deer is the one deer species in the world that will breed, and therefore have their fawns, at any time of the year. While our other hoofstock can calve year-round, in 2009 we developed a hoofstock management system where we try to get some species to give birth at a specific time of year.

“Generally, late winter or early spring births mean calves are demanding the most milk during our best forage season from April through June. This timing also avoids births during the coldest period of the year.”

Snodgrass pointed out that, while the hoofstock herds need the constant presence of an adult male, it is not always the same male as the months progress for some herds.

“You take our sable herd, for example,” he said. “The bull performs a certain patriarchal influence over the herd, especially for the juveniles. Providing protection and discipline, he fulfills a social component. You want a mature bull with the herd all the time, so we’ll have a vasectomized male out there during the periods of the year we don’t want breeding.

“Then, we have an intact (fertile) bull we keep in one of our back pastures. During the breeding window, we switch them out to create a calving – and then nursing – window for the most appropriate times of the year.”

When the unpredictable nature of things provides a hurdle, the animal care staff adjusts.

“Occasionally, something can happen where your breeding bull is unable to deliver the desired results during the scheduled time frame, and that can throw the breeding window off schedule,” Snodgrass said. “Our sable herd got off schedule in early 2016, but our addax and gemsbok, for example, were right on time.”

For some species, there is a more flexible breeding window for specific programmatic reasons.

“With our SHO and Grevy’s zebras, we aren’t employing the same breeding window simply because we’re trying to produce a lot of babies,” Snodgrass said. “Specifically for the SHO, it relates to the project we’re supporting for their reintroduction by the United Arab Emirates into Chad.”

Gemsbok and addax each began to calve in late February, as they followed the birth of the park’s SHO.

“Considering that’s a species extinct in the wild, SHO calves are very precious,” Snodgrass said. “The adults are a unique-looking animal with long, sweeping horns carried by both males and females. The recently born calves have a different (tan) coloration than that of the adults (white body, red neck).

“The females hide their calves for the first week or two and the calves’ color helps camouflage them in the grass and brush. Some of the calves are beginning to come out of hiding, and visitors might see them as they go through Fossil Rim.”

As for some of Fossil Rim’s carnivores, reproduction for red, maned and Mexican gray wolves is seasonal with one window of opportunity per year like the park’s APCs.

“Cheetahs will breed year-round, but typically we intentionally don’t have any winter cubs,” Snodgrass said.

The topic of gestation at Fossil Rim has a wide range of time frames.

“For rhinos, the gestation period is about 16 months and for giraffes it’s 15 months,” he said. “On the other hand, it’s about 93 days for cheetahs, 64 days for wolves and a 26-day incubation period for APCs. A wildebeest calf is able to walk nearly as soon as it is born after a nine-month gestation because that’s a highly nomadic species in the wild.”

While those wildebeests literally hit the ground running soon after birth, most of the park’s other species are more vulnerable at that stage and rely on hiding behavior and camouflage. For hoofstock species that hide their calves, it gives them time to develop mobility.

“Cheetahs are a good example of vulnerability after birth,” Snodgrass said. “You are pleased with every week they survive, and then after a month or two you can be more confident. Disposition of the mother can play a big part. Some individual animals are more maternally successful, while others are marginal or even poor.

“APC chicks are another good example of being very vulnerable early on, and with each chick being so critically important for the recovery of the species, the avian and animal health staffs do all they can to ensure the survival of as many as possible each year. In 2015, the recovery program was able to release the largest-ever number of APCs (nearly 500 birds) onto the Attwater Prairie Chicken National Wildlife Refuge.”

The APC facility even has generators on standby, because a power outage on a cold day could otherwise prove very detrimental to the program.

As someone would likely surmise, proper nutrition is crucial for Fossil Rim’s newest additions.

“Nutrition plays a huge part in the lives and success of all our animals,” he said. “If you get any animals off on a poor nutritional plane, something will suffer. The importance of nutrition can vary based on the stage of an animal’s life and whether or not they’re producing offspring.

“Regarding mammals, you must consider if they are lactating to rear the offspring. Different ages and various life functions can demand diverse nutritional requirements.”

As an example, APC chicks not only receive specially formulated pelleted food with an array of ingredients – including specific macro and micro nutrients, they also eat insects and a finely chopped vegetable salad featuring many different components.

All births or hatches, and especially those in the springtime due to the volume, raise the stakes for the animal care and animal health staffs.

“We’re really trying to ensure the survival of each species,” Snodgrass said. “Therefore, we place a high premium on the successful production of offspring. That helps maintain the groups that we have and then extrapolates out to boosting the broader metapopulations of the species we work with.

“The APC facility during chick season is a great example of the intensity of our efforts in animal care. Our APC specialists (Avian Curator Janet Johnson and Senior Avian Specialist Cara Burch) apply a level of expertise and go all-out, seven days a week, day and night. When a cheetah mother is pregnant, our cheetah staff (Carnivore Curator Mary Jo Stearns and Senior Carnivore Specialist Jason Ahistus) considers her disposition – does she need a quiet place, where is she most comfortable when having these cubs?”

There is a lot to consider for Fossil Rim’s numerous hoofstock species, as well.

“When our hoofstock start having calves, the hoofstock staff members (including Hoofstock Curator Adam Eyres, Senior Specialist Justin Smith, Specialist Molly Shea, Specialist Michael Birt, Specialist Rebecca McLachlan; Animal Care Specialists and Children’s Animal Center Supervisors Kristina Borgstrom and Amber Wiedeman; as well as Animal Care Support Arnulfo Muro) keep in mind that the calves are important, but so are those mothers,” Snodgrass said. “If any of them are in trouble, we want to know about it. You can lose a calf and lose a year. If you lose an adult female, you lose all of her remaining production years.”

The animal health staff is no different in the spring, as director Dr. Holly Haefele, Dr. Julie Swenson and Licensed Veterinary Technician Lindsay Cosmi buckle down and give their all to 1,100 Fossil Rim specimens.

“The animal health department also definitely steps it up when babies are born,” Snodgrass said. “Cheetahs and wolf species require scheduled vaccinations, plus with the start of APC production season there’s a visit to that facility twice a day in order to care for chicks that require additional support. For hoofstock, we do neonate exams, because we want to get tags in their ears and even transponders on some for permanent identification – often to support genetic management reasons.”

There is undeniably a mountain of work to be done and sky-high stakes.

“We are so very proud of the team that it takes to care for so many animals,” Snodgrass said. “And we also know that all Fossil Rim staff, interns and volunteers play a huge part of this organization’s conservation mission. We recognize that each visitor or supporter becomes a conservation partner in supporting our mission.”

The animals rely on a knowledgeable, caring staff in order to flourish.

“Obviously the land itself provides a fantastic environment for these animals,” he said. “But make no mistake – these programs would not be successful if not for the staff. These people go way above and beyond, year in and year out, through holidays and bad weather. They are the experts.”

2 thoughts on “Baby animals spring to life at Fossil Rim”