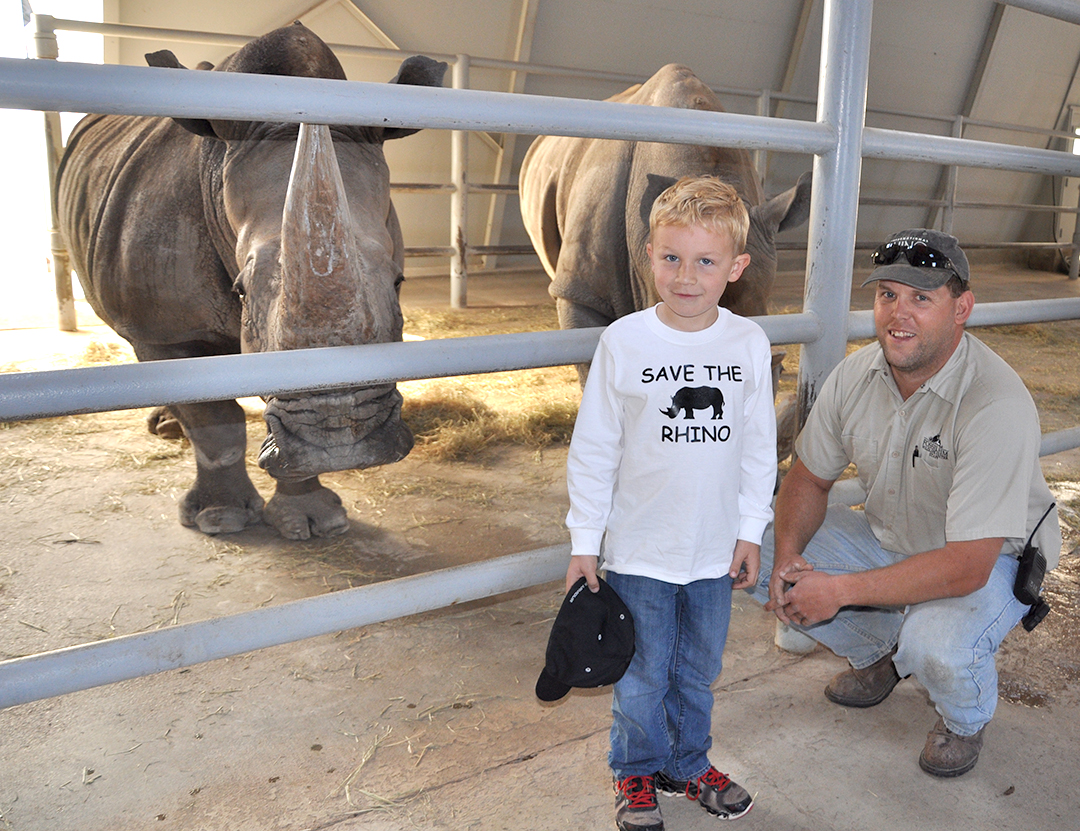 When each student in his Glen Rose Elementary kindergarten class was assigned a different zoo animal to research, little did six-year-old Judge Woodley realize how fortunate he was to hear his teacher tell him “rhino.”

Flash forward and Judge found himself with the opportunity of a young lifetime at Fossil Rim Wildlife Center. He was granted a visit with Justin Smith, Fossil Rim senior animal care specialist and lead rhino care specialist.

“His assignment was to do a presentation about rhinos in his class as they prepare for an upcoming zoo trip,” Smith said. “I think he might have been slightly overwhelmed, because after we met and he interviewed me he was able to meet some of our white rhinos up close. If I look at it from a six-year-old’s perspective, I think it’s something he’ll never forget.”

Before presenting to his class, Judge gave quite a positive preliminary report.

“I got to go see the rhinos up close and see how big their horns were; they were huge,” he exclaimed. “Justin told me all kinds of stuff. He told me they weigh 5,000 pounds, and he told me they’re endangered for their horns.

“He told me a group of rhinos is called a crash, and they can run 25-30 miles per hour. I think it was cool to see and learn about them.”

“I tried to emphasize to Judge about the conservation aspect of what we do and explain how poaching is decimating the wild populations of rhinos in terms that he would understand,” Smith said. “It is very rewarding to see there are future generations excited about rhinos. At the age of six, Judge is already aware of the huge conservation need to ensure that rhinos will be around for generations to come.”

One of several Fossil Rim staff members to be interviewed by students at Glen Rose Intermediate in October, Smith already knew he was interested in a similar interaction – this time at Fossil Rim instead of on school grounds. At the direction of art teacher Jeff Gottfried, intermediate students have engaged in a variety of Fossil Rim-themed projects with incorporation broadening into the curriculum of other teachers in the school over the course of the 2015-16 school year.

“I was open to doing this because I know that we have to get the youth interested in conservation at an early age,” Smith said. “This was a great opportunity. Just about every animal care person I have met will tell you they got into the field to take care of animals in order to get away from working with people, but the truth is our jobs are also about educating ourselves and those around us. I take advantage of any chance I have to stop and chat with our visitors to make sure they drive away knowing more than when they drove in.”

According to Judge’s mother, Ashley Woodley, the visit and the insight he gained remains at the forefront of his mind.

“He loved every second,” she said. “He gets my phone and watches the videos I took of him talking to Justin repeatedly.”