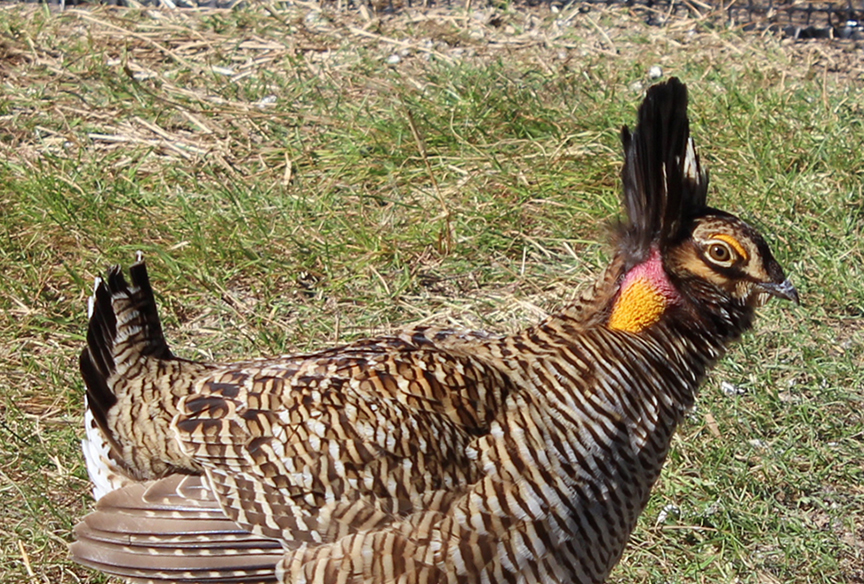 When the last Attwater’s prairie chicken (APC) census was performed in April 2015, there were believed to be approximately 320 birds on Earth.

As the time arrives for the 2016 population assessment of this endangered species, that figure will have risen if Fossil Rim Wildlife Center’s Janet Johnson, avian curator, and Cara Burch, senior animal care specialist, have anything to say about it. After all, Fossil Rim is the leader in chick production among all participants in the APC Recovery Program.

“I don’t have a feel for how many APCs are on the (Attwater Prairie Chicken National Wildlife Refuge) right now, but there were 320 birds total between the captive and wild populations during the last census,” Johnson said. “The numbers on the refuge fluctuate throughout the year as facilities do releases, but I do believe the total number of birds has increased. We try to learn from our mistakes and make gains every year.”

Although chick production does not reach the same heights each year, these ladies must stay the course with so much on the line for a species.

“We try our best each season and hope for the best,” Burch said. “You can’t get discouraged. Without the captive breeding program, the birds would already be extinct in the wild. We always believe we will do better next year and try to stay positive.”

As of Feb. 9, the bloodwork results for most of the 61 APCs at Fossil Rim were still pending, and the full story on that health assessment process can be found here. The duo plans for 24 breeding pairs each year.

“We have been able to form several breeding pairs after their results came in,” Johnson said. “We should have all the results before late February to form the remaining pairs.”

In regard to a set goal of egg production this season, Johnson prefers not to assign a certain number.

“We just try to get as many eggs as we can, and the more the better,” she said. “Egg production varies from one hen to another, and we estimate each hen will produce approximately 15 eggs.

The rest of February will be about setting the remaining breeding pairs. Johnson and Burch will be out in the park during Spring Break helping monitor visitors, so their time will be divided between that and caring for the captive flock at the APC facility inside the Jim Jackson Intensive Management Area. By late March, egg production will begin and then APC season will be in full swing by mid-May.

“Over the next several weeks, we’ll be monitoring the adults to see which roosters are displaying,” Johnson said in regard to “booming,” which is an intense visual and audible courtship display. “If hens aren’t happy where they are, they have a tendency to pace. We’ll try to relocate a hen to make her more comfortable, which means pairing her with a different rooster.

“We have to make sure the change in pairing still allows for the viability of the offspring. From there, it’s on to egg production.”

As for the coming days, however, it’s still about pen preparation for Johnson and Burch.

“We’re going into the pens, making sure there is enough cover for the birds with the bluestem and cut Ashe juniper branches,” Johnson said. “We make sure all the flights are in good condition with no tears or holes in the netting.”

Regarding the pens within the flight, each one has a water dish and a half barrel covering the food bowl, as well as a three-sided shed to protect the birds from wind and rain.

“The bluestem provides great cover, and they can actually hide under the base of it,” Burch said. “We like to use it in the pens because that’s what the birds like. We let it grow and have transplanted it to pens that didn’t have it.”

“If the hens feel secure in the pen, then there is a chance they’ll produce more eggs,” Johnson said. “If a hen is agitated or doesn’t feel comfortable where she is, obviously she’s not going to perform well.”

APC nests are effective, but quite different from the design associated with most birds.

“Hens will choose their nest site for cover and protection, so it’s usually around a clump of bluestem or under a bush,” Johnson said. “They ‘scrape out a bowl.’ Hens make an indention in the soil, pull some vegetation around it and deposit their eggs on the ground.

“Their nests are very difficult to see, so they do a very good job of picking a location for camouflage. I think they do put a lot of energy into their nest site; it’s just not typically what you think of when you envision a nest in a bush or a tree.”

There are two levels of netting atop each flight to protect the APCs from aerial predators, plus there is an electric fence around the low perimeter to guard against carnivorous mammals and snakes.

Differences may be subtle day to day, but things are changing in the APC world as the weeks progress.

“Right now, the males are just talking to each other with more of a cackle for the most part,” Johnson said. “We do have a couple who are booming, but they only do it in the early morning or late afternoon. Soon, the roosters will be displaying for most of the day.”

“Not just the frequency of booming, but you’ll see a change in their color from pale orange to the bright orange (with their throat air sacs and eyebrows),” Burch said.

The daylight hours play their part in APC behavior.

“I don’t think the temperature affects them as much as the photoperiod, which involves the days lengthening,” Johnson said. “That’s a signal to them it’s getting close to time for reproduction.”

The nutritional considerations for captive APCs are numerous.

“The adults eat a pelleted mixture,” Johnson said. “The APC Recovery Team and Fossil Rim collaborated with the Fort Worth Zoo Nutritional Department in 2004-05 to come up with a formula that suits the needs of the prairie chicken, which was submitted to Mazuri Exotic Animal Nutrition. They created a pellet specifically for an APC breeder diet, and another for a chick-rearing diet.

“We supplement the pelleted diet with frozen, thawed vegetables, which are more of a treat for them rather than an actual nutritional requirement. They really like vegetables, so it’s a good way to get them to come to us for an easy visual health evaluation.”

A diverse nutritional approach is even more important for APC chicks.

“The chicks also receive a specially formulated pellet, but it is different both in size and in terms of ingredients,” Johnson said. “Along with the pellets, they get a variety of vegetables from kale to collards, romaine lettuce, carrots, apples, peas and green beans. It’s all chopped very finely.

“They also get insects such as mealworms and crickets. Chicks are fed four times a day early on, and the frequency is reduced over time.”

The chicks also receive probiotics that dissolve in their water.

“APCs have different needs in terms of nutrients depending on their age, and that’s all formulated into their diet,” Johnson said.

All the APC-related activity is currently in the adult flight pens, while a building called the “old breezeway” is consistently in use for washing dishes in addition to storage of mealworms and other feed, according to Burch. Not all of the APC facility is utilized at all times, however.

“Right now, the chick building is inactive and the incubation building won’t start up until March,” Johnson said.

Johnson was pleased to mention the addition of a backup generator in 2015 that can keep the chick building heated in case of a power outage. Spring storms could be a threat right when the building is needed most. The incubation building already had a backup generator.

Other people aren’t often around the APCs at Fossil Rim, but when they are, precautions must be taken.

“APCs are sensitive to noise, color and activity from multiple people,” Burch said. “They don’t like brown, black, red, orange, yellow or florescent colors. Safe colors are neutral and calm, such as beige or blue.”

“They do seem to recognize individuals,” Johnson said. “An unfamiliar person can agitate them.”

Any person entering one of the buildings or the flight pen area must dip their feet in a disinfectant to prevent transmission of avian diseases. Just as the APCs need protection from predators in captivity, they face numerous threats in the wild.

“Hawks would be their biggest predator, but of course everything wants to eat a prairie chicken,” Burch said. “So you have coyotes, skunks, raccoons, snakes and just about anything you can think of.”

There is also a particularly problematic insect to consider.

“The APC National Wildlife Refuge is working to address the imported red fire ant and keep its population down,” Johnson said. “They affect nests and, more importantly, the insects the broods need to survive.”

“The refuge has seen success with its treatment programs to increase brood survivability in treated versus untreated areas,” Burch added. “Hopefully, they can keep the funding to continue to treat for imported red fire ants.”

The stakes are high for Johnson and Burch in the months to come.

“People routinely ask us if they lay eggs year-round like domestic chickens, and that’s not the case,” Johnson said.

“Their breeding is seasonal, so we only get one shot each year,” Burch added. “That’s why we’re so into our preparation and evaluation. We can’t make them breed. We just have to do everything we can to enable them.”