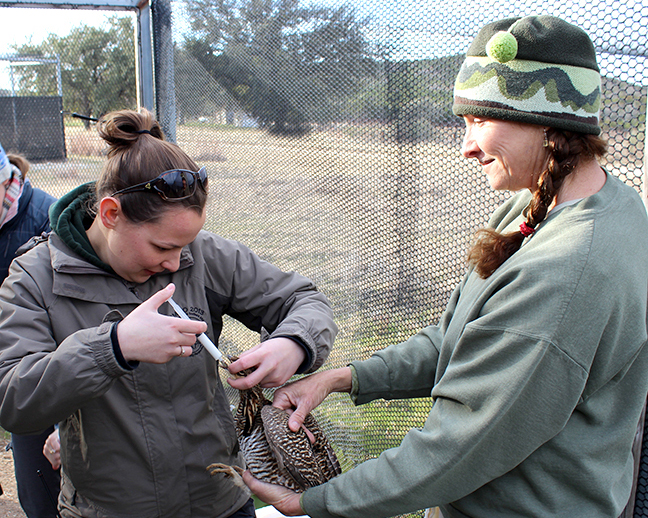 As she paves a professional pathway, Jolene Giacinti acquired valuable experience during her month at Fossil Rim Wildlife Center.

The veterinary preceptee, set to graduate in May from Ontario Veterinary College, arrived at Fossil Rim Jan. 4 and departed Feb. 5.

“Fossil Rim was recommended to me at a conference I went to,” Giacinti said. “Then, I looked it up online and applied. It’s actually different than what I thought it would be, in a good way.

“There are more immobilizations on a weekly basis than I expected. I had the chance to get plenty of experience in this area, especially with hoofstock.”

Giacinti appreciated all the application of what she has learned, which is what her final year of college is supposed to be all about.

“It is a super hands-on rotation for students, so that was really great about Fossil Rim,” she said. “It was usually me, (licensed veterinary technician) Lindsay (Cosmi), and (doctors of veterinary medicine) Julie (Swenson) or Holly (Haefele) with a hoofstock staff member, so I got to do a lot of blood draws, placed catheters and I was really involved in the anesthesia for immobilizations, as far as monitoring (vitals). I got to see so much and really enjoyed my time here.

“It was great practice and I felt like I was actually contributing. Being able to apply what you learn instead of just knowing it boosts your confidence.”

She had the benefit of learning from people who wanted to help her.

“Holly, Julie and Lindsay are great,” Giacinti said. “They’re really friendly, and you can tell that they all like to teach students. They were always quizzing me and teaching me about whatever was going on. If it was something I hadn’t seen, they’d talk me through everything and give me the resources to look it up.

“All the staff were very nice to talk with, and this is a unique experience for a vet student, especially coming from a school without a lot of focus on wildlife. I really appreciate it and wish I could’ve stayed longer.”

This was not the first extended stay in America for Giacinti, who is a native of Dundas, Ontario, which is a small town about an hour’s drive from Toronto.

“I had previously stayed in Pennsylvania for an eight-week clinical placement to shadow the vets,” she said. “It’s obviously a lot warmer in Texas than where I’m from, but other than that a key difference is a lot more access to game ranches and exotic species (because of the private sector). I’m used to small towns like Glen Rose.”

A particular experience stands out from her time at Fossil Rim due to the species involved.

“Coco’s anesthesia was very memorable,” she said regarding the southern black rhino. “I was fortunate to have been here during that time. I’d seen a field immobilization of a rhino in South Africa a couple of years ago, so it was interesting to see the differences.”

During her final week, Giacinti gave a lunchtime presentation to staff and interns entitled “Tuberculosis: Disease, Diagnosis and Relevance to Zoo Medicine.”

“The purpose of my presentation was to give an overview of what tuberculosis is and how it’s relevant to the people who work in the zoological field,” she said. “It’s something that Fossil Rim is constantly monitoring for and is important and definitely relevant here. Holly pointed out there has never been a confirmed case at Fossil Rim, which is great to know.”

Giacinti is well-traveled, experiencing valuable activities along the way.

“I’ve been to some student-oriented conferences, including one in South Africa for 20 days that covered a variety of topics and experiences,” she said. “I learned a lot about game farming and the role private ranching has in the conservation world. I spent some time in Yukon doing disease monitoring of the wild population there.

“I also went to the special species symposium, which provides students with an opportunity to work with some uncommon species that you don’t get exposed to in school. My time at Fossil Rim has definitely been the most clinically based experience I have had with exotic species.”

A highlight for her to this point involved eight weeks contributing to the World Health Organization (WHO).

“I was working in their neglected tropical disease department, which has a zoonotic branch,” she said. “Our main focus was dog-mediated human rabies, which is a big problem, particularly in developing countries with packs of unvaccinated stray dogs. Our research involved gathering data on the number of dogs and humans affected with rabies in WHO-member countries. Unfortunately, a lot of people do not have access to the medical care necessary to prevent and protect against rabies, which is a fatal disease.

“The data was approved by various ministries in each country, and then it was published in the World Epidemiological Record, a WHO-based report. The project was a team effort, and I am proud to have been part of it. The main message is that it is possible to eliminate dog-mediated human rabies.”

While going to class is a thing of her past, Giacinti will remain very busy this spring.

“I still have some core rotations to do at my school, such as surgery and anatomic pathology,” she said. “So far, I’ve spent a lot of time doing my elective rotations like this one at Fossil Rim. The first two years of vet college you are mostly sitting in class. In the third year, you get surgical experience.

“The fourth year is when you do the clinical component, so there are no classes. It’s all rotations lasting a week or more. Applying what you’ve learned is a totally different experience compared to previous years.”

After gaining insight into her future plans, it makes sense that Giacinti chose to do her Fossil Rim project on tuberculosis.

“I know that I’m interested in wildlife disease and conserving wildlife populations,” she said. “I think it’s important veterinarians are present (in that regard). I’m open to working anywhere, and what you deal with is very different depending on where you are in the world. There is always something new to learn.”