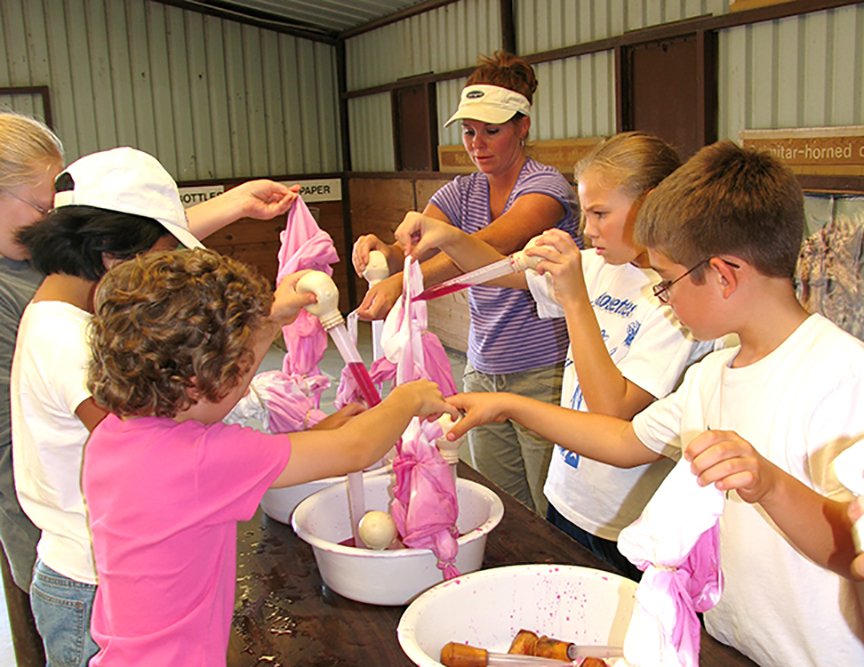 Wolf Ridge Nature Camp promises to deliver a howling good time at Fossil Rim Wildlife Center, if past feedback is any indication.

“I’ve heard that campers plan to come back and they put us on their two or three-year rotation,” said James Morgan, camp manager. “I’ve heard it’s one of the best campouts they’ve ever had, that campers are still talking about the experience several years later. I’ve never heard a bad word said about our camps.”

There are overnight camps for schools, scout troops that aren’t pursuing badges or numerous other groups such as 4-H members. Variety is provided based on the combination of three programs chosen from the 15 options overall.

“Badge camps are a great opportunity for groups to come out and earn a badge that deals with nature or wildlife – basically something that a scout couldn’t do in his or her backyard,” Morgan said. “A lot of folks come from the big cities. We teach for the badge, and we steer teaching toward hands-on activities.”

Morgan touched on several of the numerous badge options.

“Some examples of popular badges for Junior Girl Scouts include the Animal Habitats Badge, as well as the Geocaching Badge that involves fun hiking trails,” he said. “Girl Scout Cadettes can do Night Owl Badges, which are really cool. We talk about things like nighttime adaptations that animals have, such as bigger ears and eyes.

“Another popular Cadette badge is the Animal Helper Badge. We don’t have service animals at Fossil Rim, but they are certainly welcome, and we talk about the variety of ways they help people.”

Regarding Boy Scouts, Morgan pointed out the popularity of the Outdoorsman Badge and the Naturalist Badge for Webelos.

As for the program options, Morgan highlighted five that have proven to be hits.

“One of the most popular programs is called Capture Techniques, and it has a safe blowdart activity,” Morgan said. “We talk about the dart gun used at Fossil Rim, the darts themselves and the chemicals we use. We show the campers a catchpole and the nets that are used. Another program that’s really popular is Brink of Extinct.

“It talks about the things humans are doing that affect the endangered animal species we have. Natural Dye is a program where we use the cochineal bug to tie-dye a pillowcase, t-shirt or bandana. It creates a dye that can be used in items like food and makeup.

“The Lorax is a program where we act out the book with the help of the kids, which is really cool. Fact Or Fiction is where we talk about animal misconceptions, such as whether or not ostriches really stick their heads underground.”

A term has been coined for the experience of staying in the Wolf Ridge Nature Camp bunkhouses.

“Our Girl Scouts call it ‘glamping,’” Morgan said. “That’s glamour meets camping. You’re camping without having to sleep in a tent or on the floor.

“You have a bed, hot and cold running water, showers, plus some cabins have heat and air conditioning. It’s much nicer than what you might envision with a normal campsite.”

Guided nature hikes are a staple of the Wolf Ridge experience.

“It’s usually an hour-long hike, and we talk about trees like Ashe juniper, yucca and oak, as well as a lot of the native wildlife,” Morgan said. “Many of these kids don’t generally have the option to get out in nature, so we try to capitalize on a lot of that.”

The ever-popular guided tour is done for campers as well.

“Guided tours are an opportunity for folks to get out in the park and see why Fossil Rim exists,” he said. “They can enjoy the animals and interact with them. Each camper gets a cup of feed. If the group is entirely more than seven years old and it doesn’t have more than 26 people, I do take them into the (Jim Jackson Intensive Management Area) if they want to do that in place of one of their programs.”

S’mores are a tasty option for campers.

“We’ll have a campfire outside if possible; and as long as the group brings the s’more fixings we can certainly do that,” Morgan said. “If there is a burn ban, we can have a fire in our wood-burning stove.”

Speaking of food, mealtime can be downright delicious at camp.

“We provide breakfast and dinner each day in the Overlook Café,” Morgan said. “We’re talking lasagna, salad and toast, for example. For breakfast, it could be hash browns, sausage, eggs and biscuits.

The camps are generally run by Morgan and the education interns, but education staff members Katie Hunholz, Mark Phillips and Tessa Ownbey, director of education, also contribute as needed.

“We are going to have some changes in terms of some new programs this year,” Morgan said. “Even experienced campers at Fossil Rim can look forward to some unfamiliar programs.”

Morgan stressed the importance of planning to partake in the Wolf Ridge experience well in advance.

“I highly recommend for people to reserve their overnight camp 4-6 months in advance,” he said. “Our camps are available to reserve every day of the year except for Thanksgiving, Christmas, Christmas Eve and Spring Break.”

For more information on the overnight experience at Wolf Ridge Nature Camp, email education@fossilrim.org or call 254.897.2960.