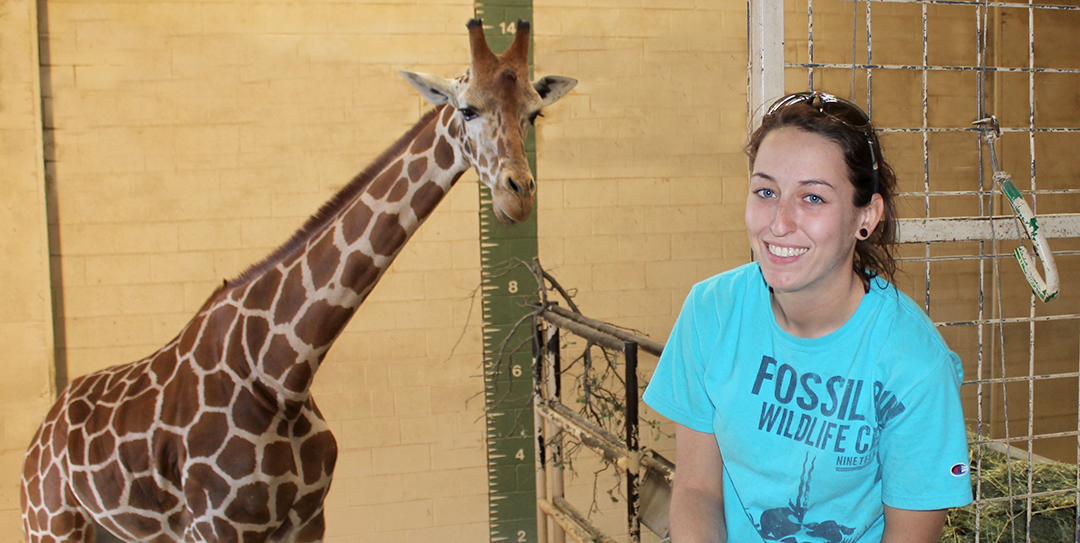 There are more than 50 species of animals at Fossil Rim Wildlife Center, but perhaps none that loom larger in stature and popularity with visitors than the giraffes.

Roaming the 266-acre Game Preserve pasture, there are four adult females, a bull, a neutered male and a female calf. At night, they can be found in the giraffe barn, which consists of a main barn area, bull room, supply room, loading chute and a fenced outside yard. The tallest giraffe stands nearly 16 feet, but still has plenty of clearance inside.

“The loading chute isn’t often used,” said Molly Shea, animal care specialist and primary giraffe caretaker. “The bull room is a place where we can separate the bull off on colder nights and he won’t be pushy over food or territory toward the others. The room can also be used for moving animals in and out, since the wall can be pushed out to expose the loading chute for a trailer. The equipment room has various tools for cleaning or feeding, plus daily feed storage.”

Whether or not the giraffes are in the barn is based on temperature and weather conditions.

“Some animals need heat sources in the cold weather like our giraffes, rhinos and addra gazelles,” Shea said. “Typically, if it’s below 50 degrees the giraffes won’t be allowed to leave the yard. You can often watch their behavior and tell where they want to be.

“On the rare occasion it’s below freezing, that’s when we would consider locking the giraffes in the barn. I constantly check the weather during the day to adjust the plan for them as needed.”

On a typical winter day that’s not especially cold, the giraffes are released into the Game Preserve in the morning and then Shea begins the process of rounding them up at 4 p.m.

“But in the summer, they stay out almost entirely day and night,” she said. “Occasionally, we’ll still bring them in to keep them in the habit.”

The afternoon roundup usually takes anywhere from five to 45 minutes with several variables in play. It involves her slowly urging them forward as she follows in her staff truck.

“It depends on where they are, how enthusiastic they are to go inside and how many distractions there are,” Shea said. “If there are cars stopping, we’ll let the giraffes go over to feed.”

A recent roundup saw the giraffes distracted by a nearby backhoe, while other animal species can divert their attention as well.

“You know how close you can get to each giraffe to make them move without spooking them or stopping them, so you try to keep them going in the right direction,” she said. “The great thing about these guys is they’ve been doing this so long that they know their destination is a barn full of food, so it’s a positive experience for them. For the most part they move as a herd, but occasionally one or two will take their time or get confused toward the end.”

“We don’t want them to go in the barn and wonder why they did,” she said. “They go in there to eat and that’s what they know. Hats off to the person who originally taught them that returning to the barn means food.

“It couldn’t have been easy that first time, because we’re talking about leading generally skittish animals to an unknown building. But now that they know there’s food, it’s much easier on me. There is a little bit of training with (the calf) ‘Nyla,’ but for the most part she learns from the herd and follows.”

Nyla was born in April 2015. With Shea arriving in August 2013 as an intern and transitioning to full time in animal care in August 2014, she’s seen the young giraffe develop from day one.

“To see Nyla grow is really cool because she’s learning to be a giraffe and work with the herd,” the Wisconsin native said. “I enjoy seeing all the other herd members interact with her and teach her where to go. I remember when she discovered browse, playing with the leaves in her mouth and not even ingesting them.”

Speaking of browse, it is vegetation eaten by animals that includes leaves, twigs, shoots and such.

“Right now, there’s live oak browse that we cut and give to them,” Shea said. “Post oak, red oak and pecan browse are options, as well as bamboo. If other options are scarce, when they’re out in the Game Preserve you may also see them eat some cedar (browse) or grass.”

Browse is fed on the yard fence and in the barn. Other barn food includes a low-starch wild herbivore feed and as much alfalfa as the giraffes want. There’s also a feeder near the barn elevated out of other species’ reach that holds alfalfa.

When Shea interacts with the giraffes in the barn, it’s always done from a platform above the supply room at their eye level for her safety.

“Barn cleanup is scheduled twice a week, but we’ll do it more often if necessary,” she said. “There are four cameras so we can see nearly every portion of the barn. It’s really cool to be able to observe them even when I’m off the premises, and there’s an app I can either pull up on my smartphone or computer.”

When a medical procedure is required, Shea said it is actually best to get the giraffe out in the open pasture.

“One of the cool things about our giraffes is they are functioning like a herd in the wild,” Shea said. “We don’t do many vet procedures with them and they maintain themselves really well.”

Giraffes pay very close attention to their surroundings despite being much larger than nearby animals and people.

“I was surprised when I saw how observant and aware they are,” she said. “They’re very cautious animals. Like if we clean up an area of the pasture to remove dead trees, for example, they really notice it the next day and might not even go in that area.”

“I always knew animals would be a big part of my life,” she said. “I was working at a pet store when I researched what I wanted to study in college, and my dad was like ‘why don’t you do something with animals?’ I started looking at my options to better animals’ lives with a conservational purpose. Later on, I was directed to Fossil Rim by Santa Fe College Teaching Zoo where I did all my training.”

From Wisconsin to Florida to Fossil Rim, Shea has found a home while striving to ensure the wildlife center’s giraffes continue to thrive.