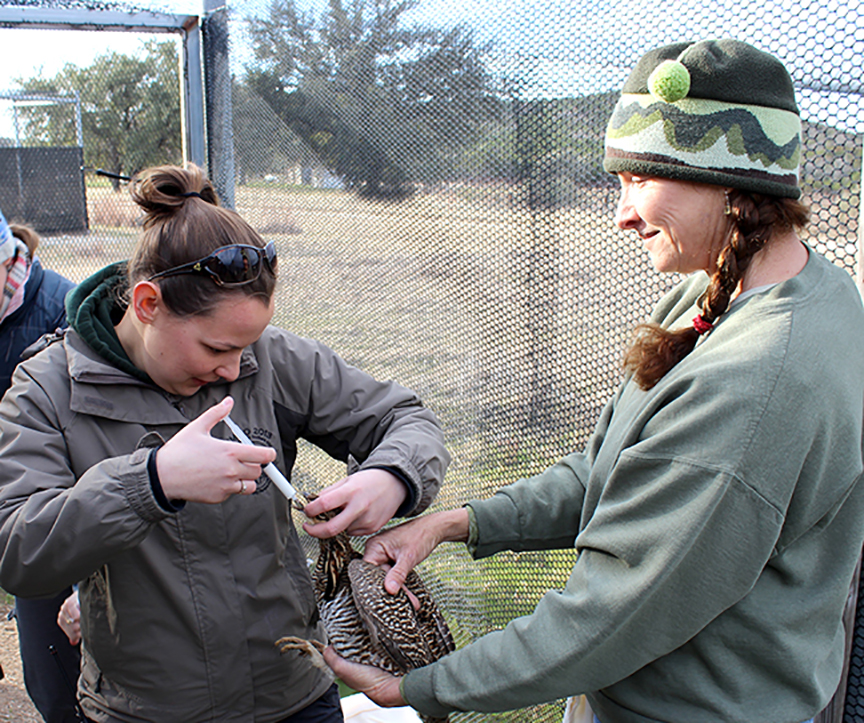 Breeding season is on the doorstep for the endangered Attwater’s prairie chickens (APCs) inside the Jim Jackson Intensive Management Area at Fossil Rim Wildlife Center, but before impressing a mate there are other tests to pass.

“The first thing we do is identify the bird with their leg band number,” Haefele said. “We have a list of birds that Lindsay Cosmi (licensed veterinary technician) is running with information on their age, sex and notes on their history of medical issues. Then, we do a complete physical exam. We look in their mouth, eyes and ears.

“We assess body condition based on how much muscle they have over their keels, palpate their coelom, look at their cloaca and evaluate overall feather quality. Next, we draw blood to test and we deworm them both orally and via injection, as the two act synergistically.”

The blood is primarily drawn to evaluate for the presence of the life-threatening REV Virus.

“We test all of them for REV, which can significantly affect captive APCs in general,” Haefele said. “It spreads easily and can cause cancer. At this point, we’re reluctant to release positive birds (into the Attwater Prairie Chicken National Wildlife Refuge).

Haefele recalled when Fossil Rim felt the brunt of the virus.

Fortunately, the test results are generally much less dire.

“Typically, we may have one or two birds test positive, but sometimes we don’t have any,” Haefele said. “There have been a number of positive birds recently at another facility taking part in the program. There’s some evidence that mosquitos can play a role in the transmission, so in a wet year you might expect a higher number of REV cases.

“We test the blood, but you can also get a diagnosis if the animal has a tumor consistent with REV. You can test their liver, which is not something feasible for a live bird.”

To a novice’s eye, most of the birds seem calm as their blood is drawn.

“We are lucky that the birds tolerate it pretty well when we draw blood,” Haefele said. “They don’t tend to jump when you stick them, but having someone who is experienced in holding them (like Johnson or Burch) is key. The birds do have different personalities, so some react differently. Birds typically have one prominent jugular vein on the right, so we go there to draw blood for ease of access.”

Before the birds were evaluated, they had to be caught in their pens with butterfly nets wielded by Johnson and Burch.

“Being able to catch the birds comes with practice along with trial and error,” Johnson said. “Some days we do it well and on others we could both be off. (Jan. 26) went okay. From my perspective, we’re just looking at overall health and watching how the birds react to what they’re experiencing (during this process).

“Are they flying well, are they alert and are they responsive to us when we go into the pens and invade their territory? If a bird is too easy to catch that will get my attention, but like Holly was saying they are all individuals. Especially some of the older birds might be easier to catch because they know the routine.

“We absolutely feel pretty good about the health of this flock. Hopefully we’ll get good results back from this bloodwork.”

According to Haefele, every bird gets handled at least three times per year.

“There’s post-breeding season in June where they get full physicals, deworming and bloodwork before we start sending chicks to the refuge,” Haefele said. “You can’t do a full test panel on chicks that hatched in late April or later because they are too small, so we evaluate the whole flock instead to make educated assumptions about the chicks. Every bird gets handled again for physicals and deworming in October, because that’s when we make exchanges with other institutions for breeding. Today is the third occasion, which marks the beginning of the (APC) season.”

There are usually 60-70 APCs at Fossil Rim during breeding season. This year, there are 61, including 31 hens. A hen will lay 15-18 eggs in its first clutch.

If she has a second clutch in a season, it will include 9-12 eggs. There is a 78-percent survival rate for eggs at Fossil Rim during the last five years, as well as a survival rate of 75-80 percent for chicks.

This year’s flock includes everything from 2015 chicks to an APC that will turn eight years old in 2016.

“The (Species Survival Plan coordinator) and the studbook keeper look at all the genetics of the flock,” Johnson said. “The most important thing is maintaining the captive flock, so they hold back the birds that will produce the best genetic diversity in the future. All the birds beyond that go into the release program.

“One of the nice things Fossil Rim does because we have the space for extra birds is that we hold them for the program, including geriatrics or those with medical issues. We are a safe haven for other (institutions), so not every bird here (Jan. 26) will be part of the breeding program next year.”

The coming months are a demanding time for the APCs.

“The breeding season is a big physiological draw on these birds,” Haefele said. “The males display every day, and it takes a lot out of them. Then, for the hens to lay eggs is exhausting. We just want to make sure they’re all healthy and set to go.”

It is about to become crucial as to which birds interact with one another.

“During the offseason, they live in groups and go where they want to some degree, but after these test results (are ready) they’ll get separated into their breeding pairs with two birds per pen to assure who the parents are,” Haefele said. “It’s careful management in the name of genetic diversity. All birds are in a computer program and paired with the bird they are least related to. When you have a population that started with 19 founder animals, there is a limited degree of genetic diversity so you want to make that decline as slow as you can.

“We certainly emphasize genetic diversity in this case with such a tiny population. The only reason this bird is in the wild is because (release program members) put them out there every year. Survivability to the next breeding season in the wild is only about 20 percent, which is actually really good for a gallinaceous bird bred in captivity.”

With the animal care specialists catching and holding the birds while the vets evaluate them, Cosmi carefully labels and files each blood sample vial.

“We give Lindsay a blood sample, and she immediately puts it in a vial with anticoagulants,” Haefele said. “It’s a very important job to keep the correct sample for each bird. If you did have a (REV) test come back positive, you want to make sure you know which bird it was. When we do the June evaluation, we end up with four different vials per bird and each bird has three different (ID) numbers, so organization is crucial.”

Right around the time humans celebrate Valentine’s Day, the APCs will be paired as well. The male APCs are already “booming,” or strutting and calling, during their courtship display. They will soon be assigned their genetically correct “blind date” via computer.

“Once we get the test results and hopefully the ‘all clear’ from our vet department, we’ll actually put the pairs together that have been chosen by the studbook keeper,” Johnson said. “That could be as early as mid-February.”