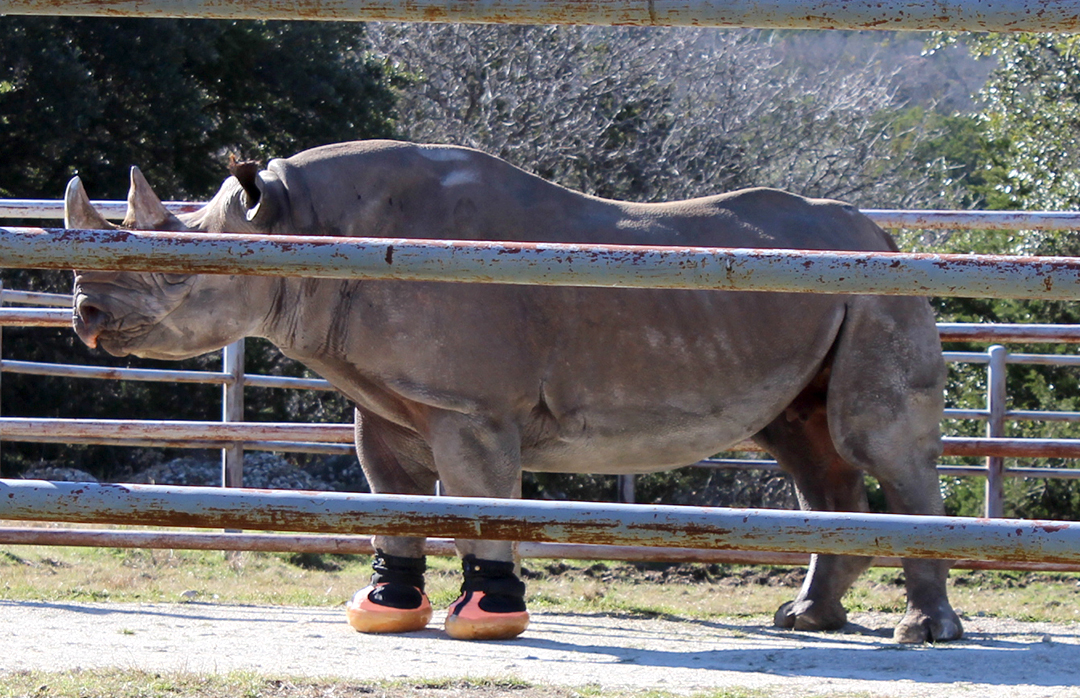 The boots, orange and black creations courtesy of Diceros Boots LLC President Christine Bobko, weren’t Coco’s first foray into footwear, but they were unanimously deemed the best option for her two front feet, which each suffer from recurrent lesions. For the full story on Coco’s introduction to the Diceros product, check out http://wp.me/p3oqTk-lt.

While the custom-formed elastomer boots are still in the development process and thus lasted about one week on Coco’s feet, a new, upgraded pair was already in the works in Denver thanks to Bobko and her husband, Brian Teasdale, Diceros engineer. The treatment boots were shipped to Fossil Rim so they could be applied Jan. 13.

Like the first pair, the new boots are the same colors with a urethane sole and an upper made of orange silicone and black Gore-Tex.

“Some major changes included covering the buckle apparatus, which got ripped off of the last pair,” said Justin Smith, Fossil Rim senior animal care specialist and lead rhino keeper. “We also changed the type of Velcro that was being used to adjust the boots’ tightness. The majority of the failure with the last boots dealt with the bottom part, which is the sole. There is now material embedded in the upper that goes into the sole as well, which is important because very few adhesives bond to both silicone and urethane.

“The stitching itself between those two components is now tougher because it’s covered with urethane instead of being exposed. This boot version has a much tighter fit with the same wrapping and padding features.”

Bobko mentioned another change, which involved incorporating a protective liner on the inside along the zippers that provides protection from possible skin abrasion.

Before the boots went on, Coco needed to be immobilized inside the black rhino barn and have her front feet cleaned. Dr. Dustin Dorris, a Stephenville-based equine veterinarian, attended to her feet while others addressed further needs.

“As compared to (her feet Nov. 30), there was much more uniform granulation tissue this time, which tells us there’s less infection, less damage and more healing,” Dorris said. “The lesions were much deeper last time with more nerve involvement. (Jan. 13) was a big day, as far as her treatment goes, when you consider where she was when the first boots went on.”

With the hope the boots would stay on for weeks at a time, Dorris’ cleaning efforts were crucial.

“I mainly do wound debridement, either taking out tissue that has lost blood supply or that which is harboring dirt and debris,” he said. “We remove all that portion of the lesion, which allows our antibiotic perfusion to breach those areas.”

“I drew blood, but I also prepared to inject the antibiotics into each limb,” Haefele said regarding the perfusion while Dorris cleaned each respective foot. “It made sense to use the same vein (for each purpose).”

In order for them to perform the perfusions, Adam Eyres, Fossil Rim hoofstock curator, tautly tied a black bicycle inner tube around each leg one at a time.

“He applied the tourniquet so that we could inject the perfusion into the distal part of the limb,” Haefele said. “That keeps the antibiotics at a high concentration in a designated area.”

“The x-rays looked no worse than before, and it’s good to have the previous images for comparison,” Stephens said. “Dustin cleaned up the wounds and we repacked them. They weren’t as deep or as infected this time, so we made a lot of progress. We will continue to repeat this process and evaluate new x-rays, hoping each time the wounds get shallower until they seal up.

“I think this was the first time we’ve seen her (foot tissue) granulate correctly, which is important. We weren’t getting debris up in there when the first pair was holding up. I wish we would’ve had these boots 10 years ago for Coco’s sake.”

Though a foreign object, likely an old bone chip, can be seen in x-rays of Coco’s right front foot, it is not as alarming as it may seem.

“While it seems to have been there a long time, it doesn’t appear to be a problem because we don’t detect (negative) changes in that area,” Haefele said.

“Julie did that for several reasons,” Haefele said. “First, we wanted to have access for IV drugs like pain meds, as well as additional immobilization drugs if needed. We also use that site for IV fluids, plus we’re using arterial blood to measure Coco’s blood gases. That tells us how well she is ventilating – breathing and oxygenating – her tissues during the procedure.”

When the time came to apply the boots, Haefele, Eyres, Smith and Dorris pooled their efforts to slip the conforming footwear over Coco’s bandaged feet.

“It took more effort to put the boots on this time, but I think that could just mean they fit better,” Haefele said. “I think everything went as well as expected (with the procedure). We just hope we can keep this pair on longer than the previous boots – ideally two to three weeks.

“Then, we’d clean her feet again and put the boots back on if they were still in good shape. If we can keep the wounds clean and let them heal, hopefully she’ll feel more comfortable and want to stand normally.”

Haefele noted how well this group is executing this particular procedure.

“Now that we’ve done the same thing a couple of times, it’s easier since we know the procedure and everyone has jobs they are proficient at,” she said.

For Stephens and Dorris, it’s a departure from their everyday equine schedules, but a road trip they welcome nonetheless.

“It may be work, but it is fun to come out here,” Stephens said. “It’s good for our minds (to deal with a different animal species) and nice to help out. Each of us sees different things in our practice, so we can modify our methods to help (Fossil Rim staffers). Sometimes, it’s a collaboration of what we know and what they know, and we find a happy medium.

“Even dealing with horses, when you see something new you call your (colleagues), discuss it and ask for advice. There’s always a little bit of ‘what if.’”

Bobko said the adversity for the first pair of boots gave her and Teasdale a greater understanding of what areas of the boots needed to be reevaluated to make them more durable.

“With the help of the Fossil Rim staff, several ideas for securing the urethane bottoms came out of brainstorming together, and we took those concepts and incorporated them into the second pair,” Bobko said. “True innovation does not occur in a vacuum, and that is why we are so grateful for the support and collaboration with the staff at Fossil Rim, as well as Dr. Stephens and Dr. Dorris. I feel that together we are going to find a truly innovative product that will potentially help many other animals.”

“The boots are still on,” Smith said. “There are a few stress cracks on the outside, but each boot is still in-tact with just the day-to-day wear and tear you would expect with a 2,500-pound animal. If you look at the last pair, you see a night-and-day difference already.

“Last time, at six days I was actually taking the boots off because the urethane soles had ripped off. The sole of one of the previous boots was hanging off after four days.”

The right boot eventually came apart and was removed after nine days, but the left boot was still going strong as of Jan. 26. Haefele said it’s the longest any footwear has ever lasted for Coco and thus undoubtedly another step forward for both Diceros Boots and the black rhino herself.

Meanwhile, Bobko and Teasdale continue to work on upgrades back in Colorado with a third pair to come.

“We couldn’t expect this pair to last forever, plus they are building another pair,” Haefele said. “They did send us some materials to patch this pair if they need a little work. Justin has a good enough rapport with Coco that she will present her foot and let him do some things to the boots without having to sedate her. There probably aren’t many animals that will be as tough on these boots as Coco, so this process is helping (Bobko and Teasdale) develop a quality product while giving us a chance to have comfortable, custom-fit boots to help Coco.”

Smith continues to communicate often with Bobko and Teasdale, keeping them updated on Coco’s status.

“He is able to send us photos of the boots, and we have had several conference calls after work discussing what he is observing with this entire process,” Bobko said. “He actually brought tears to my eyes when he told me how Coco’s behavior has changed in a positive way since she received the second pair of boots. That is the entire reason for this journey, and being able to assist in Coco’s recovery from foot issues allows me to keep my promise to my beloved rhino ‘Mshindi’ that I would ‘figure it out’ so we don’t lose any other rhinos due to foot problems.”