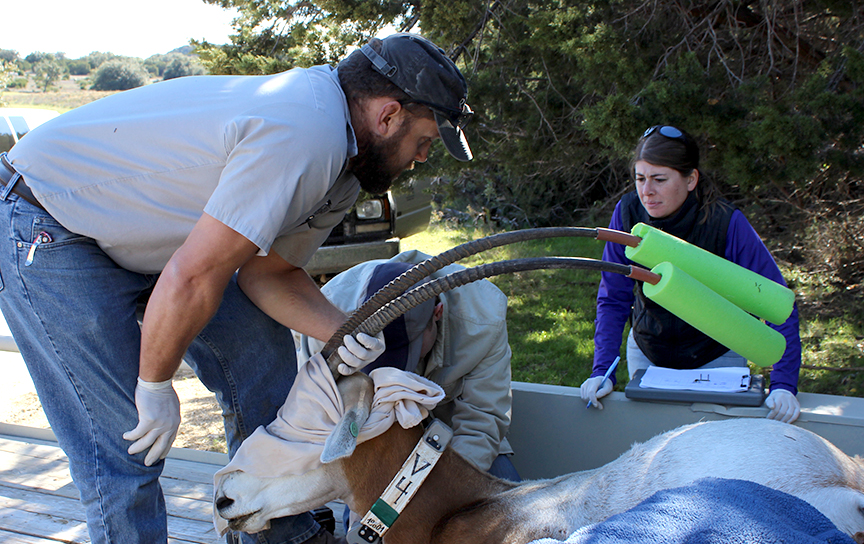 With a species currently extinct in the wild ramping up for reintroduction to its native Chad next summer, there’s a lot on the line for the human parties involved.

Several groups of scimitar-horned oryx (SHO) will be released over time and monitored by GPS radio collars. But first, Fossil Rim Wildlife Center, Smithsonian Conservation Biology Institute (SCBI), Environment Agency – Abu Dhabi (EAD) and Sahara Conservation Fund (SCF) among others need to know how the animals react to these collars regarding behavior, grazing activity and time under collar habituation.

“Basically, we have three phases: before collars, collar treatment and after collars,” Cunningham said in regard to each four-week stage. “I’m going to be recording the same types of data across the three phases, as far as one-hour activity scans and three-minute focal videos of the subject animals grazing. There are 10 animals I’m looking at. The bull is going to be his own case study, because we don’t have another bull to compare him to.

“Additionally, there are three groups of three females: a Vectronic collar group, an ATS collar group and a non-collared control group. We will compare all three groups to see if there are any differences in the proportion of time spent on each behavior under investigation, and also attempt to determine the number of times an individual lifts her head while grazing along with the number of bites per step. As far as the collar habituation, I’m looking for behaviors we’ve determined to be discomfort indicators.”

The goal is for the chosen collars to last 4-6 years upon reintroduction, so this study was deemed crucial with a lot on the line.

“Since they will be collared when released, and there hasn’t been a lot of research on how collars may or may not influence behavior in animals, SCBI and Fossil Rim combined our efforts to do a preview of what we could learn in captivity to apply to the release,” said Adam Eyres, Fossil Rim hoofstock curator.

Jared Stabach, SCBI postdoctoral research fellow, made the trip to Fossil Rim with the collars for their application Dec. 16.

“We want to evaluate fit, function and potential adverse effects,” Stabach said. “The last thing we want to do is release animals into the wild and then have mortality caused by these devices. Are the animals changing their behavior in any way? That’s what it comes down to with Stephanie’s project.”

“We considered Fossil Rim’s lengthy history with scimitars,” Stabach said. “We also recognized the experience of their husbandry staff, which was confirmed during immobilizations to fit the collars.”

Eyres said there was an expressed desire to see what the collared animals would do in a large acreage pasture that Fossil Rim could provide, as opposed to a smaller space.

“We wanted to achieve some level of similarity to their experience in the wild,” Eyres said. “From the SCBI side, Jared extensively tested the functionality of the collars as much as he could before we ever put them on.”

Each collar, which records the animal’s movement, is set to collect a position every 15 minutes. Collars are scheduled to automatically release from the animals Jan. 18.

“Even the movement of the animal’s head up and down is being recorded by an accelerometer within each device, and every second is accounted for,” Stabach said. “By comparing the data that Stephanie is collecting, there’s potential to understand what the recordings from the collars mean. If Stephanie can match the time of recording a videoed activity with the collar data, we can identify subtle differences in activity within the data and gain greater insight into what is actually happening with a particular animal. We narrowed down our search for the appropriate collar for this study to two collar manufacturers, and are evaluating each company.

“Our human relationships with each company are a consideration. These collars could last 4-6 years in the wild, so it will be a lengthy association with the chosen manufacturer. We’ll evaluate the feedback from each company and how well they address issues that may arise, such as collar fit.”

Cunningham will present her research findings in the spring, while the first release in the summer will include 25 animals. Each animal, of the initial 100 scimitar-horned oryx released, will be fitted with a collar to monitor movement and survival. Eyres and Stabach each emphasized the value of this research.

“The information that Stephanie and Jared will be getting from this project will be critical to the success of the collaring and monitoring of animals in Chad,” Eyres said. “There are still unanswered questions at this point, but hopefully when this project is completed, we will have helpful insight for the remaining steps. This is the type of work that is perfect for places like SCBI and Fossil Rim to add value to conservation. It is great that we can monitor and study these animals in a captive, and therefore more controlled, environment before collaring and releasing them into the wild.”

Stabach pointed out that studies of this nature aren’t often done.

“People usually purchase collars, put them on the animals and there isn’t much of an evaluation done beforehand,” he said. “This is an opportunity for both of our institutions to invest some money and time to see what effect these collars have on the animals. Then, share that info with these companies in an effort to improve collar design.”